Is the imagination pure? Cassandra’s end, in the Greek myth, is a night just beyond the grasp of justice; her eyes become her fatal calling, for her vision of the Fall of Troy frightens the men around her. Even ‘the gods,’ Apollo.

A heart cassandras into the galaxy of night.


This is a space where we invite women (and their others) to imagine ‘culture’ as a site of contention and possibility, or even, superluminal travel. Etymology of ‘Sanskriti,’ or the word for culture in Bangla, suggests contested territory—Sanksritization an entangled, historical process of sedimentation. Culture has its befores and afters, but as traces in the blinding present.  Encountering the real as an account of the day by night, we invite pieces short or long form essays (creative non-fiction), hybrid pieces that may be dialogic (i.e. hyperlinked stories, letters between those who identify as ‘sisters’), short reflections (dairy entries, etc.), aphorisms/parables, vignettes, even morpheme-experiments. We like the uncanny, forbidden places of the mind; where liberation and theology/spirituality meet mad studies? Multi-modal approaches are welcome, especially those that make use of the spatial or visual form alongside text.

Contact us at communications-dhaka@goethe.de. Please allow us 3 weeks for a response, but let us know if your work is accepted elsewhere. We have a pay scale for pieces and their illustrations.

© Seema Amin Seema Amin writes and occasionally performs; she is the author of two poetry books (UPL) and was Senior Feature Writer of the art magazine Depart. Her first home was Bangkok, Thailand but she lived across Europe, Asia and the US before re-inhabiting Bangladesh, where she teaches literature. Presently, she edits Cassandra’s Eyes and is in the process of publishing her third manuscript. Several of her poems from the latter are being published this year, in The Aleph Review and in an upcoming anthology, Quicksand Borders. 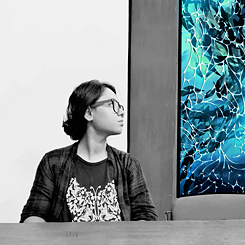 © Farzana Islam Farzana Islam is currently an undergraduate student of English Literature at BRAC University. She is an independent artist working in traditional and digital media, and has worked with BYEI (Bangladesh Youth Environmental Initiative) in various creative projects as a creative insider. Taking inspiration from the real and the abstract, she aims to create a liaison between the two in her work, often integrating the people and experiences in her life into them.

Back to Cassandra’s Eyes