Monika Treut is considered to be one of the pioneers of Queer Cinema. In this interview the film director and producer talks about positive developments in western societies, repressive trends and things that aren’t quite running as they should. 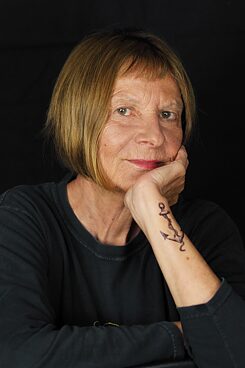 Monika Treut is an author, director and the CEO of Hyena Films in Hamburg. Her movies and documentary films have received international acclaim and have been awarded prizes in countries including Italy, Brazil, England and Greece. | Photo (Detail): © Monika Treut / Salzgeber Ms Treut, you are considered to be a pioneer of Queer Cinema – so what does “queer” actually stand for?

The term “queer” encompasses everything that falls outside the confines of heteronormative society. When Queer Cinema first started in the 1990s, queer still had a derogatory meaning. Since then the lesbian and gay community has redefined the word and now uses it confidently as a self-description that is accepted in most western countries today.

Does approval of this term also reflect a generally higher acceptance of other life plans?

The liberal part of society in Germany has all its ducks in a row, showing an increasing interest in the queer way of life and recognising its enriching character. The general mood in German society in this regard is positive. But of course there’s also a kind of culture clash. In the conservative and nationalist circles, where family is considered sacred, divergent identities are still pilloried: for instance the party Alternative für Deutschland (AfD) in Germany, the Front National party in France and politically influential communities in Hungary and Poland do not accept the queer approach to life whatsoever, viewing it as an attack on civil society. Of course the Catholic church plays a certain role there too.

So which countries stand out for positive reasons?

Argentina is a world leader where the rights of lesbians, gays and trans people are concerned, and also with regard to artificial insemination and adoption. In the USA it depends a lot on where you are: in New York things are very different to how they are in somewhere like Arkansas.

What is the status regarding the rights of queer people in Germany?

In Germany the social climate for the queer community is on the whole good, although of course even in this country people in some places are less tolerant. But work still needs to be done on a legal level. Adoptions for example are still very complicated and time-consuming for homosexual couples, and for trans people changing civil status can in some cases be a degrading process. They ask questions that really go below the belt.

After three months in the village cinema the misgivings were dispelled: the film “Von Mädchen und Pferden” is set in a rural area where no one used to pay any attention to queer issues. | Photo (detail): © Edition Salzgeber What role does cinema play in this? Can films have a positive influence on public opinion?

They certainly can. Here’s a good example to illustrate this: We made a film – Von Mädchen und Pferden (Of Girls and Horses) – about young lesbian girls near the German-Danish border. It’s a rural area where family-run farming businesses rely on support from their offspring – work needs to be done and animals have to be cared for. To begin with it was quite a controversial topic. And then the film ran for three months in the village cinema, and gradually everyone saw it and was captivated by it. Before that queer issues were simply unfamiliar territory to these people, so they rejected them to begin with. But once they had more experience of them, that all changed – they just hadn’t had contact with and access to individuals with a different sexual identity. It was fantastic to see this transformation. Now our film team is very welcome there and we even have family connections.

The Oscar-winning film “Brokeback Mountain” achieved the breakthrough for Queer Cinema. | Photo (detail): © picture-alliance / Mary Evans Picture Library Queer films used to have a political agenda. Rosa von Praunheim for instance called for society to come to terms with sexual identities and lifestyles other than heterosexuality in the early seventies.

Yes, that was a declaration of war. And an appeal to gays and lesbians to become politically active. In those days homosexuality was considered a smutty niche topic. It wasn’t until 2004 that a breakthrough was achieved with the film Brokeback Mountain, which even won an Oscar. Since then the subject has become entirely the norm in society – especially as the film was made by a high-profile heterosexual director. Queer Cinema now belongs to the mainstream in western societies. Not least because streaming services like Netflix show films in this genre without a second thought. Even on a public broadcasting channel like rbb you can regularly see queer films – that’s a relatively new thing. When Elfi Mikesch and I showed our film Verführung: Die grausame Frau (Seduction: The Cruel Woman) at the Berlinale in 1985, we were still extremely unpopular for it. We needed to defend ourselves properly as a suppressed minority. Things have changed a fair bit there over the past 35 years.

If all the doors are essentially open – what does Queer Cinema still hope to achieve in political terms today?

That’s a good question. In this country there’s plenty of tolerance, liberalisation, understanding. We live in luxury here, in terms of liberal opportunities. But the queer movement is internationally focused. The community keeps a close eye on where LGBTQI+ people are being persecuted and experiencing reprisals. They watch out for this at the Berlinale too. Filmmakers from affected countries are encouraged. For instance this year there was a queer film from Lebanon.