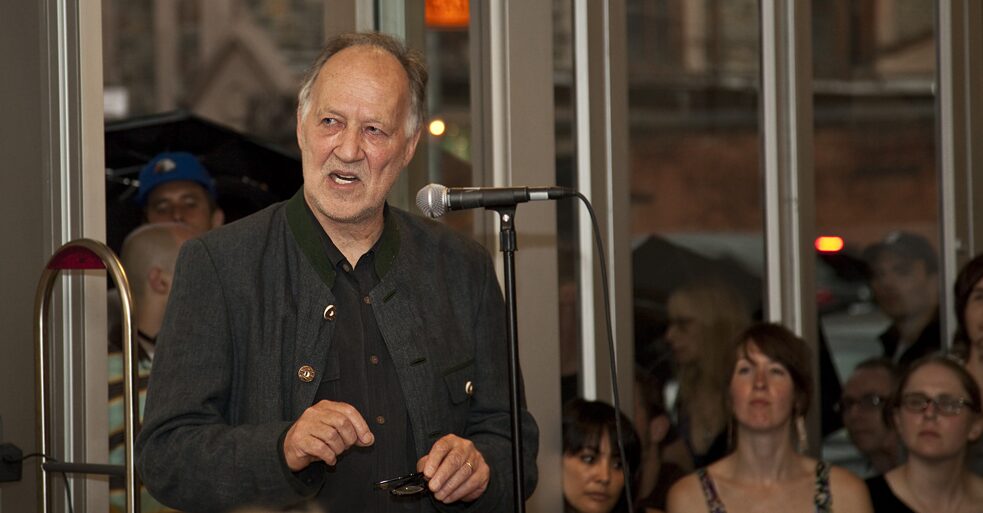 Most people only know Werner Herzog as the crazy director who worked with the insane and highly controversial actor Klaus Kinski. On September 5, 2022, he celebrated his 80th birthday. The Goethe-Institut honors him with a film series on Goethe on Demand.

In Germany, at least until recently, Herzog had been famous – and infamous – almost exclusively for his work with Klaus Kinski. It can therefore come as no surprise that My Best Friend (1999), Herzog's personal retrospective of the five films he made between 1972 and 1987 with the actor, who died in 1991, was his most popular work to date.

During the three years of filming Fitzcarraldo (1982) with Kinski Herzog fell into somewhat of a creative slump. He was presumably also exhausted by the endless personal attacks he was forced to deal with in Germany regarding the film Even Dwarfs Started Small (1970), in which he apparently took advantage of defenseless people to tell his cinematic tales. Looking back on it, most of these attacks, which reached their zenith with Herzog being labeled a “fascist”, were incomprehensible, but in the 1970s and 80s any of the more balanced voices on the subject were drowned out by the louder rants of abuse.

Herzog ended the state of his personal crisis and public misunderstanding by expatriating to California in the 1990s, where he lives to this today. More or less unnoticed by the greater public there, he was able to fashion a new career for himself that was more focused on documentary films than on feature films – stylistically profound and staged documentaries. His breakthrough in the genre was Grizzly Man (2005), which received various prizes in the USA and was enormously successful abroad – except in Germany. Herzog is a star in the USA these days. His German accent is the butt of jokes in all possible forms of media. In 2009, Time magazine selected him as one of the top 100 most influential people of the year. The only other German in the list was Angela Merkel.

The epitome of auteur filmmaker

In Germany, meanwhile, people first refocused on Herzog at the beginning of 2010, when he chaired the international jury at the Berlinale, a film festival, and at the same time donated a collection of his life works to the Stiftung Deutsche Kinemathek, a museum for film and television. He even plugged his own film Cave of Forgotten Dreams (2010) on the Harald Schmidt Show.

Herzog's persona and public image are almost impossible to separate from his work. There is probably no other director in the world who has been in the business longer (since 1962), made as many films (over 60), worked in as many countries and with as many production systems (Germany/USA, TV/film), and who has managed to maintain so much control over his projects as Werner Herzog. If someone was ever to represent the concept of auteur filmmaker (a director who is so involved in his productions that his personality comes through in almost every aspect), then it is this man. As such, his works are all thematically and aesthetically powerfully connected with each other as well as with Herzog's personality and life. In fact, Moritz Holfelder, a journalist at Bayerischer Rundfunk, a TV and radio broadcaster, made this the main theme of his biography of Herzog, which he was able to present on the occasion of the director's 70th birthday – albeit without permission from Herzog himself.

The main strength of the biography is that Holfelder chose not to keep quiet about the background story. Instead, he documented it, including the fact that Herzog's half-brother and manager, Lucki Stipetic, tried to wield a controlling hand over Werner Herzog and to alienate potential interviewees for the project. Interesting material ultimately came from the people who Holfelder was able to speak with, in particular his former classmate and friend Wolfgang von Ungern-Sternberg and director Alexander Kluge, who helped to demystify the confusion of the past. For example, Kluge told Holfelder that he had loaned Herzog the camera he used in his first films and has still never gotten it back. Herzog, for his part, has claimed on multiple occasions that he stole his first camera.

Herzog's time in the USA is not covered at all. Anyone who is really interested in learning more about Herzog's films can reference a number of further publications that have come out since the beginning of the 2000s.

Film series on Goethe on Demand

On 5 September 2022, Werner Herzog celebrated his 80th birthday. His work has had a decisive influence on New German Cinema and makes him an important representative of international auteur filmmaking. To mark the occasion, we take a look at five films from his rich oeuvre.

Chris Wahl holds a doctorate in film studies from Konrad Wolf HFF, a university in Potsdam. His professional focus is (German) film history, the aesthetics of film and film as cultural heritage.