“I am currently researching the intersection between queerness, undocumented migrants, and feminism in the United States.” 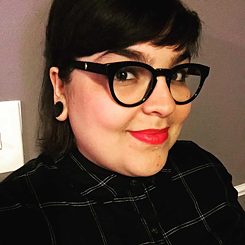 © Liliana Macias As an advisor for Queer as German Folk: 50 years of Transatlantic Rainbow Friendship
Liliana Macias was tasked with helping develop content and build  local partnerships. Informed by her scholarly work on queer latinx  performance, she was tasked with the creation of the Chicago component of the exhibit. The Chicago component highlights a variety of forgotten and key queer  sites and spaces in the city of Chicago.

Liliana Macias is a program coordinator for the Chicago History Museum. She  is also an adjunct lecturer for the Women’s and Gender Studies and Sociology  department at Northeastern Illinois University. She has had the privilege of  presenting her scholarly work on Chicago’s Queer Latinx communities in a  variety of conferences. Liliana migrated to the United States from Mexico when  she was 6 years old and grew up in the lower west side of Chicago. She is  currently working on exploring the intersections between queerness, being  undocumented, and feminism in the United States.

Back to the exhibition in Chicago