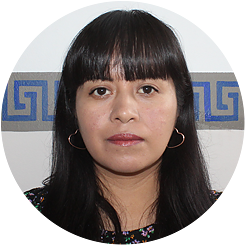 Thalia Fernández Bustamante is an artist, activist and human rights defender from the indigenous Otomí community of San Francisco Xochicuatla in Lerma, Mexico. Her work is committed to creating public awareness for her community’s resistance towards the state government’s plan to build a highway through the forest.

As the Communications Coordinator of the Otomi Ñatho Xochicuatla Supreme Council A.C., she leads the documentation of the whole conflict through photography, video and other forms of art. Through these artistic processes, Thalia shows the participation of women and children in defense of their territory, highlighting the experiences through emotions and the ancestral knowledge of the community. Moreover, she is helping her community to build a Castle of Memory (Castillo de la Memoria), a space to undertake new forms of resistance and to help other communities who require support to document their own efforts.

Fernández Bustamante received a degree in Educational Science at the Colegio Mexiquense Universitario located in Toluca. She attended the J'Tatik Samuel Ruiz National School of Peace in Mexico City, which is affiliated to SERAPAZ, an independent Mexican organization, dedicated to peace consulting and positive conflict transformation. She also received a diploma in Cultural Processes Management for the Construction of Peace and Memory, through the Spanish Cultural Center and the Claustro de Sor Juana University in Mexico City. Thalia also trained in ethnographic photography at the National School of Anthropology and History, as well as a theoretical and practical courses on documentary script and audiovisual editing at the Autonomous University of the State of Mexico.

Her work focuses primarily on the subject land and territory defense. For over 12 years, her own community has faced conflict over the defense of the forest and her project offers a proposal to solve said conflict. Fernández Bustamante documents the whole conflict through photography and video. She has collaborated with the Do Xente Audiovisual Collective, to make several documentaries, such as Ga Mi Do Xente (The Heart of the Mountains), which deals with women's participation, and Somos el Presente (We are the Present), a film about the children from Xochicuautla. The films have been presented in different communities, cultural spaces and universities throughout the country.

Fernández Bustamante is convinced that the memory of her ancestors is reflected in the present struggles. A living archive on the memory of the struggle in Xochicuautla reconstructs the meaning and significance of the process and transformation of the conflict. Through art and culture an emotional sense of the memory of resistance and defense of the forest are evoked.