Mohammad Al Attar’s “Aleppo. A Portrait of Absence”
What Does Theater Mean for the Revolution? 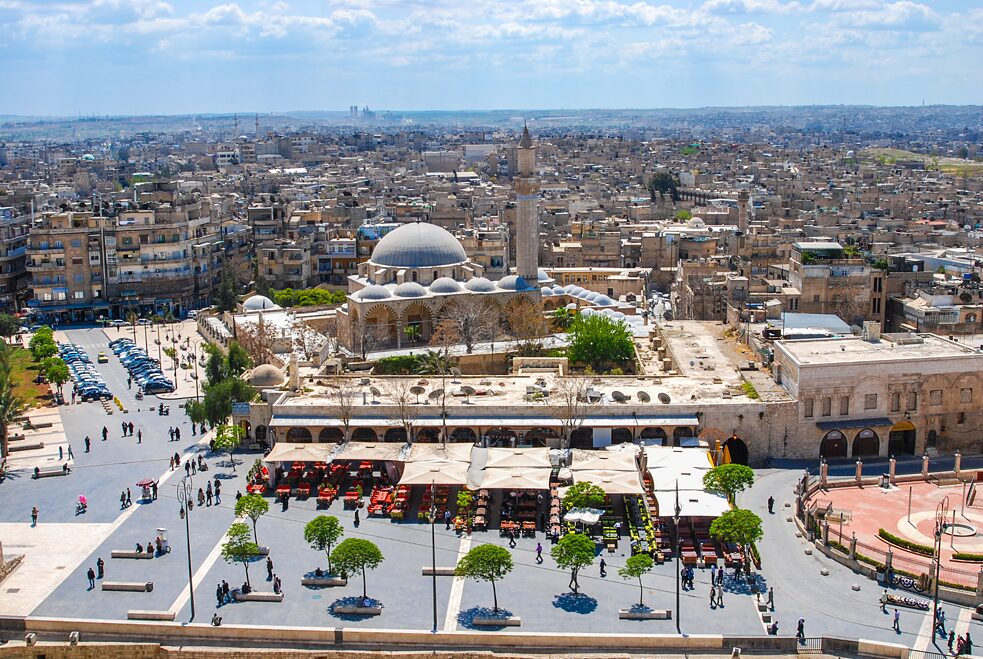 What form of theater can reflect changed realities? The journalist Katja Petrowskaja and the artist and playwright Mohammad Al Attar discuss Noam Chomsky and the international left, migration and military conflicts as lived experience, and theater as a political tool.

You have conducted a number of long interviews with important Marxist intellectuals.

I did these interviews for myself, when I wanted to understand, and when I got the chance. 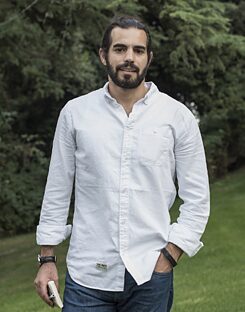 Mohammad Al Attar | © Gorgia Fanelli There was a reason: the position of the international Left, and more specifically the communists, was shameful towards Syria. Many of them took the side of the Assad regime, because they still approach the world today through the old Cold War narrative. They have been approaching a current, complex phenomena with very outdated tools of analysis.

It was the same with Ukraine!

Exactly! Therefore, I think we [Syrians] understand the struggle in Ukraine better than other people do, also the frustration, because the narrative around our movement was manipulated too. For many it was only a foreign conspiracy, led by the Americans in order to destabilize the region. Noam Chomsky struggled in the Middle East and I wanted him to speak about Syria. He is a brilliant brain, and it is important for me to hear how he judges the situation. He was humble enough; he didn’t have any advice. I wish that many of the people in positions of deciding on the fate of others, would be so humble. Sometimes I don’t agree with him, because he still sees American foreign policy as the main evil acting everywhere. For me, Chomsky’s brilliant analyses sometimes were overshadowed by this over-obsession.

For how long have you been living in Germany and how did you get here?

It was the Heinrich Böll Stiftung, the Green Political Foundation in Germany, that brought me here. I had no papers and no residency in Lebanon. They facilitated my travel mainly with the German Embassy in Beirut, where I lived at that time. I got a travel asylum document afterwards, as a refugee.

Is this a source of your engagement?

It is not an engagement; I am living this experience. For example, I am now working on a piece adapting Iphigenia with a group of young women refugees. All of them are nonprofessional actresses, all of them arrived in Berlin within the last two years. The complicated process of settling into a new place is exactly that which I’m going through now, and I’m trying to understand all the different layers of this experience.

You wrote many analytical articles on the situation during the Syrian revolution and later, do you consider yourself to be a journalist?

No, I don’t consider myself to be a journalist. Before the revolution I wrote reviews mainly about theater and cinema, only when felt like it, not regularly. During the Syrian revolution I felt an urgency to speak out. I am a writer. I write for theater, and theater is my main tool. Theater is the place where I can reflect on things in a deeper way. But at that time I felt, if I have the advantage of reaching some platforms to publish things then I should use it. People outside Syria knew very little about us, and if they did know things, these were more likely to be based on stereotypes.

You mentioned Chekhov and Brecht under your most beloved playwrights once. Now you are moving over completely, to documentary theater. Can you explain this move?

It’s simple. In the early days of the revolution, I was, like many Syrians, in shock; we could not figure out how all that was happening around us had happened. Anyone growing up living under such a brutal totalitarian regime, never ever would have imagined this explosion happening; all these grassroots movements calling for freedom, even if they’d spent their whole life dreaming about it. Just to see how it came about from nowhere, from outside any sort of political structure was a huge shock. We were paralyzed, but also very happy. In those early days of the revolution, I was questioning the meaning of theater. Is it the right time for theater or are there other priorities for reflecting on the moment? I was also looking for a more direct political involvement. I was preoccupied by this idea.

This questioning during the Maidan uprising was very similar, also at the beginning of the warin Ukraine. It was a huge shift in the biographies.

For me as well. I Actually, it was a coincidence that I got a commission to make the piece Look at the street … this is what hope looks like, and I realized in the process of doing that, that I should focus on theater. In such an upheaval, during this big, violent transformation, it meant a lot for me not to withdraw. It was the most serious test for me and my relationship to my tools. I had always believed in theater as a strong political tool, and that it can engage powerfully in social and political debates. That’s why, after a short period of hesitation at the beginning of the revolution and after writing the first piece, I turned even more to making theater, trying to reflect everything using it.

What type of theater?

What form of theater can reflect a changing reality? I am not an outsider. I am somebody who is physically, mentally, and emotionally affected and involved. And I am not alone, I work with partners. With each turn of the ongoing Syrian tragedy we were trying to find a form to fit our questions relating to the time. We tried to reflect on something we thought of as now the most sensitive and urgent in the upheaval, but it is a constant change in form, because there is a constant change in the questions, in the convictions, in the validity of the word and its functions.

to focus on the recent history of the whole region

In the first few attempts (like Look at the street … this is what hope looks like and Online), a major part of our interest was to explore how important communication through social media became for young people during the first days of the uprisings in the Arab world. We also wanted to examine the esthetics of this emerging language which came about with the increased presence of social media. In Could you please look at the camera the first draft was a pure documentary theater piece based on detention testimonies. Later I combined the document with fiction, to reflect on other questions, like how people cope with the consequences of detention when they are released from prison, and questions about the upper-middle class in Damascus and its position in relation to the revolution.

This final version was staged in many places. And after being focused on a direct narrative on the Syrian situation, I felt also that it was important to focus on the recent history of the whole region, in an attempt to understand more maybe why we are facing such a situation today. And for that we made the next piece, Intimacy, which is based on the real profile of a Sudanese actor who had been forced to flee his home in the early 1990s. In Intimacy, through the private story of this one actor, we tried to narrate the political and social transformation of the whole region, from the 1980s to the present moment.

Who do you see as your potential spectators? Are you writing for Syrian or for European people?

You always have a potential spectator, or people in mind, whom you want to tell. You are also worried about how they’ll receive the work. I am writing about things, things that are part of ongoing debates among Syrians, or may form part of future debates. So naturally I always want to show it to Syrians first. But in reality we have less and less chance to stage theater for Syrians or for anyone in the region. It is sad. But as a professional I had to think about audiences here in Europe and Berlin. And based on that, I started to discover that there are strong points to creating a debate with a new audience: it shapes new perspectives, and it helps me to look at things differently.

Are you sometimes arrogant towards people who don’t share your Syrian experience, an experience of a troubled world?

No, I do hope not. Sometimes I find myself becoming less patient, explaining basic things, again and again, day after day, answering naive questions. Sometimes I get very frustrated. I know frustration doesn’t lead anywhere. But I am a human being, not a prophet, I have a right to be irritated about the laziness of other people. Sometimes I feel fed up with superficiality or comfort analyses about us, it hurts. But did I care enough personally during the massacre in Ruanda? I remind myself about that in order to avoid falling into the trap of negative frustration.

For Aleppo. A Portrait of Absence, the artist Mohammad Al Attar asked residents of the Syrian city about their favorite places. In cooperation with the director Omar Abusaada and the stage designer Bissane Al Charif, this has resulted in a series of one-on-one performances which the Montreal audience will have the chance to view as part of the Festival TransAmeriques from June …