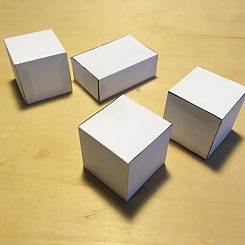 The printed cut-out sheets serve as templates for making cubes, cuboids and pyramids out of ordinary A4 paper. Participants learn about basic geometrical forms as they make their own “building blocks” out of the simple material of paper. Once the building blocks have been made, small groups can work together to create shapes, sculptures and architectural models.

Background
From the outset the Bauhaus propagated a reduced, unornamented style of design orientated on basic geometric forms. While each teacher pursued their own concept, priority was always given to function, production, suitability, and visibility of construction. These aspects apply at all scales, from large architectural ensembles through individual buildings, to functional furniture, user-friendly utensils and unremarkable everyday objects. The buildings designed by Georg Muche, Walter Gropius and Ludwig Mies van der Rohe resemble cubes.

When he founded the Bauhaus, Walter Gropius sought to bring together the arts and crafts. The goal was to train a new type of artist in the field of design and architecture to create products suitable for industrial mass production.

The Swiss painter and art teacher Johannes Itten designed the preliminary course at the Bauhaus in Weimar. Itten saw individual sensibility, subjective recognition and objective comprehension as the basis of creative design. His teaching as head of the preliminary course (1919–23) concentrated on studies of nature and materials, along with colour and form theory; analyses of the Old Masters and life drawing were also included. When Itten left the Bauhaus in 1923, László Moholy-Nagy took over the preliminary course, which he ran together with Josef Albers. Moholy-Nagy shifted the focus from artistic to technical questions, but retained Itten’s teaching methods, encouraging students to conduct their own material exercises. Rather than promoting pure individuality, he sought to systematically introduce his students – in a synthesis of the senses – to basic technical principles such as statics, dynamics and equilibrium. In 1928 Josef Albers became official head of the preliminary course. He encouraged students to investigate the properties of materials like metal, wood and paper by using simple tools and also placed special weight on the effect and representation of light, shade and perspective.

Module 1 takes up the idea of examining a material, as they did in the preliminary course. Students explore the properties of paper, studying its characteristics and constructive possibilities. The basic geometric forms are also introduced.
Variant Mobilé
More ambitious students can use the geometrical forms to make a mobile. First a mobile frame is made using wooden rods and thread. Then the forms are glued to the thread. Now examine the mobile from different perspectives. How do the forms relate to one another? How do they change when the perspective changes? How do light and shadow affect the shapes? And how do the shadows on the wall change when the light source moves?