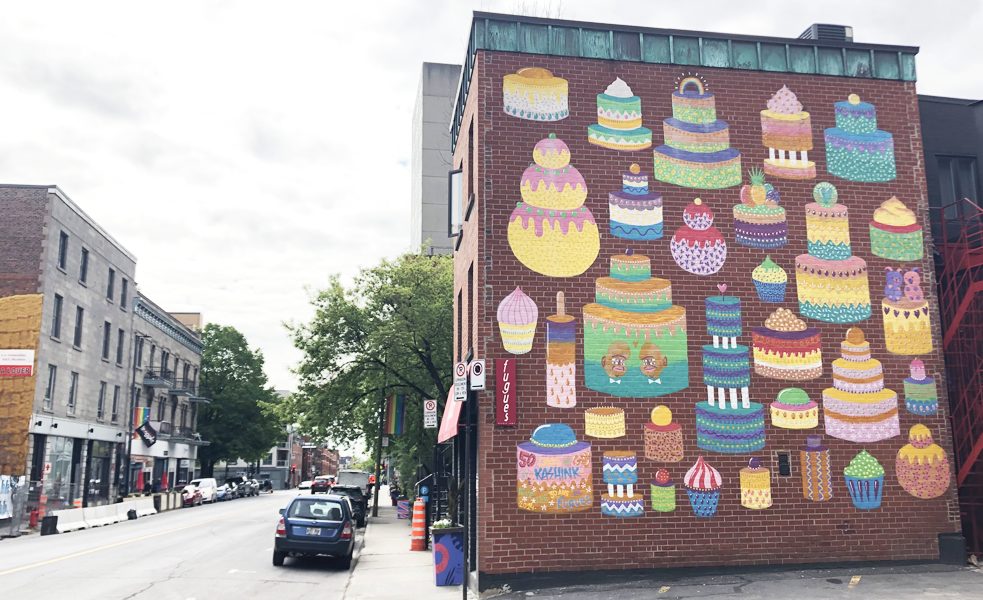 Since 2014, locals and tourists can marvel at the mural 50 Cakes of Gay located in the heart of Montreal’s Gay Village. The mural was created by street artist Kashink, who has painted over 300 same-sex marriage cakes in nine different countries during her project 50 cCakes of Gay which started in 2012. A series of protests against same-sex marriage in Paris in 2012 led her to paint the first work of her project. The colorful murals are meant to spread a positive image about same-sex marriage. Idealistic motives are the driving force of Kashink’s paintings which is why, in this project, she works for free. Montreal’s mural contains 30 cakes in honor of the 30th anniversary of the free gay magazine Fugues. The wall on which the mural is painted belongs to the building in which Fugues has its office.

However, 50 Cakes of Gay is not Kashink’s only activist project. The artist grew up in the notorious suburbs of Paris and got to know graffiti early in her life. She began painting on big walls as early as 2006. In the beginning, it was all about the aesthetics of street art, but after some time, she began to use her murals for political statements. She says her activism aims at celebrating human diversity. In the course of the campaign My Body My Rights, she worked with Amnesty International and questioned the gender normative representation of women and their bodies. She also does this with her signature look: She has been wearing two lines above her lip as a mustache for several years now. Thus, she criticizes female beauty standards, especially female make-up traditions.

I wanted to take this strong symbol – the wedding cake – to share my opinion on equal rights and gay marriage. (…) It is legal in France now, after all these protests, but it is still an issue in many countries.