Through the years, San Francisco has been a golden gateway for artists, thinkers, and writers. Next to Los Angeles, New York and Chicago, it is one of the top US cities for murals, with over 1,000 works that have turned alleys and building façades into open-air galleries.

As many murals across the city delve into the economic, cultural, and societal challenges and changes, many others are for fun, for whimsy, and for the admiration of someone (or something) special to the artist. One of the three recent works by anonymous East Coast artist Believe in People (BiP) is "No Ceilings," a striking new vision for "Rosie the Riveter," an homage to all women overcoming obstacles, and an interpretation of "Black Girl Magic".

In the bustling mid-Market area, Argentinian Cobre (Andres Iglesias) honored the late Robin Williams with a mural that captured his twinkling eyes that conveyed both the feelings of happiness and of sadness, reflecting the inner turmoil that contributed to the famed actor's suicide.

At Port Pier 92, the extraordinary 187-foot tall "Bayview Rise" by Haddad | Drugan is an illuminated mural with abstract and intermingling geometric patterns that metaphorically symbolize the Bayview community's transformation through the years, both economically and ecologically. Utilizing unusual media of recycled paper glued to the building with wheatpaste, New York-based artist Swoon, made a tribute to her grandmother, who was nicknamed the "Ice Queen". 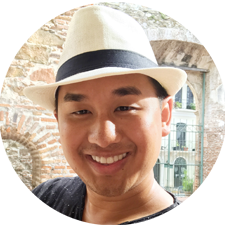