Mathilde Weh
The Aesthetics of Signals

Curator, musician and artist Mathilde Weh on the links between music and art and the exhibition “Techno Worlds” she co-developed for the Goethe-Institut.

Were you yourself active in the techno scene at the end of the 80s and early 90s?

Mathilde Weh: A bit. I made my own music. I had a band at the time. It wasn’t techno though, it was more drum’n’bass music. I was very interested in techno, but I wasn’t a permanent club-goer yet. When I heard the band Front 242 for the first time, I thought the music was great. It was hard and you could dance to it very well. But I was never interested in commercial techno, but rather in subcultural techno. Detroit techno was of course also part of that, back then at Tresor. That was my first contact with the music. I was often in Berlin at the time, even though I lived in Munich.

How did a connection between art and techno develop for you?

I studied art and organized exhibitions before I made music. It was always important to me to also include art - or let’s say performance art - in live performances. It was clear to me that there was no strict separation there, but that art and music were always very connected. 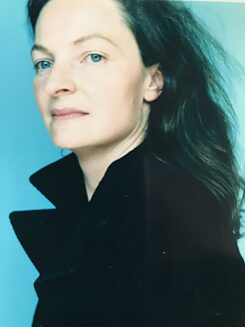 We didn’t want to linger in nostalgia

Can you name a few examples?

The artist Daniel Pflumm, who is also featured in our exhibition, was important for me. And later Carsten Nicolai and Wolfgang Tillmans with his photos. At the start, it was more the music that was central – but that’s also performed in a particular way. You really can’t separate it. It’s not about hanging works of art in clubs. You can do that, of course, but that’s not what I find interesting. I think it’s exciting to combine the outfit, the artistic performance with the music.


What influence did music itself have on art?

I definitely think that the special thing about techno – this minimalism, this hardness and these hard cuts – has also influenced the art of many artists who have engaged with techno. Ryoji Ikeda, for example. He’s a music producer and artist, just like Carsten Nicolai. You can see it in how they edit their videos or create their art. These aesthetic principles are similarly there in the work of the artist group M+M, which is also included in the exhibition. They installed a tube in the club. You didn’t see at first that it was an artwork. Then they played the videos there. It was about ultrasound recordings. The sequences are cut as hard as techno music.

How did you experience this kind of art yourself?

I experienced it in such a way that it was a completely new way of thinking about art – that it wasn’t presented in a museum, but was rather simply integrated. Space itself was made audible and tangible in a fascinating way with techno. This electronically-produced music followed entirely different structures in its composition than pop or rock music. But the aesthetics of signals and superimpositions produced by technical means can also be transferred well to visual planes, like Ryoji Ikeda has done, for example. The acoustic experiences produced by him as a music producer have the strongest effect in a club room kept as dark as possible and interrupted only by occasional lighting effects. The orientation is lost through this and the room is almost stripped of reality.

How did you translate that into the Techno Worlds exhibition?

It was very important to me not to make a purely historical exhibition that only concerns Germany, but rather it should be an exhibition that includes the global techno phenomenon. Of course, it's not easy to decide what to show and what not to. We definitely didn't want to linger in nostalgia, but instead to show a forward-looking vision of this way of life. It's also about the fact that the versatility and unwieldiness of techno, with all its adaptations, is pretty unique in worldwide music history.

Take us through the exhibition: What can you see there?

We show artistic positions or artistic interpretations with the theme of techno from different eras, not just from the 90s, but up until today. On the one hand, there are people from earlier, like Daniel Pflumm or Chicks on Speed. There are some who were very well known back in the 90s or who dealt with the subject a lot. But there are also very young artists, such as Dominique White. She’s a young artist who hadn’t even gone to raves back then because she was simply too young for that. We also have works like those by The Otolith Group. They’re two artists from London who operate very theoretically, but their  work is all about the original techno in Detroit. Then there’s DeForrest Browntogether with AbuQuadim Haqq. They’ve been engaged with the African-American origins of techno. They deal with the entire set of themes of colonialism, globalization processes, and more in their work. Those are very political works. Of course, we also have other positions that deal with the theme of “clubbing” and the club. Some of these are also very political works that address the club, but also rave culture as a community and a place for political action and resistance.

What do you still see of techno in art today?

For our catalog I asked Jörg Heiser to write an article. He is an author who released the book Doppelleben - Kunst und Popmusik (Double Lives in Art and Pop Music). In it, he quotes Wolfgang Tillmans. I find the quote quite apt: “A good club is so stimulating visually that so-called fine art isn’t really needed there. The greatest works of art are the music pieces themselves, which are presented there with an insane presence. This blend of music, light, movement, bodies, skin, sweat and clothing is perfectly enough. The atmosphere in a club is what the best art should be: it’s totally open and doesn’t tell you what you should think. At the same time, it is not arbitrary, but rather very special and specific. (...) I think a productive effect in the connection between art and nightlife results rather not in the fact that artworks hang in clubs, but in the fact that the open-ended aspect of music and nightlife can be fruitful for all kinds of art forms.” I found that very interesting. What is art, then? There are also photos that Tobias Zielony, for example, or also Wolfgang Tillmans have taken themselves. These are simply photos from clubs of the events. I don’t think that a real techno art exists in and of itself as a visual art form. But if it does, then it's always in connection with the music.

Mathilde Weh is a curator, musician and artist, and serves as a consultant in the visual arts department of the Goethe-Institut headquarters in Munich. She advises Goethe-Institut art projects abroad and is curator of the touring exhibition Geniale Dilletanten- Subkultur der 1980er-Jahre in Deutschland, for which she published the exhibition catalogue under the same title together with Leonhard Emmerling (Hatje Cantz). A former radio editor, she engages intensively with the topics of subcultures, art and music and takes part in events and discussions organised by institutions and universities, including the Akademie der Künste in Berlin, Germany. Mathilde Weh initiated the project TECHNO WORLDS

This playlist is the part of the “Top Ten” list of favorite techno tracks submitted by Mathilde Weh which is available on Spotify. Unfortunately, some tracks had to be omitted due to licensing reasons. For the full list please write to the editors.