In 1989, Mark Ernestus, then an art student and bar owner (Kumpelnest 3000), founded the record store Hard Wax in Berlin’s Kreuzberg district, which quickly became a fixture of the Berlin techno scene.

Was there some kind of initial spark for you personally, as far as techno is concerned?

Mark Ernestus: One of those moments comes to mind, but it was with house music. It was in 1986. You’d have heard or read about house, but there were no good resources to get information about it at the time. Compilations that were available domestically were often mixed bags. In Germany in the 80s the music magazine Spex was maybe the most relevant source of information for new music, but the arrival of house and techno brought a paradigm shift that the entire music press struggled to cope with. Back then, my friends and I hung out a lot at Oranienbar on Oranienstrasse. They were always playing mixtapes there, including some early house stuff. I remember a moment when we were standing outside, and the music coming from inside playing loud. It was a mix of Chicago Trax stuff, with Mystery Of Love by Fingers Inc. and Free Yourself by Virgo. I thought: “Wow, this is great!”. That moment burned into my memory. Sometimes you just feel: “There's more where this came from.”

classics in the sale bin

How did all this lead to you opening your record store Hard Wax?

On May 1, 1987 I had opened a bar called the “Kumpelnest”. It did really well right from the first night. When you worked the bar, you’d always need a lot of music. You’d make two mixtapes for the shift. You play them twice that night and you already need something new for the next shift. That was the first time in my life that I had money to buy records and not have to turn every dime. Soon I rarely worked shifts myself anymore, but I went into digging for music all the more. There’s this old rule of thumb concerning bars that says after two years, you’re through with it. For me, that’s almost exactly what happened. It was a very intense time, and I had to do something else. But I couldn't just sit at home and not think about the bar. I had taken on a new challenge and a new project. I had the very naive and cliché dream of being in a record store, surrounded by good music all day long, sharing it with like-minded people and to sit at the source, so to speak, rather than being dependent on the bottleneck of the very few stores existing at the time that sold import records. It was all about house initially – there was no talk of techno back then, really. There was the Detroit Techno compilation on 10 Records, but that felt like more of a local sub-genre of house at first. There were no record stores dedicated to it. The odd copy that did make it into a shop may have ended up there more by mistake than anything else. There are several anecdotes of people finding absolute classics in the sale bin because no one realized what it was.

How did you stock the store with records?

Most of it was ordered from a fax list from an importer or distributor, based on its 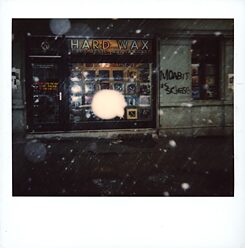 Hard Wax by night and snow | © Mark Ernestus name or label. There was of course no internet, so to hear the music, the importers would play it over the phone. We did the same with our early mail order customers. When we opened, we weren’t a techno store at first, but the sign on the window said “Hard Wax - Black Music  - Buy & Sell”. We had a lot of used records, a lot of rare soul and funk records and a small hip-hop section. As well as reggae and dub, and a pretty small house section – the few things that were available to us. NuGroove, for example, was one of those labels that everybody wanted in the very early days. The importer got maybe two copies from the U.S. and soon learned that we were keen on exactly that stuff. The importer was happy to get rid of them right away. And we were super happy to have them. It went on like that for a while.

stay connected to the music

Who helped you with that?

Very importantly Boris Dolinski, now Berghain resident DJ Boris. I had briefly met him at Oranienbar at the end of 1985. Some night it was Goodbye party for Boris. He was moving to New York - and he was just gone for good. Then in the spring of 1990, he suddenly walked into the store, I think with Reinhardt from Kumpelnest. Only then Boris told me that the reason why he had moved to New York was that on a previous visit he had realized the Paradise Garage was his thing, and that he wanted to live there. That was his life during those years: going to the clubs on the weekends and during the week working and checking record shops. That meant he had really comprehensive knowledge about the whole scene. He didn’t just know the music, but also the whole context. So it was a no-brainer that he had to start working with us. I think he just stayed that day. That was a huge stroke of luck for us. And for him too, of course, because it meant he could stay connected to the music back in Berlin, as well as apply his knowledge.

Can you be a bit more specific about that: What exactly was this special knowledge?

He knew practically every label and every record, so it was clear immediately that

Mark Ernestus | © Dave Walker, CC BY 2.0 his knowledge and also his confident, colloquial English could help to establish contacts to import directly from the US. I had only my somewhat clumsy highschool English and a minute-long phone call to the USA cost 3.96 marks. You wouldn’t just dial a few numbers to see if someone on the other side would want to talk to a small record store in Germany. It quickly become a four-digit monthly phone bill anyway. But with Boris it went much better than if I had just tried it alone. During the day we were always in the store, and at night we’d check interesting stuff came in that day for phone or fax numbers and just tried to contact the labels or distributors.

The UPS guy comes at four

When did you realize that Hard Wax had become a hotspot for house/techno?

It quickly became clear that between the different genres we carried, house was the most interesting for us. Firstly because it was happening in real time, secondly because no other store in Berlin cared about it, and thirdly because it was predominantly small US labels who often didn’t have proper distribution, which means direct import was a quantum leap forward in terms of meeting the demand.  A lot of things came together. We opened at the end of 1989 and had prepared for about half a year prior to that. Of course, nobody imagined that the fall of the Wall would have happened in the way it did. The people from the East who came into the store and then to the clubs were on average five years younger than those from the West. This was a generation that listened very attentively to Monika Dietl’s radio show. The people in the West were a bit party-proven already. They all studied something or other, but were mainly nocturnal. So there were different dynamics that people brought with them. And of course, the fall of the Wall made these new locations available...

...which were also all close to Kreuzberg.

Exactly. All these first clubs like Tresor, Planet or Walfisch were sitting along the former death strip like pearls on a string. A lot of the crowd on the west side lived in Kreuzberg, and that’s where the Hard Wax store was – and still is.

There’s this legend that there’s a hierarchy in all record stores and that people keep the best records for themselves. What was that like with you guys?

I’ve always tried to avoid that, or at least keep it to a minimum. But it’s partly true, of course. We bought from two importers, always on Tuesdays and Fridays. So that meant four import deliveries with mostly brand-new stuff per week. We hadn’t heard most of it ourselves yet, or only briefly on the phone. So those were the important days for the people who were really fanatical about new house or techno records. The first diehards were DJ Rok, Tanith and Jonzon, who had already been DJing before Hard Wax existed and from ’91 onwards I’d say had a defining musical influence on Tresor. They all knew: The UPS guy comes at four. But they were nevertheless always there at noon when we opened, because you never know – he might just come earlier. Of course, when there’s only one copy, you want to be in the best position to deserve it. I’ve always tried not to give anyone special treatment just because he or she has some kind of status. But of course, at some point, you earn the right by showing the commitment. Even if it was frustrating for people standing in the second row or who only got off work at 5. DJ Rok in particular was famously assertive. He later worked in the store for a few important years.

Mark Ernestus is the founder of the legendary record store Hard Wax, which laid the foundation for Berlin's electronic club music scene in 1989. He played a key role in establishing the Berlin-Detroit axis and, with Moritz von Oswald, began making music together under the names Basic Channel and Maurizio. They are considered the inventors of dub techno. Under the name Rhythm & Sound, the duo continued to research links between techno and reggae. Ernestus is also the founder of Dubplates & Mastering, a studio dedicated to vinyl mastering and editing.