The pianist of Japanese origin Kimihiro Yasaka was invited to give a recital at the Goethe Institute in December 2019. This was an opportunity to showcase the work of composer Yukiko Watanabe, one of the pieces on the programme having been written specifically for the pianist. The other works played showed the musician's enthusiasm for contemporary music and his desire to promote Japanese culture.

The recital marked the end of a creation residency that Yukiko Watanabe enjoyed as part of a cooperation agreement between the Conseil des arts et des lettres du Québec, the Goethe-Institut Montréal, Le Vivier - Carrefour des musiques nouvelles (Montréal) and Hellerau - European Centre for the Arts (Dresden). The Cologne-based composer is working on a dense catalogue of works for solo and orchestra, in which new practices and interdisciplinarity play an important role.​

Starting without a presentation, the programme opened with her piece Secret question (2019), for voices in different languages, performed by the members of the Joker choir (Sarah Albu, Magali Babin, Damaris Baker, Michel F. Côté, Jean Derome, Joane Hétu, Kathy Kennedy, Cléo Palacio-Quintin and Vergil Sharkya'). Scattered throughout the space and, for a good part of the public, hidden by the book displays that form the decor of the Institute, the vocalists freely projected various interjections ("Where?", "What?", "Where?") to which were also added the names of cities ("Berlin!", "Toronto!") or other apparently meaningless words. The whole thing resembled an improvised Dadaist poem and could help to clear the listener's mind and put them into a listening position.

Taking his place at the piano, Kimihiro Yasaka then launched without warning into a fairly rapid reading of the 10th part of Natürliche Dauern 1-24 [Natural Duration 1-24], a piece that forms the third hour of Klang, Die 24 Stunden des Tages [Sound, the 24 Hours of the Day] (2004-2007), Karlheinz Stockhausen's last, unfortunately unfinished work. We would be delighted, next time, to see the pianist offer in recital the 21 parts that the German composer was able to complete before leaving us. 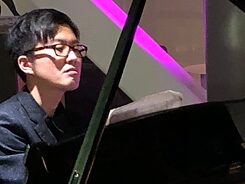 Kimihiro Yasaka | © Meta Kluck
The pianist completed a master's degree in performance at McGill University's Schulich School of Music, where his talent has earned him a number of awards and scholarships for excellence, but he does not seem inclined to display his virtuosity to show-off; on the contrary, he favours the construction of atmospheres through sensitive, poetic playing. This was particularly evident in the block of Finnish composer Juha T. Koskinen's pieces (Kokuugen [2017] and Myoken [2019]) with Yoshinao Nakada's On a Rainy Night (1948). These "Japanese-inspired" pieces are very close to the impressionist style, and it is especially Debussy who comes to mind when listening to them.

The next block featured three pieces by young Japanese composers and was a tribute to the visual artist Carole Simard-Laflamme, who was present to receive him and who addressed a few moving words to the audience. There was a clear kinship in these works composed by artists under the age of 30: Natsuki Niwa (1991), Suiha Yoshida (1994) and Yuna Kurachi (1995). The music was particularly well chosen, moreover, to salute the work of an artist who sculpts fabrics and weaves sound objects. The works exploited space in a lively, fragmented interplay of contrasting dynamics, and the theme of time, evoked in Yoshida's Falling Layers of Time, brought us back to the Stockhausen heard earlier, with its repetitive aggregates in the high notes. The pianist premiered all three pieces at a recital in Nagoya, Japan, last July. 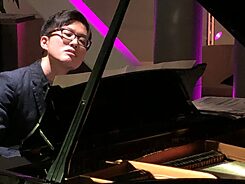 Kimihiro Yasaka | © Meta Kluck Then came a "tribute to Debussy" through a work by Philippe Leroux, Dense...Englouti (2011). The composer himself explained that he was indeed inspired by two excerpts from the first Book of Preludes (1910): La cathédrale engloutie and La danse de Puck. The sequence of sharp, dry attacks seems rather far removed from Debussy's style, which nevertheless ends up slipping out of the work to colour the resonance of the endings of the phrases. This homage was followed by another, this time to Robert Schumann. Opening with a short piece by Canadian composer Chris Paul Harman, this block continued with Reine Liebe (2015), by Hideki Kozakura, which the pianist had given the Canadian premiere in 2017 at a concert at the Vivier. Through a series of harmonious chords that could be borrowed from Schumann, contemporary jolts add a certain tension, but strangely enough, in the diaphanous extensions of the vaporous chords, it is still Debussy who comes to mind, all this to say that he seems to have had a lasting influence on Japanese composers! 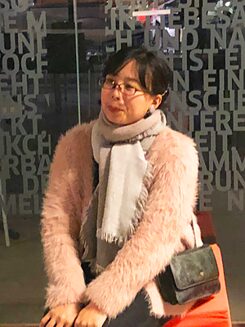 Yukiko Watanabe | © Meta Kluck
Composer Yukiko Watanabe introduced the last work on the programme, composed for the pianist, explaining that having left Japan in 2008 to settle first in Austria and then in Germany, she sometimes feels homesick. Remembering an old, out of tune piano that she happened upon in a school in her hometown of Nagano, the composer wanted to recover the broken sound of the instrument by writing this piece for prepared piano. After placing various objects on the strings of the instrument, the pianist explained that he had never before felt such sensations like from the playing of this piece. Memory and Stain for Living Room with Small Piano takes us back to the room that opened the concert and now gives it the relevance we were looking for at the beginning of the program. The questions thrown out in no particular order, the names of cities, etc., all now make sense, and the piece seems to be only a subjective setting of the "improvised poem" that the choir served us.

In short, a recital with a varied programme, with well-chosen works that constantly refer to each other and offer the listener food for thought. Offered in the intimate space of the Goethe Institute's work areas, and in a relaxed atmosphere, it was a wonderful culmination to the residency enjoyed by composer Yukiko Watanabe.

Réjean Beaucage is interested in avant-garde arts in general and new music in particular. He has directed and hosted radio programs at CIBL-FM for some fifteen years. He is the recipient of an OPUS award from the Conseil québécois de la musique in the category "Media Production of the Year 1996-1997" for the radio program series AnémixinémA/Zone sonore. As a journalist and essayist, he regularly contributes to the cultural magazine Voir and his contributions have been read in La Scena Musicale, Circuit or Improjazz (France), among others. Since 2010, he has been the general director of the immersive digital music festival AKOUSMA and is the author of a history of the Société de musique contemporaine du Québec (Septentrion, 2011) and an essay entitled Musique actuelle - topographie d'un genre (Varia, 2019).