Marion Sparber in Montreal
From Inside to Outside

Originally from Italy, Marion Sparber is a dancer and teacher based in Berlin. From February 10 to 14, 2020, she gave master classes entitled "From Inside to Outside" at Circuit-Est centre chorégraphique, classes in which she focused on floor work. We spoke with her during her stay in Montreal.

From Inside to Outside was a contemporary dance training with emphasis on floor work. The warmup is focused on passing through the whole body and expanding flexibility and strength. In a group, with a partner and alone, one listens to the weight of the body and directs it through space. Marion Sparber uses the principles of Flying Low technique by David Zambrano as well as the release technique mixed with her personal research.

Marion, can you tell us why you became a dancer?

I took a circuitous route to dancing. Actually I wanted to become a musical star since my childhood and dreamed of being on stage, singing, dancing and slipping into different roles. Therefore I sang a lot as a child, even took acting and singing lessons. But when I went to England as an au-pair at the age of nineteen, I tried to take dance classes to give this aspect a little more attention. As time went by, I realized that I enjoy dancing much more than singing and acting. So I tried to dance more and more until I finally decided to become a dancer. I was aware of my old age, but still wanted to try to be accepted into dance training. At the age of twenty I started my first dance training in Munich, and after three years a second training in Spain.

Do you have role models or have certain artists influenced you?

I love to be inspired by certain artists. David Zambrano is one such example - he is one of the most important and amazing teachers and performers I have ever seen. I studied his Flying Low and Passing Through technique very intensively, took workshops with him and admired him on stage. Other artists whose work I admire are RootlessRoot Company and Ultima Vez. What technique or techniques do you teach in your workshops?

My teaching is a colourful mixture of Flying Low, Passing Through, Release technique, Floorwork, Flooracrobatics and sometimes in longer workshops even Physical Theatre.

What is especially exciting for me is the combination of movement, voice and text – so I love experimenting in class with improvisation and reaction games: This allows to train the body in all its facets and possibilities of expression and to use it for communication.

What was your experience like at Circuit-Est in Montréal?

The week at Circuit-Est was a great experience. I was wonderfully welcomed by Francine and her team, well looked after and accommodated in a beautiful apartment.

The energy in the classes was terrific, I had the honour of teaching great dancers and I was especially pleased to exchange views on the scene in Montreal with Caroline Gagnon from the Goethe-Institute and Francine from Circuit-Est. The visit to the Goethe-Institute in Montreal was very interesting. After classes I always tried to get to know a new part of the city and get a better picture of Montreal. I would like to thank the Goethe Institute very much for their support and wish all employees good luck with their projects! 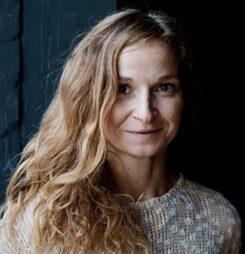 Marion Sparber | © Daniel Nartschick Originally from Italy, Marion Sparber is a professional dancer and teacher based in Berlin. She received her professional dance training at Varium (Barcelona) and Iwanson International School of Contemporary Dance (Munich). As a teacher she has been working in several schools and festivals in Europe and Costa Rica. She has collaborated as a dancer with choreographers and companies such as Francisco Córdova, Stella Zannou and Sonia Rodriguez. She is co-founder of the KpiqA-Collective and CuerpOCOllectivo.

The interview was conducted by Caroline Gagnon, Program Curator for Music, Dance, Theatre and Residencies at the Goethe-Institut Montreal