Green libraries
“We have to react to social change”

More than just a place for bookworms – will the library of the future have vegetable patches on the roof and a repair café in the basement? Tim Schumann works at the Heinrich Böll Library in Berlin’s Pankow district and is co-founder of the “Green Libraries Network”. Here he explains why public libraries have to redefine their role.

Herr Schumann, you recently wrote an essay in which you designed a “concrete utopia” for libraries. You have bees humming away up on the roof garden while bicycles are being repaired in the basement. In the reading rooms there are worms to compost the organic waste and elderly people get together with refugees to take part in joint projects. Is that what is behind the idea of green libraries? 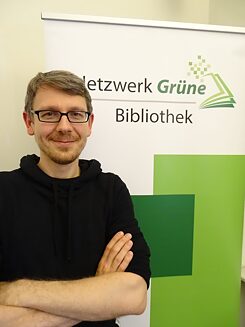 Tim Schumann works at the Heinrich Böll Library in Berlin’s Pankow district and is co-founder of the “Green Libraries Network”. | Photo: © privat I like the general definition that a green library should react to its social environment – and that in combination with the new role, in particular, of public libraries, which are evolving into places where it is not just about books, but also about people and how they interact. Green libraries bring people together on the topics of climate, environmental protection and sustainability – also with the help of various activities. That’s the social aspect. A structural aspect would be installing photovoltaic on the roof, creating bee-friendly gardens in their own green spaces and using fewer resources internally.

Where did the concept of green libraries originally come from?

As far as I know, the idea originated in the USA. In the beginning, in the 1970s, it was initially about how buildings could be made more ecologically sound, but relatively soon the focus moved onto people. For example, it was at that time that information was made available to help people lead a more sustainable life. In the early 2000s, the idea slowly arrived in Germany.

Why are libraries particularly suitable for adopting more sustainable approaches?

Public libraries have increasingly become what is referred to as a “third place”. A place that people can go to and “hang out”, where entire families can spend the afternoon and where schoolchildren can do their homework. That is our unique selling point – to make an impact by making a place available that can be used by everybody free of charge.

And if the “concrete utopia” is to really come alive, people should be able to borrow a drill (from the library of things) or a bicycle (from the workshop) ...

Exactly. Sharing things strengthens the social cohesion of our society, and public libraries are predestined for this. As a library, we have to respond to huge social challenges. There is a lot of potential in establishing green libraries that aspire to a greater social commitment.

Is there such a thing as a showcase green library?

There are many great projects, also on an international level. Osnabrück City Library, for example, is planning to build a “Tiny House” as a “green library for young people”. In Denmark, they are planning to install showers for homeless people. This is where the social aspect really comes into play. Other libraries are “Passive Houses” (energy efficient buildings) or have photovoltaic on their roofs. There is a library in Senegal that collects rainwater and uses it to water its gardens.

Are projects like these what the Green Library Network and the Libraries4Future initiative are all about?

The Green Library Network wants to reinforce the issue of sustainability and encourage libraries in Germany, Austria and Switzerland to become more active in this regard. It is all about exchange and about anchoring sustainability and environmental protection on an institutional level. The network is still in the process of being established and is still consolidating its structures. In addition, during the corona pandemic everything has to be managed online. Nevertheless, our Stammtisch (regular meeting for people with similar interests) was really well received. The Goethe Institutes around the world, for example, were also very well represented. The Libraries4Future act globally, but more on a personal level.

What is discussed at these Stammtisch meetings?

One topic is, for example, the foil-wrapping of books. It’s somewhat of a sacred cow in libraries. You want to protect the books with the foil covers, but of course these are made of plastic. The question quickly arises – do we really need it? As a public library, we often throw away books – in the meantime, we do at least separate the inner part from the foil-wrapped outer part, otherwise it would all be hazardous waste.

The idea of a library that not only lends books, but also sees itself as a social point of contact - does it go down well with everyone?

Users sometimes ask – what’s the point? But as I said, it is also about the new role of libraries, which not only brings books together, but also people, since they too are bearers of knowledge. In this way, the library remains true to its mission of imparting knowledge. We are also accused of veering away from our neutral role. I see it this way - we have to react to social changes and we don’t have time for neutrality. If you ask me, we are not in the middle of a climate crisis, but actually on the verge of a climate collapse. We have to take action now and help people deal with the changes. As libraries, we can do this - and so we should.