is the author of several scientific and popular science articles and has received several prestigious awards and scholarships for her work. Since 2015 she has also been working as an illustrator, cartoonist and creative consultant for various projects. To date, her career has revolved around intercultural education and a dialogue involving nearly forty countries, including Niger, Mexico, Cambodia and Indonesia. Since 2020 she has been working at the Collège Ahuntsic as an educational consultant for Equity, Diversity and Inclusion (EDI). 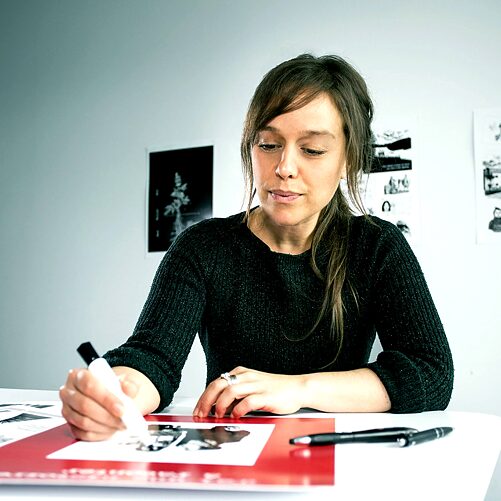 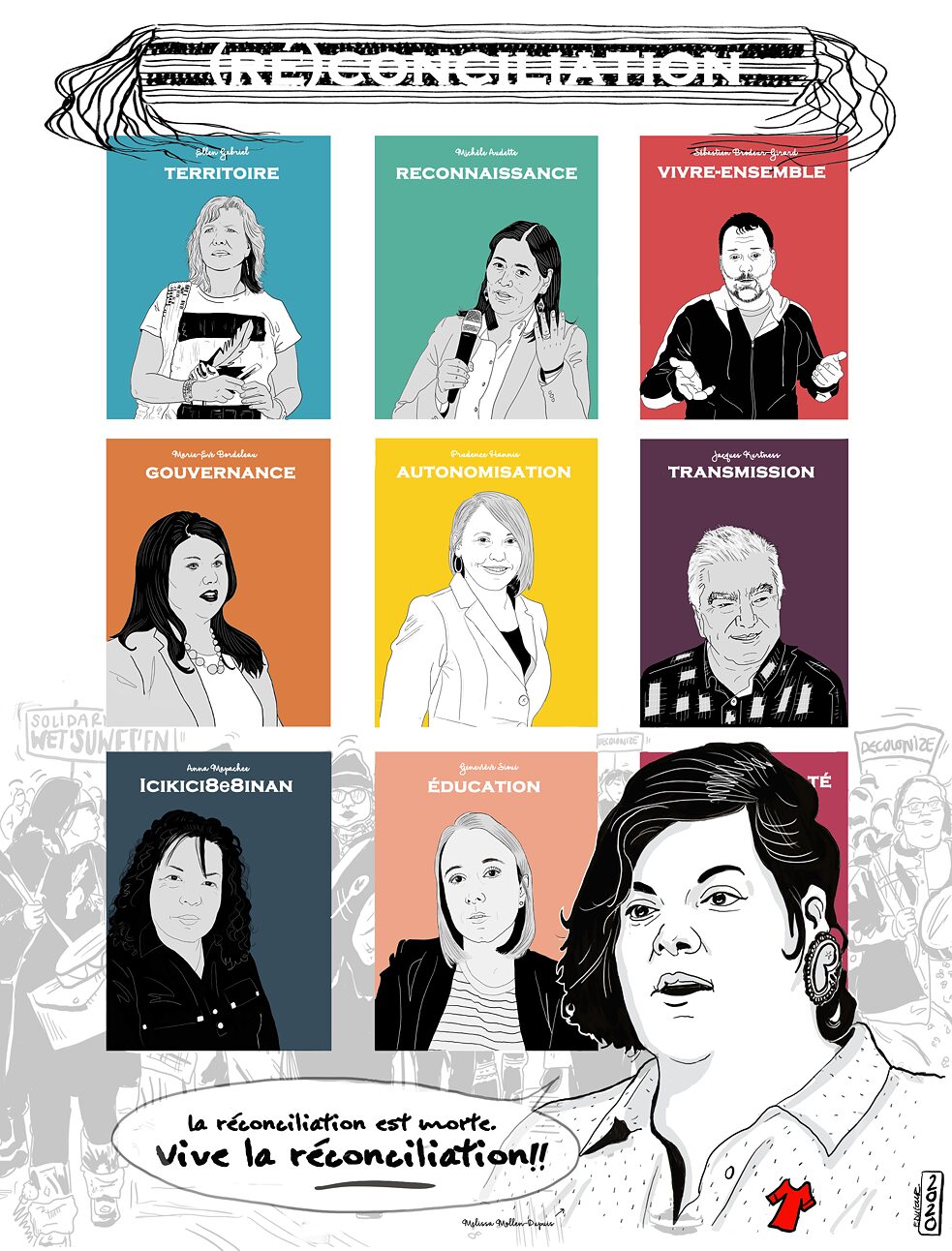 As was demonstrated in particular by the Truth and Reconciliation Commission’s (TRC) final report, which was released in 2015, Canada's relations with the First Nations on the territory has been tainted by an unusual violence throughout its history.

Among the assimilation measures that became the agenda of successive governments in the wake of cultural genocide, we must particularly highlight the strategies of territorial expropriation, the imposition of the Indian Act and of the the First Nations Reserve System, as well as the residential schools system, the killing of Inuit sled dogs, the Sixties Scoop, etc.

Even today, Indigenous peoples must fight against the institutional, systemic and intergenerational effects of these violences in order to initiate the healing process on an individual and collective level.

It is thus understandable that the issue of reconciliation (or (re)conciliation) is a complex project that needs urgently to be carried forward by mechanisms of authentic acknowledgement, but above all, by genuine amendments and reparations that can transcend metaphor.

The contentious events that already marked 2020 have shown once again that the path leading to this goal is not a straight line, but one that sometimes seems to reach a dead end or forces a fall back behind what has already been achieved - especially when it comes to the economic exploitation of the land that is now called Canada.

Despite great disappointments and renewed skepticism, many professionals and activists – among them both Indigenous and non-Indigenous peoples - continue to work, each in their own way, for the recognition of territorial, political, linguistic, cultural and identity related rights of First Nations, Inuit and Métis peoples.

My drawing is intended to pay tribute to this resilience by quoting in a non-exhaustive way some of these key figures, while insisting on the participation, strength and leadership of First Nations women.

As a White privileged, French descendant-settler, Canadian and Quebecer ally, I am deeply convinced that all inhabitants of the territory should feel concerned by questions of coexistence, equality and social justice.

Like Justice Murray Sinclair, TRC commissioner and Anishinaabe senator, justly reminds us, reconciliation is not an Indigenous issue but a Canadian one. Therefore, we are all part of the problem, but also of the solution.

With a dual background in anthropology and the arts, I have been working for nearly ten years in the field of First Nations education. The panel presented here is inspired by my doctoral research-creation Stories to  tell: from Ani Kuni to Kiuna, a reflective, relational and conversational graphic novel that has been evolving since 2016 thanks to the contribution of more than fifty Indigenous and non-Indigenous contributors, including the nine personalities presented here.

Each of the coloured backgrounds on this new story board presents one of the communicating sides of the same central figure –that of the encounter - and opens, like a window, onto the work, involvement and achievements of this local personality.

The headings are based on the contributions and quotations gatheredin the course of my research, but also on the areas of involvement of each of the personalities put forward. These choices, as well as their respective portraits, have of course been endorsed by each of them.

​Ellen Gabriel
Ellen Gabriel (Katsi'tsakwas) is a Kanien'kehá:ka (Mohawk) activist from Kanehsatà:ke and holds a BA in fine arts from Concordia University. She served as a spokesperson for the Kanehsatà:ke community during the 1990 Oka crisis. She has notably served as an art teacher and as president of the Quebec Native Women's Association (QNWA). She is the recipient of several prestigious awards and honours for her activism and involvement. The defense of the traditional territory of Kanehsatà:ke is at the heart of her political action.
​Me Marie-Ève L. Bordeleau
Me Marie-Ève L. Bordeleau is a member of the Cree Nation of Waswanipi in Eeyou Istchee. She holds a Bachelor of Law degree from Laval University and was admitted to the Quebec Bar in 2007. As a major contribution, she co-founded the Mobile Mediation Clinic for First Nation communities and political entities to promote their access to justice.

Recipient of the Sovereign's Medal for Volunteers, Marie-Ève L. Bordeleau has served as the Commissioner for Relations with the First Nation peoples for the City of Montreal since January 2018.
​Anna Mapachee
Anna Mapachee is both Anicinape and Cree woman from Pikogan. During her university studies at the Université de Montréal, she played a crucial role in the development of the Cercle Ok8api (a group promoting the interests of Indigenous students) and in the establishment of a range of services for Indigenous cultural safety (Salon Uatik). Recipient of the Claude Kistabish Award following her bachelor's degree, she continued her commitment by teaching the Anicinape language first at Concordia University and then at the Kiuna Institution. She also works as a lecturer and consultant on various cultural and linguistic projects.
​Michèle Taïna Audette
Michèle Taïna Audette is Innu and Quebecois. She was born in Wabush, Labrador, and grew up between Schefferville, Mani-Utenam and Montreal. She studied visual arts at the Université du Québec (UQAM) and then art education at Concordia University before receiving an honorary doctorate from the Université de Montréal several years later, in August 2018, for her political and social commitment to the defence of First Nation women's rights.

Among other things, she was President of Quebec Native Women (QNW) and the Native Women's Association of Canada (NWAC), as well as Commissioner for the National Inquiry into Missing and Murdered Indigenous Women and Girls (MMIWG). Since the fall 2019, she has held the position of Senior Advisor on Reconciliation and Indigenous Education at Laval University.
Prudence Hannis
Prudence Hannis is a member of the Wabanaki community of Odanak. Trained in Sociology (UQAM) and Public Administration (ÉNAP), she has been the director of Kiuna College (Centre d’études collégiales des Premières Nations) - since its creation by the First Nations Education Council in February 2011.

Strongly committed to building healthy communities and dedicated to the defense of First Nations interests, she has found her sphere of influence in various indigenous organizations during the last twenty years: Whether as an employee or as an external consultant, she has been a key player in the development of numerous strategies and policy plans for governmental and indigenous institutions, both at the provincial and national levels.

The various initiatives she has been able to implement have led her to work closely with each of the First Nations of Quebec as well as with many actors of both indigenous and non-indigenous origin, among whom some are rooted in civil society, others in community groups, and even with the governmental authorities of Quebec and other provinces.

​Geneviève Sioui
Geneviève Sioui is a Wendat and Quebecer. She grew up in Quebec City. She holds a bachelor's degree in anthropology and a DESS in society, public policy and health from the Université de Montréal.
She has notably worked as an education support agent at the Lanaudière Native Friendship Centre and the Cégep Régional de Lanaudière. Furthermore, she was a teacher of anthropology at the Kiuna College.

Geneviève is currently responsible for building and managing partnerships with indigenous community advocacy groups at Concordia University.
​Sébastien Brodeur-Girard
Sébastien Brodeur-Girard was born and raised in Saint-Hyacinthe. He is a member of the Bar Association and a professor at the School of Native Studies at the Université du Québec en Abitibi-Témiscamingue (UQAT), where he teaches, among other subjects, the law and legal systems of First Nations.
He received his doctorate in history from the École des Hautes Études en Sciences sociales de Paris and then worked in this field for several years. He authored several popular history publications, textbooks and teaching materials.

Recently he participated in the work of the Public Inquiry Commission on relations between Indigenous Peoples and certain public services in Québec: listening, reconciliation and progress as research co-director.
​Jacques Kurtness
Jacques Kurtness is Ilnu and comes from Maschteuiatsch. He earned his PhD in psychology at the University of Laval. Among his many activities and positions, especially noteworthy is his directorate at the Collège Manitou and his research and teaching at the University of Quebec in Chicoutimi from 1979 to 1999, as well as his work as a negotiator for the Attikamekw-Montagnais Council and Mamuitum Tribal Council between 1991 and 1997.

Furthermore, he served as regional director entrusted with negotiation and implementation of contracts for the Ministry of Indigenous and Northern Affairs, region Quebec.

His expertise is solicited in the context of various groups and research projects such as the Centre interuniversitaire d’études et de recherches autochtones (CIÉRA) and the DIALOG Network.
In addition to having participated in various scientific committees for different cultural projects such as Les Espaces autochtones (the native spaces) of the Musée de la civilisation de Québec (MCQ), the Indigenous Engineering exhibition of the Science Centre and other projects of la Boîte rouge vif.

​Melissa Mollen Dupuis
Melissa Mollen Dupuis is an Innu multidisciplinary artist from Ekuanitshit. She is one of the co-founders of the Idle No More Québec movement, alongside Widia Larrivière. Since 2014, she has chaired the board of directors of the Wapikoni mobile and, since 2018, has been in charge of the Forests campaign for the David Suzuki Foundation. She is one of the recipients of Amnesty International's Ambassador of Conscience Award and has received numerous other distinctions for her commitment. She can be seen and heard in the program “Parole autochtones avec Melissa Mollen Dupuis”, which is part of Radio Canada's indigenous series.
Acknowledgements
Thanks to all contributors as well as to Annie Ouellette and Arij Riahi for lending me photographs. Thanks also to Kijâtai-Alexandra Veillette-Cheezo, who can be seen among the drumming demonstrators in the picture.

Emanuelle Dufour is a Quebecer and lives in Montreal. She is a phD candidate in Art Education at Concordia University and holds a master's degree in Anthropology from the Université de Montréal (UdeM). Her work has contributed to the establishment of Indigenous student services at UdeM. She has also completed a certificate in Film scriptwriting (UQAM) and an interdisciplinary Master's degree in Arts (Université Laval).

Since 2011, she has been working as a coordinator, project manager, assistant and then research professional and as a consultant for various projects related to  Indigenous cultural safety and the process of encounter between Indigenous and non-Indigenous populations.

She is the author of several scientific and popular science articles and has received several prestigious awards and scholarships for her work.

Since 2015 she has also been working as an illustrator, cartoonist and creative consultant for various projects. To date, her career has revolved around intercultural education and a dialogue involving nearly forty countries, including Niger, Mexico, Cambodia and Indonesia. Since 2020 she has been working at the Collège Ahuntsic as an educational consultant for Equity, Diversity and Inclusion (EDI).

More about her activities: