An interview with Winslow Porter
Mushrooms, virtual reality and a dose of nature 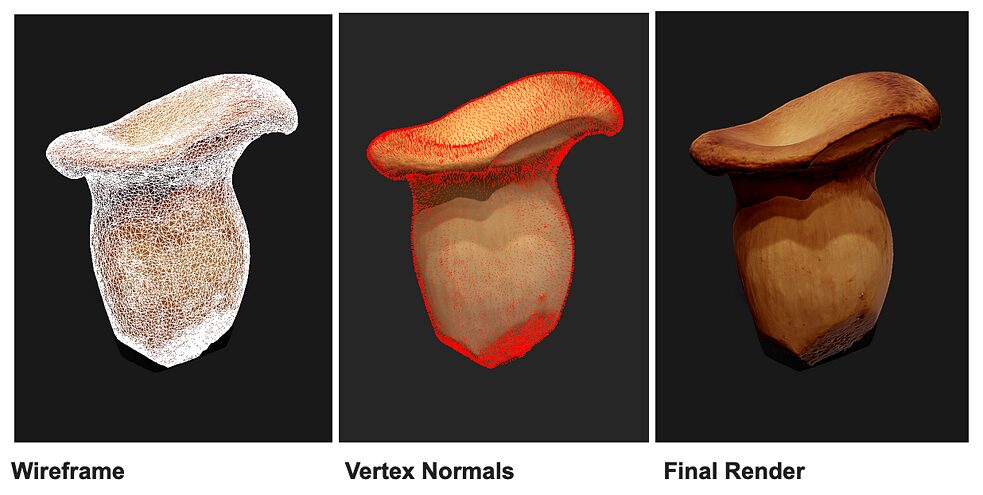 When it comes to exploring nature, our minds may drift towards thoughts of taking a stroll through a forest, hiking up hills or sitting under the shade of a tree. But Winslow Porter is taking a different approach to exploring nature through art – specifically, by bringing in technology to make it a more interactive experience, accessible to all, including those living in urban environments.

For us, we hope to demystify mushrooms, and have this be an entry way for people to understand this whole kingdom that is out there

Porter is a director, producer and creative technologist specializing in extended reality, as well as immersive installations. He previously produced the 2014 Tribeca Film Festival Transmedia Award-winning documentary CLOUDS and the critically acclaimed cinematic VR experiences Tree, and Giant. Now, Porter is working on Forager, which is one of the many projects supported by the Goethe Institute’s New Nature series.

Curiosity for the natural world

Porter spoke with Massive Science about mushrooms, virtual reality, and the inspiration behind this new project. This conversation has been condensed and edited for clarity.

Farah Qaiser: What drew you to this world of art, virtual reality and using technology to create art installations about nature in the first place?

Winslow Porter: I think a lot of the same systems that we observe in nature can also be replicated or observed in a different way – that a new perspective can be gained through technology.

I would say that I was brought back into this world with everything that’s happening now with the pandemic. I think that a lot of people have had time to think about life, their existence, what their purpose is, and ultimately, how they can get closer, instead of just sitting in a chair and taking things as a one-way form. There are a lot of ways of including the natural world into our space. Technology specifically is a way for us to educate people on that, and to be able to express how that can be fulfilling in many ways. My background is very much on the entertainment or the storytelling side, with a dash of curiosity for the natural world, and how we can observe that inside of technology.

What inspired you to launch Forager?

I come from a family that’s very hands-on when it comes to growing. Everyone in my family has a green thumb, starting with my grandmother on my father’s side. Because of the restrictions of COVID-19, I was up in Maine with my family, and if we wanted something different [in terms of mushrooms from our local stores], then we had to grow them ourselves.

its own social network

I was able to connect with a place called North Spore, up in Maine, and buy their kit. I built myself a monotub. I saw how quickly these mushrooms were growing – obviously, a lot of attention had to go into it, and it was very much a process. But once you get everything right, it’s like you can bring this amazing otherworldly creation, and process, into your home. In under a week, you could do a full life cycle, from activating the spores to witnessing the fruiting bodies come out of the ground. If you didn’t cut out all of them, you could witness the decay too.

Seeing the full life cycle in a controlled environment is amazing, because not only are they delicious, but they’re also beautiful. It feels so abstract or alien because we don’t understand mushrooms – many believe that they’re closer to animals than they are plants, so it’s still this world that we don’t fully understand. Whether it’s their beauty or taste, there are many ways mushrooms can get you hooked and involved in trying to learn more about them or propagate them – to grow them for yourselves.

For me, it started as sort of this passion, like a food pet or a quarantine hobby, which turned into something that I was a lot more interested in learning and reading a lot more about, including understanding foraging and taking it from inside the home to state parks and preserves around the mid-coast area of Maine.

It almost became its own social network. Just like these vast mycelial networks of mushrooms, this sort of spreads to other people. Once you show how easy it is, and how you’re also saving money by growing these yourself, a lot of other people started building monotubs or putting hay in their backyard and cultivating mushrooms themselves.

“Tree" invites you to become one with a kapok tree in the Amazon. “Tree” is a virtual experience by Milica Zec and Winslow Turner Porter III of New Reality Company (creators of “Giant”) that explores the beauty and mystery of the Peruvian Amazon—and the horror of deforestation. The Rainforest Alliance is proud to be the official conservation partner for this moving piece, which premiered at the 2017 Sundance Film Festival. © New Reality Company
So it was Tree, growing mushrooms myself and the third [inspiration for this project] would be the work of Louie Schwartzberg. Good TV was hard to find this summer, to put it lightly. Louie Schwartzberg is a stop-action photographer, one of the most notable ones in the field. He created a movie called Fantastic Fungi, which shows all these different mushrooms, their growth cycles, and experts in the field talking about how they’re important for nutrition, but also for mental health and regulating different ecosystems on the planet.

In "Forager", you are planning to volumetrically capture (3D scan) the complete life cycle of mushrooms, from spore to decay, in collaboration with Elie Zananiri, Hugues Bruyere, and Ariel Nevarez, and two advisors, Smallhold Mushrooms’ Adam DeMartino and Lenscloud 3D’s Ivin Ballen. Tell me about some of the technology that’s allowed this project to take place.

We took the idea of time-lapse photography. While this is incredibly captivating, it is also limiting in the sense that it’s only shot from one perspective. So then, I built a team of people who are also really fascinated with mushrooms, and have a background in video game engines, art technology as well as capture technology.

My long-time collaborator and friend, Elie Zananiri, is an Emmy-award winning technologist when it comes to capture technology and video game engine software. I presented the idea of being able to not just capture something through time, but what if we could also capture mushrooms from all the different angles? We then started brainstorming a way to build a capture rig.

So far, from what we’ve learned, this approach has not been performed. People have done time-lapse photography – witnessing something, taking individual stills and then putting that in a video file so that it seems like it’s happening in front of you. People have also done volumetric capture, which means capturing an object from every different perspective. That could be 100 still photos or that could be a video, and then broken into stills. But because you are able to capture every single angle, you’re then able to use software to stitch that into a 3D object, and it’s also photo real. If you see it inside a video game engine, it feels like it’s really living.

So I’m really surprised to hear that no one has previously volumetrically captured (3D scanning) the complete life-cycle of mushrooms! Do you know why?

People have captured the life cycle of mushrooms, but to the best of our knowledge, no one has captured it volumetrically. I think the reason that no one has done it is because it’s a very time-consuming operation, and you have to have a level of automation. Technologically speaking, it’s a rather complicated problem – not just the capture and the automation, but also animating the 3D assets from the smallest, to largest and the decay cycle of mushrooms.

First, our goal is to develop this pipeline, because it’s very much an experimental pipeline that from our research, hasn’t really been explored. We’re going to capture the Lion’s Mane, the Black Trumpet, as well as the Blue Oyster mushroom.

We feel that as though volumetric art, film-making and capture in general is going to be another wave of film-making. It is going to be something new because the technology is going to allow us to capture the natural world in a way that just wasn’t possible before. It is also consumer friendly. We’re able to do this with a point-and-shoot camera, and a depth sensor from Microsoft that costs a little over $300.

the role of mushrooms

We really wanted to be able to capture the full cycle of life in a way that people haven’t witnessed before, and also be able to use this technology as a way to educate people – to be able to have these 3D assets available for people, in a sense that’s just like an encyclopedia, to explore, discover or experiment with. It’s sort of a two-pronged approach, where we’re creating a tool, but from this tool, we also want to be able to create art. What’s fascinating is that there’s so much we don’t know, and that’s why we’re documenting every stage of the exploration so that we can educate others too, and open this up to a larger community.

What are you hoping that viewers will take away from Forager?

I think that there will be a child-like wonder or re-connection with nature in seeing how diverse, powerful and all-encompassing it is. Even if we relegate ourselves to our homes in urban environments, nature is still there. It’s all around us. For us, even if it’s a virtual mushroom, presented through a smartphone, or augmented or virtual reality glasses, we’ll have that connection.

I think that another goal is to be able to develop some standards in volumetric capture and time-lapse on a more scientific or technical scale. Being able to see how the two come together is really where the wonder of this project will take place.

I read a recent story about how a student in Nebraska built a fully functional canoe out of mycelium, about how mushrooms can consume plastic and are even a solution for packaging. What do you believe the role of mushrooms are when it comes to the environment, the world, and potentially, even climate change?

I think that there is so much baggage when it comes to mushrooms. Even when I talk about the project, people think that I’m doing a project on psychedelics, and that’s not what this is. I think that this has confused the issue, and what the role of mushrooms are in this world. With more research that is being done, and the more that we demystify them, the public’s perception will be more open to see them as something that can break down fossil fuels, biochemical compounds and plastics.

For us, we hope to demystify mushrooms, and have this be an entry way for people to understand this whole kingdom that is out there, that has always been here, and is just waiting to be explored.