Trailer The Trial of Superdebthunterbot from Helen Knowles on Vimeo.

Italian artist Davide Quayola employs algorithms to provide new perspectives on famous icons of the art world. The original Renaissance paintings that serve as raw material for his colourful, abstract paintings  are hardly recognizable in the finished pieces. His Iconographies series was based on famous works of art from his homeland. He used AI software to remix the originals, abstracting and emphasising colours
and details. “Misuse of technology is interesting for discovering new things,” Quayola says, adding that while the software replaces him, it does not replace the artist, and merely changes the artist’s role. He views algorithms as “musical instruments” for him to play with.


Technology is also changing processes of art production and digital art is no longer necessarily a solo endeavour. Artists often work with developers, and software and robots can also be valuable team members. In Quayola’s Sculpture Factory series, industrial robots create sculptures inspired by Michelangelo in real time in the art gallery. So generating
art becomes part of the installation itself. 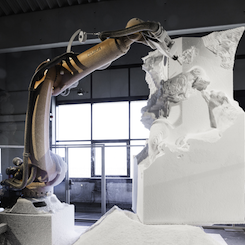