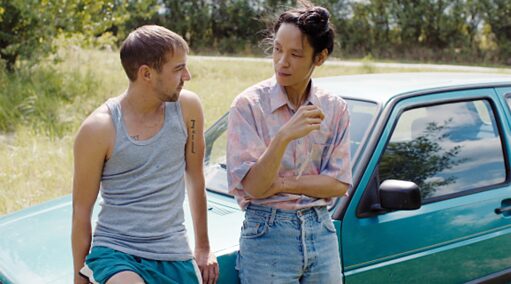 Presented by the Goethe-Institut Toronto
with Inside Out Film Festival

Should I stay or should I go? How to live our lives very much centres around whether to live in or out of our (imagined) urban spaces. Cities can mean connectivity and community or boredom and loneliness, they are projections of dreams and disappointment, places of becoming or despair.

Across three new films —poetic, rough, melancholic, hopeful, curious and longingly— GOETHE FILMS enters worlds of urban absence and aspiration: around social struggles and gentrification (“The Mover”), around provincial and urban (queer) lives (“Neubau”), and of the yearning for participation and human contact in Berlin, across gender, generations, and backgrounds (“A Lonely City”).


Summer in Brandenburg, outside of Berlin. Markus is torn between the love for his grandmothers in need of care and the longing for a different life in Berlin. A crowd of shimmering demons keeps appearing in his daydreams. An allusion to the queer chosen family that awaits him in the city and saves him from his loneliness? Markus' boxes are packed, ready to move to the big city. So when he falls in love with Duc, things get even more complicated.


“Quietly, but all the more powerfully, Schmit directs a multi-layered film based on the script by lead actor* Tucké Royale, far away from dusty clichés. Where do I want to live, and how? With tremendous ease and (queer) naturalness, the drama approaches the big and small questions of life with a lightness of touch that has rarely been seen in German cinema.” – Queer Film Festival Munich

“The Brandenburg that Markus lives in, calmly and without declaring war, defies notions of provincial normativity.” – Missy Magazine

"The director beautifully shows how it’s not a man's sexuality that is the problem here, but rather coming to terms with a life between family, obligations and the dreams one has." – Deutschlandfunk Kultur

Johannes Maria Schmit was born in 1981. He studied directing at the Ernst Busch Academy of Berlin. Schmit has been teaching at ZHdK Zurich, Teaterakademi Helsinki, Goethe University Frankfurt, and others. In 2017 he won the Leipzig Movement Art Prize together with the Danish artist Inga Gerner Nielsen. Schmit has been a PhD student at the Stockholm University of Art since 2019. “Neubau” is his debut film.


Ahmed Allahwala is a German-born and Toronto-based professor of human geography at the University of Toronto. He received his MA at the Free University Berlin followed by his PhD from York University Toronto. His research and teaching focuses on community development and urban social change, city politics and urban planning, as well as migration and multiculturalism.


Tailored to fit the moment GOETHE FILMS resume at the digital TIFF Bell Lightbox with exclusive online access for Canadian viewers. All tickets will be on sale 10 days prior to screening. Once purchased, viewers will have a 48h watch window to hit play. After hitting play, you have 24h to watch the film once. For further questions feel free to visit digital TIFF FAQs, contact TIFF customer support at customerrelations@tiff.net, or the support chat at tiff.net/help daily from 2- 8 pm (incl. weekends and holidays).

Part of the Goethe-Institut focus on German film

Part of series GOETHE FILMS: LONELINESS IN THE CITY