Founded in 2005 by and at the Goethe-Institut under the playful moniker “Eh! U – Meet the Europeans” as a celebration of a diverse but joint cultural expression, the EUFFTO kicked off with an ambitious and enthusiastic program of 15 participating countries. In the first edition, Germany presented HEAD-ON by Fatih Akin, Austria participated with DOG DAYS by Ulrich Seidl – all came together to reflect the excellence, innovation, and boundless aesthetics of European cinema, to offer Toronto audiences a wider selection of cinematic styles, and to strengthen European-Canadian cultural dialogue and exchange.

Quickly, the popular festival outgrew the Goethe-Institut's in-house screening room and reacted to the rapid expansion of the European Union. Today, for two busy weeks each November at Toronto's Royal Cinema, all 28 EU member states participate in the festival and present the best cinema their countries have to offer, from dramas to comedies, from feature films to docs.

The festival program reflects the cross-national relationships within the European Union. In 2008, the Goethe-Institut showed the German-Polish coproduction AND ALONG COME TOURISTS by Robert Thalheim, starring a young Alexander Fehling (INGLOURIOUS BASTERDS), and brought Polish lead actress Barbara Wysocka as a guest. The Goethe-Institut’s Program Curator Jutta Brendemühl, who has been a director of the board since the festival’s incorporation in 2010, comments on the border-crossing nature of the festival:

Nearly three dozen films are shown each year, for which the audience is lining up along College Street for mostly sold-out shows. “The hottest tickets in town,” judged the Globe and Mail. The festival’s profile perfectly complements Toronto’s reputation as the world’s most multicultural city. Actor and former City of Toronto Film Commissioner, now Canadian Counsul General in Los Angeles, Zaib Shaikh, also complimented the initiative: “I don’t usually look right into a camera and tell someone that I love them. But European Union Film Festival – I love you!”

Each year the festival visitors have the opportunity to vote for their favourite film. The Goethe-Institut’s film selection has won the EUFFTO Audience Award three times: 2011 with the game-changing migration comedy ALMANYA – WELCOME TO GERMANY by Yasemin Şamdereli; in 2016 with Til Schweiger’s tragicomedy HEAD FULL OF HONEY, which tackles dementia and modern family dynamics; and yet again in 2018 with Simon Verhoeven's biting refugee comedy WELCOME TO GERMANY. Verhoeven happily accepted the award during the Goethe Berlinale Brunch in Berlin. Other German award-winning films shown at the festival were Andreas Dresen’s STOPPED ON TRACK, THE BAADER MEINHOF COMPLEX and others, often as Canadian or Toronto premieres. 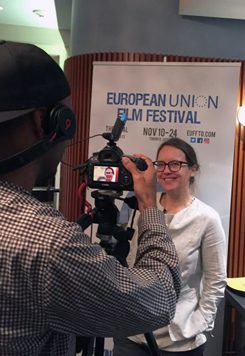 Wiebke von Carolsfeld | Photo: Jutta Brendemühl Discussions with directors, film experts, and European talent contextualize the work of the festival. In the 2016 edition of the festival, German-born, Montreal-based director Wiebke von Carolsfeld (MARION BRIDGE with Ellen Page) talked with Greek film industry veteran Panos Karkanevatos and the Netherlands’ multi-award-winning director Joram Lürsen about the identity of European cinema. TIFF manager Christoph Straub, who moderated, comments: “The EUFFTO provides Toronto audiences with the opportunity to see some of the‎ best European cinema and to meet the incredible creative talent behind those films, from directors and screenwriters to actors and producers. Showcasing the diversity of European culture and politics, this unique event encourages open dialogue, challenging all of us to re-consider what Europe means.”

In 2010, the screening of the English-language drama STORM by Hans-Christian Schmid, starring European all-star cast Kerry Fox, Alexander Fehling, and Rolf Lassgård, was accompanied by a panel discussion about human rights, bringing Canadian philosopher Mark Kingwell and German human rights lawyer Mirja Trilsch to the stage of the Royal. Montreal-based Trilsch worked at The International Criminal Tribunal for the former Yugoslavia at The Hague – in the actual role portrayed by Fehling in the film.

2014 marked the 25th anniversary of the fall of the Berlin wall, which the Goethe-Institut marked with Christian Schwochow’s critical refugee drama WEST, introduced by the former director of the Stasi Archives Mecklenburg-Vorpommern, GDR dissident Jörn Mothes, who also took part in a debate on “Europe 25 years after the fall of the Berlin Wall” at the Munk School of Global Affairs during the festival. Similarly, on 9 November 2019, the EUFFTO looked back with East-West escape thriller BALLOON by Michael Herbig. The audience overwhelmingly voted for BALLOON as the festival favourite, affording Germany four audience choice awards.

For Canadians, the festival offers a unique chance to join a community of curious cineastes and to see outstanding European movies, which often do not receive the theatrical runs and audience exposures they deserve. The EUFFTO is funded and organized by the European cultural institutes and consulates. The festival executive continues to innovate, including accompanying exhibitions at the Goethe Media Space, like “Fassbinder 1945 – 1982” or “Faces behind the Voices” on dubbing actors. Select screenings are preceded by international shorts or introduced by Canadian film students. Another recent initiative was the EUFFTO Classics series, complementing the EUFFTO’s program of contemporary film by showcasing canonized European films, whether France’s JOUR DE FETE or Italy’s JOURNEY TO ITALY. Germany presented Wolfgang Becker’s GOOD BYE, LENIN!, the quintessential hit comedy that defined the coming together of a nation after 1989 and launched 25-year old Daniel Brühl’s international career, in the inaugural Classics program.