The launch event theme of this successful series was "Art as an Early Warning System." Gesche Joost, Professor for Design Research at Berlin’s University of the Arts, and head of the Design Research Lab, spook about “Design Fiction”. She was joined by Toronto futurist Sanjay Khanna’s exploration of the arts and culture as early warning signals of societal risk. 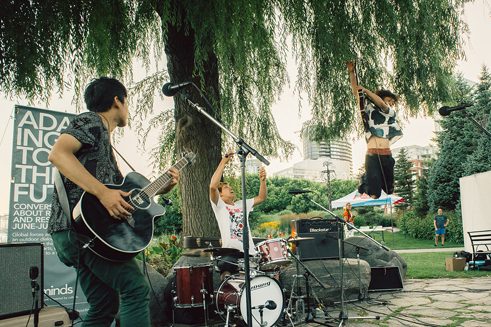 
The second conversation on the theme of "We or I? Doing Good in a Digital World" featured former Canadian director of Berlin's Transmediale Stephen Kovats, now director of Berlin’s r0g_agency for open culture and critical transformation, which aids in establishing a civic society in the new state South Sudan. Complementing Stephen’s presentation was Ilana Ben-Ari, founder of Toronto-based Twenty One Toys. Ilana spoke about socially innovative design and its role in helping children and adults become more collaborative.

An artistic dialogue on "Mindful/Digital: Art & Cultural Resilience" concluded the series. Hamburg artist Annika Kahrs, born in 1984, studied fine arts with Harun Farocki, and works in photography, film, music, and even with live animals. In her video works on the dwarf planet Pluto she expressed an interest in how objects in a seemingly stable orbit are still subject to change. Her works have been exhibited from the Hamburger Bahnhof Berlin & the 5th Thessaloniki Biennale of Contemporary Art to the United Art Museum in Wuhan, China.

The conversations were accompanied by audience iPads and Tweet Chats and were followed by an open forum with the presenters and audiences.


Open Minds: Adapting to the Future was curated by Jutta Brendemühl & Sanjay Khanna and presented by the Goethe-Institut & Harbourfront Centre and media sponsor Peeps.

Thank you to Lufthansa for flying our artists!