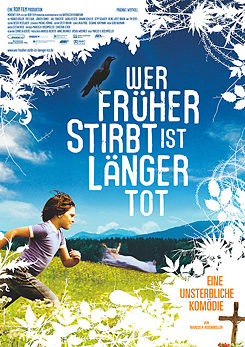 11- year-old Sebastian lives with his father and his older brother in a Bavarian village. One day the boy finds out that his mother died when she gave birth to him. Night after night he has nightmares in which the Last Judgement comes upon him and he is sentenced to eternal purgatory!

There seems to be only one way to escape this fate: he has to become immortal. After a series of unsuccessful attempts, Sebastian realises that his only chance to achieve his goal is to become a rock star.

“Tumultous story of a scallywag in Bavarian dialect, which wittily and disrespectfully oscillates between comedy, farce, and peasant theatre, but which despite all the jokes doesn’t take it too lightly.” – Encyclopedia of International Films

“The central scene of the film – an imagined, highly theatrical Last Judgment, which the hero dreams up – is the triumph of cinematographic imagination, and one would love to shout ‘hurray’ because it has been quite a time since something comparable has been created.” – filmmaker Dietrich Brüggemann, Schnitt Online

Marcus H. Rosenmüller, born in Bavaria, in 1973, studied at the Munich Academy for Television and Film. Before graduating, he had already called attention to himself with his short films HOTEL DEEPA, CARAWAY AND CORN, and ONLY JOINERS MAKE WOMEN HAPPY, which were shown at various international festivals and awarded audience prizes. Rosenmüller produced multiple episodes of the documentary series "Somewhere in Bavaria" for Bavarian radio. With GRAVE DECISIONS, Rosenmüller made his feature film debut. In subsequent films, which include BEST TIMES (2006) and its sequels BESTE GEGEND (2008) and BEST CHANCE (2014), he remained faithful to his preference for stories rooted in his Bavarian homeland.