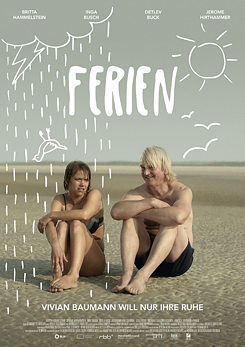 Vivian Baumann is exhausted. She’s on her way to becoming a district attorney and about to move in with her boyfriend, but she feels stuck. She tries to retreat to her mother’s, but there is no room for her either. Her father thinks she just needs to take a break and sends her off to a Frisian Island in the North Sea.
Vivi takes pleasure in the tranquil village full of seniors and decides to stay on the island. She finds herself a job in an old junk shop and a room at Biene’s, a single mother who lives with her 13-year-old son Eric in an enchanting cottage. Apparently, though, not only Vivi needs a break: One day, Biene packs her things and disappears. Suddenly, Vivi finds herself between other people’s children and her own problems.

Bernadette Knoller was born in Bavaria in 1986 and grew up on a farm in Schleswig-Holstein. She studied at the Film University Babelsberg Konrad Wolf and has worked as an assistant director at the Thalia Theater in Hamburg. Her films include the shorts A24 ABFAHRT WITTENBERG (2008), MEIN MALLORCA (2010), MAMA UND PAPA (2010), ALTE ÄSTE (2012) and her feature debut HOLIDAYS (2016).