Goethe-Institut London and Somerset House Studios are collaborating to establish a new international artist residency programme to support a Germany-based artist working at the intersection of music, art and technology.

For the inaugural edition, we welcome artist, DJ, writer, and performer Juliana Huxtable. While we worked remotely with Juliana last May due to the COVID-19 pandemic, we are now looking forward to welcoming her in London for two months from October this year. 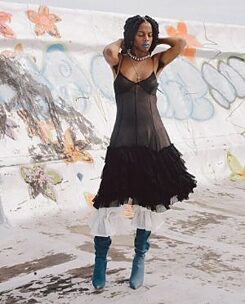 Juliana Huxtable - Somerset House Studios | © Juliana Huxtable Using the structures of music as mediums in her multimedia universe, Juliana Huxtable is a DJ and musician singular in her approach. Where her visual art and poetry navigate the complexification of desire in a life increasingly mediated by technology, her music utilizes the sounds of technology itself to construct parallel realities to be inhabited and embodied in rhythm and harmonic tableaux.

Her sets skillfully deploy the notion of sampling, and re-blogging as DJ strategies, ecstatically mixing an array of influences that frolic at the boundary of genre intuition and experimentation. At once an assertion of freedom and an ode to the evolutionary structure of electronic music subcultures, she aspires to the sublime in what can often only be described as a witchcraft seance behind the decks on stage.

The Powerful Art of Juliana Huxtable

Talking Culture EP. #8: Clubbing and Culture in times of Covid

Our new #TalkingCulture podcast: Episode #8. "Clubbing and culture in times of Covid" is out now! Listen to DJane and artist Juliana Huxtable speak about her music, image, DJing and how it felt to be the first resident of our X Somerset House Studios artist residency this year.

Juliana Huxtable draws her influences from a whole range of diverse sources. Get insight into the artist's world of ideas - and you might get inspired yourself!

Juliana Huxtable has put together some of her musical influences. Have a listen on the website of Somerset House Studios!

Immerse in the art of Juliana Huxtable by feeling the electronic pulse of her music: unpredictable, powerful and multilayered, this music mix is made to enjoy and explore!
- Presented by DJ Mag!

This year's artist of the residency programme Goethe-Institut London X Somerset House Studios responds to the provocation I Should Be Doing Something Else Right Now! In this series, six artists will be experimenting with the production and editing tools at hand, streaming their performances live from home!

In the Somerset House Studios series Grounding Practice, invited artists discuss the sustainability of their practices, their inspiration and how they navigate, negotiate and contribute to the contemporary contexts in which they’re making work. In this digital edition, our artist in residence Juliana Huxtable will be speaking in a livestream!

Find out more about Juliana Huxtable via the Somerset House website