The exhibition FORM and LANDSCAPE: Bauhaus in New England – Photography by Mark Römisch was supposed to open in early April but was postponed due to COVID-19. As a result, we are moving online, sharing various insights into the project and resulting exhibition (which was hung in March), to be rolled out over a number of weeks as restrictions are slowly lifted. Check back regularly for updates!

The project began as part of the 100th anniversary celebrations of Bauhaus in 2019. Our aim was to visualize the special connection and mutual attraction between the Bauhaus and New England with a photo essay. Photographer Mark Römisch spent one year exploring and photographing the Bauhaus treasures located in Massachusetts, the direct result of Walter Gropius accepting a professorship at Harvard and settling in Lincoln, MA in 1937. Mark beautifully captures the essence of the little-known colonies in Wellfleet, Lincoln and Lexington, and their inhabitants. His photographs can (will) be viewed at the Goethe-Institut Boston, online at Form and Landscape: Bauhaus in New England and in a book which can be purchased at Mark Römisch's website. 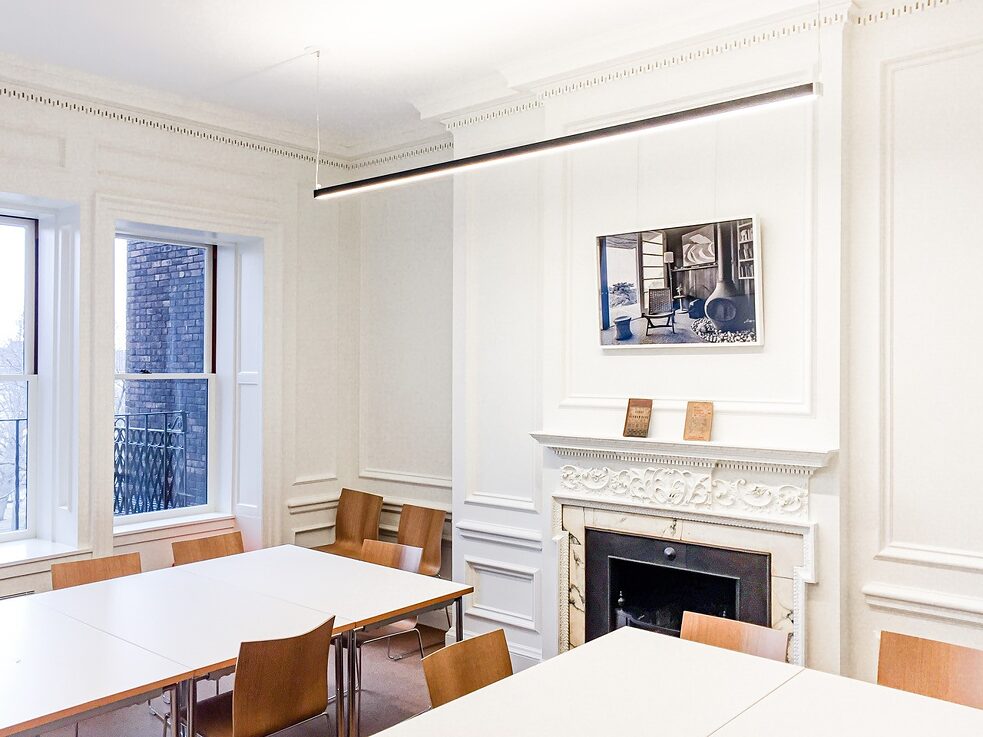 Photo: Mark Römisch Mark Römisch, born in 1974 in Cologne, is a German photographer, actor and theater director. His photographic work reflects his fascination with visualizing abstract topics ranging from current political and human rights issues to exploring the interaction of Man and Nature. His work as an actor and theater director continuously influences the visual language in his photographic works which move between the documentary and fictional.

We asked Mark about the project, his approach to photography and more:

What did you learn about the Bauhaus while working on 'Form and Landscape' that you didn't know going into the project?

It was fascinating to learn about the vibrant community of creatives, intellectuals, and Bauhäusler, who started gathering on Cape Cod in the late 1930s. The designers amongst them created with simple means houses for themselves, their friends, and their clients. Walter Gropius and Marcel Breuer had already built their family homes side by side in Lincoln, where they lived year-round. But it was in the secluded pinewoods on the Cape where the group of refugees and friends around them spent their summers. In communion with nature, on walks through the forest and during evening festivities, they exchanged ideas that influenced their professional work. When I explored these extraordinary places of solitude on the Cape, I got a sense of the inspiration Gropius and his comrades had found there.

What surprised you most about the Bauhaus architecture you discovered in New England?

The contrast between the sharp lines of the modern architecture and New England's rugged nature, and how the designers blurred indoors and outdoors captivated me immediately.

I approached this project without having a preconceived concept in mind. I had some ideas, but nothing worked out. Some of these places, as the Gropius House itself, have been photographed numerous times. Having artistic freedom granted for this project, I spent extra time in the houses to let their atmosphere work its magic. To experience the integration of man with nature, that the designers had in mind, made an impact on me that I had not anticipated. Ultimately, the visual theme of the project revealed itself thereby.

On a more personal note, the project was also a trip down memory lane for me. I grew up outside of Cologne in a modern house that my father co-designed. The living room featured a large sliding door to the patio outside. I haven't been in that house for over 25 years now. When I photographed Weidlinger House on Cape Cod, I noticed a sliding door just like the one in my father's house. The frame, the large turning handle, every detail looked similar. When I opened the heavy door, the sliding mechanism made a very distinctive sound that threw me right back into my childhood. Fascinating, how the sound of a sliding door can trigger an emotional response.

Do you prefer working with B&W or color photographs? What makes you choose one over the other?

In my work, there is a place for both. When a subject is better suited for color or B&W, I approach them differently. That being said, black-and-white photography is my preferred choice for my fine-art work. We see in color, so when we see a grayscale photo, it gives us a reason to pause and consider the image a little bit longer. The earliest photographs are in black-and-white, and we have come to associate a sense of timelessness with these images. When we are confronted with a color, it evokes an emotional reaction to it based on our associations with that color. By reducing the visual information in an image by stripping it off of its color, I can direct the viewer's attention on details as form, and light and shadow, within the composition.

Working in black-and-white as a photographer changes the way you perceive your subjects. You need a different, more abstract visual mindset, and I cherish that challenge. The structure and spatial relationships take precedence, and shapes, lines, textures, and contrasts become more prominent. For "Form and Landscape," I knew right at the beginning of the project that it had to be photographed in grayscale. I wanted to preserve the notion of the houses as time capsules for the ideas of Bauhaus, and focus on the character of the modern design.

You seemed very excited about taking on this project. What excited you about it? What story are you telling with this exhibition?

Bauhaus design and the aesthetics of modern architecture have always been very appealing and inspiring to me. When the Goethe-Institut approached me with this project, I didn't have to think twice about it.

A photograph can take us on a journey to places we would otherwise never be able to see. Having the opportunity to take the audience through my images to these unique places in New England is one of the things I love about being a photographer. The scope of the project allowed me to create a visual narrative of how Bauhaus architecture and New England's wild nature form a perceptible alliance. At the same time, the images give the viewer enough space to imagine their own stories.

In my book about the project, photo critic Collier Brown wrote: "The camera approaches the building as a deer might approach it: cautiously, keeping its distance. [...] The emphasis on encounter forces us to negotiate formal, functional space with nature's baroque embellishments." I love Brown's association here, as it perfectly captures my feeling during the process of photographing. This sense of encounter is what I want to share with my audience.

You are equally an actor and a photographer. How do you see these two very different art forms uniting in your practice? And do you think your acting side informed or influenced this project in any way?

Both acting and photography require an excellent sense of place. When I start working, I take my time to explore and feel my environment, the set design, or the location. It affects my mindset about the particular project and inspires my approach to create a compelling dialogue between me and my counterpart.

For "For and Landscape," I stayed a few days in the Kugel/Gips house on Cape Cod. After the first night, I had a clear vision of how to proceed with the project. I knew that the dialogue between my camera and the houses had to include New England's landscape.

Do you have a favorite place in New England that you love to hang out at?

Nantasket Beach! The rugged beach south of Boston is my favorite place for relaxation and inspiration.
In summer, it is a fun place for surfing and the perfect place to watch the colorful microcosmos of Boston folks. During winter times, I can walk for hours along the deserted beach between the icy Atlantic waves and picturesque beach houses. A lot of my projects are taking shape in my mind on these walks. Plus, it features a spectacular (and very photogenic) sunset and probably the best ice cream place south of Boston.