To celebrate the 100th anniversary of Bauhaus, the Goethe-Institut Boston visualizes the special connection and mutual attraction between the Bauhaus and New England with a photo essay. Photographer Mark Römisch beautifully captures the essence of the little-known colonies in Wellfleet, Lincoln and Lexington (Massachusetts), and their inhabitants.

Hidden deep in the woods on the Cape Cod peninsula of Massachusetts, immigrant architects surrounding Walter Gropius and Marcel Breuer build summer houses for their families and friends with the simplest of materials. With the boundary between inside and outside blurred, the contemporary, clear lines of the Bauhaus architecture enters into dialogue with the tranquility of the rugged nature on the Cape.

Like a dweller of the surrounding woods, the approach with the camera into these half-forgotten traces of the Bauhaus movement begins carefully, retaining a distance, with awakened senses, and explores the proximate encounter of architecture and landscape, of Man and Nature.

The view from outside onto the extensive glass facade of the Hayden Wallings Halprin House invites the lush New England nature inside as a reflection of itself. Emerging from the formal, functional interior of the Kugel/Gips House, the baroque embellishments of the surrounding trees and shrubs disclose themselves to the beholder. To step down from the wood shod veranda is like stepping onto a faraway planet.

Escaping the rising unrest in Nazi Germany, Gropius and the armada of Bauhaus artists that followed him find their longed for spiritual and physical freedom in New England.

It is a freedom that is mirrored in the design of the Gropius House as well as the private residences of the Six Moon Hill colony, tightly tied to a desire to connect with the Outdoors and an appreciation for local architectural traditions.

The Bauhaus School presented the 20th century with a new self-awareness in relation to the immediate environment. The encounter between these new ideas and the unique landscape of northeastern United States is tangibly kept alive through the Bauhaus movement legacy in New England.

During the Depression many rural New England towns were isolated, and sparsely populated, especially on outer Cape Cod. Photographs of Truro from the 1930s show small boxy houses, temporary outposts in a treeless, desolate moor. However, the New England coast soon proved to be fertile ground for new ideas from across the Atlantic. 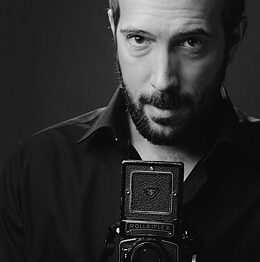 Mark Römisch, born in 1974 in Cologne, is a German photographer, actor and theater director.  His photographic work reflects his fascination with visualizing abstract topics ranging from current political and human rights issues to exploring the interaction of Man and Nature. His work as an actor and theater director continuously influences the visual language in his photographic works which move between the documentary and fictional.