I've recently been captivated by rhythms that are humanly unintuitive — arrhythmic, off kilter, too slow or too fast. Is there something free here, at the extremity of perception? What is the feeling of freedom in sound? 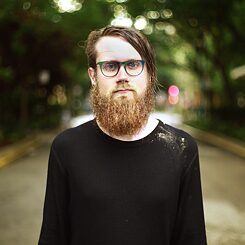 © Corey Smith Corey Smith (he/him) is a composer, writer, and performer based in Chicago, Illinois. He is a 2017 and 2018 grantee of the City of Chicago's Individual Artist Program as well as a 2018 recipient of an Emergency Grant from the Foundation for Contemporary Arts. Corey has been an artist in residence at Light Box Detroit, the Tallgrass Prairie National Preserve, the Iowa Lakeside Laboratory, and Grin City. His work has been seen at Links Hall, the Detroit Fringe Festival, Frank Lloyd Wright’s Emil Bach House, and numerous venues around the USA. His longstanding project, The New Prairie School, has been featured by Architectural Digest.

Corey is an avid collaborator and has worked in various capacities as sound designer, assistant director, performer, and composer for artists such as Every House Has a Door, Rough House Puppet Theater Company, the Suburban Piano Quartet, director Lindsey Barlag-Thornton, and many others. Most recent collaborative credits include works seen at the Bath Fringe Festival, Steppenwolf Theater, Co-Prosperity, the McCormick Bridgehouse and Chicago River Museum, and Roman Susan.

Corey holds an MFA in Performance from the School of the Art Institute of Chicago. He completed his undergraduate degree in Music Composition at the University of Michigan, where he studied under Kristin Kuster, Bright Sheng, Evan Chambers, and Holly Hughes. He is a collaborator, a friend, a proud Midwesterner.

Next: Maryam Faridani: Baad
Back to the overview