By using motion-capture in live performances, I am able to play and interact with visuals/sounds generated by the body in real-time, creating an exchange that further bridges the physical and the digital realms.

Experiments in Free Drumming Intermission will be published on January 21. 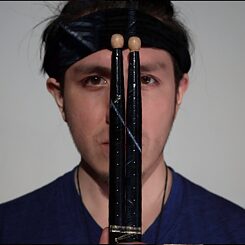 © Sal Moreno Sal Moreno is an interdisciplinary artist based in Chicago who engages with computation, sound, performance, and new media. He generates work that integrates motion-capture technology into live performances that allows him to experiment and play with visuals and sounds that are generated by the body in real-time, creating an exchange that further bridges the physical and virtual realms. Sal spent his early undergraduate years involved in competitive percussion ensembles in circuits such as Winter Guard International and Drum Corps International. He has exhibited work at Ars Electronica, Mana Contemporary, High Concept Labs, NoNation Art Lab, and School of the Art Institute of Chicago, including the New Blood XIV Performance Festival and the Impact MFA Performance Festival. He has shown work as part of a United Nations conference in NYC, and also has participated virtually in collaboration with artists from the UK and Brazil, producing work that has reached international audiences. Sal has recently earned his MFA from School of the Art Institute of Chicago in Art and Technology Studies.

Next: Corey Smith: Song 17
Back to the overview