German Series in Canada
“1899”: Sailing Into the Dark Unknown

There was immense hype in the run-up to its release: “1899” reportedly cost almost 50 million euros, making it the most expensive German series ever made. The team behind the wildly successful hit “Dark” promised even more mystery, even more thrills and chills, and even more riddles, and founded Europe’s first LED studio for the complicated project with Babelsberg. The bar was set very high, given that “Dark” is the most popular Netflix series ever made. So, was all the hard work worth it?

Series that require a cheat sheet are a bit tricky. Unless the “viewing cheat sheet” is part of the hype, as it was for 1899. Baran bo Odar (director) and Jantje Friese (writer) announced their new mystery thriller as a “truly European series” when filming began. Clearly, this was no exaggeration. The Babylonian mix of languages aboard the migrant ship Kerberos proved a clever choice by the Dark duo that upped the suspense level. “The question we explore here is what connects us and what separates us, and how fear can foster the latter,” the producer pair told US Variety Magazine. So: turn off the dubbing, switch on the subtitles and set sail for a wild journey into the subconscious.

The brain holds all the secrets of the universe. There is a hidden world inside of us that remains to be decoded

Friese and Odar’s eight-part series with its stylistically dark aesthetic is a horror trip enveloped in ocean fog into the depths of the psyche with strong echoes of Sigmund Freud. The steamship Kerberos sets sail from Southampton for New York in the year 1899. Passengers from different countries, classes and origins are all thrown together on board. The one thing they share is the desire to leave their pasts with all the trauma, family drama and mistakes behind them for The New World – as quickly as possible. This is also true of young doctor Maura Franklin (Emily Beecham), who has dedicated her life to brain research. “The brain holds all the secrets of the universe. There is a hidden world inside of us that remains to be decoded,” she says. The only question is whether it might not be better if some things remained hidden. Everyone aboard the Kerberos is lugging a lot of emotional baggage around with them.

So, it is no surprise that the passengers get surly when Captain Eyk Larsen (Andreas Pietschmann from Dark) changes course on the high seas to follow the radio signal of the Prometheus. The Kerberos’ sister ship has been lost at sea for four months. Larsen and his crew find the steamship floating rudderless in the Atlantic. When they make a disquieting discovery on board, the shipping company radios a message to “sink the ship!” And for a while, that is the last contact with the outside world. A fog rises and the navigation equipment goes berserk. When Captain Larsen decides to steer the Kerberos back toward Europe, things get completely out of control – and that is just the beginning. 1899 is not a feel-good series to watch while you’re doing something else. It is a demanding, complex and both literal and figurative dark Odyssey. Lost souls wander like will-o-the-wisps through narrow, wood-paneled corridors and the sooty lower decks of the Kerberos, a nightmare in Victorian steam-punk flair. Above it all floats an ambient soundscape created by Australian-Icelandic composter Ben Frost, familiar to fans of Dark, complete with a take on the Jefferson Airplane classic White Rabbit that will give you goosebumps.

The first season of 1899 reportedly cost almost 50 million euros, making the mystery drama the most expensive German series of all time. From a technical standpoint, the eight-part series also plied new waters. After the global success of Dark (also Netflix), author Jantje Friese and director Daran bo Odar (The Silence) not only founded their own production company Dark Ways. They also worked with Studio Babelsberg to create the first LED studio in Europe. According to Netflix, it is the largest virtual production studio of its type in the world. The novelty is that there are no more green screens in the historic halls of Potsdam-Babelsberg. Instead, virtual locations are projected onto LED installations behind the actors – scenes aboard a ship in the case of 1899. 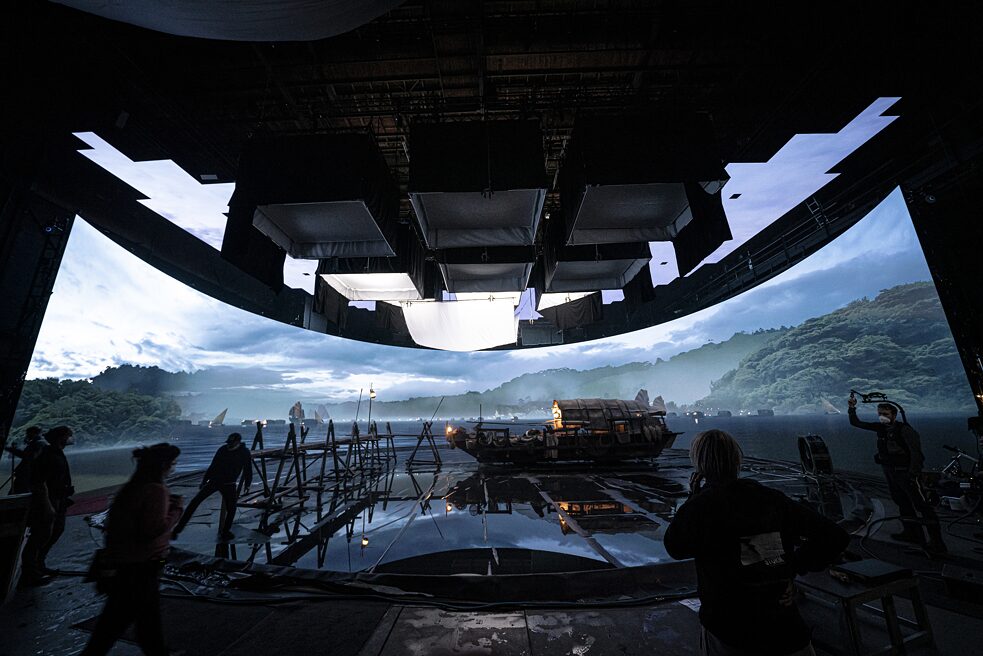 The optics are correspondingly impressive, but that is not the only reason to take a closer look. Look away for a moment and you’ll find 1899 has moved on to the next mystery: What is the shipping company, whose logo appears in very odd places, hiding? Why are the passengers tortured with nightmares and flashbacks? How reliable are their memories? Why did some passengers get letters with the message “What is lost will be found”? What do the triangle codes mean and who is sending them to the Kerberos? What is hidden in room 1011? Can scarab beetles open doors? Is there a murderer on board? And what are the links to the year 1899? Every episode contains innumerable twists as fates entwine and riddle follows riddle. There is so much more that could be said about 1899, but not without spoilers. But this much can be revealed: Kerberos holds exciting secrets well worth reading the subtitles for.

From screenplays to wild parties – Angela Zierow spent years in Los Angeles experiencing the everyday craziness of Hollywood life at first hand. Before turning her back on Hamburg and its bad weather, she worked as an editor on the German TV and movie magazine Cinema and wrote for lifestyle magazines such as Max, Galore, and Vanity Fair. These days, she shuttles between Los Angeles, Hamburg, and London, always in search of new film stories and the perfect post-movie cocktail, and is as convinced as ever that hers is the best job in the world.