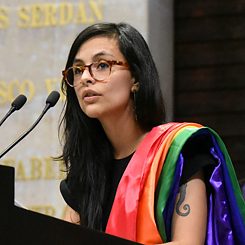 © Goethe-Institut Mexiko Lucía Riojas Martínez was born in Mexico City on February 1988. She is a feminist, a lesbian, a drummer and a federal deputy without party.

In 2010 she enrolled in the Universidad Iberoamericana (IBERO) to study Communications. It was then and there that she became involved in one of the most important political projects of her life: being a part of the student movement #YoSoy132.


In 2017, alongside other free men and women, she cofounded a citizen’s initiative called AHORA (Now). Their goal was to fight to return political power to common people by taking a stand against rampant impunity in the Mexican political class and contending electorally for legislative positions.

Since then, Lucía and her companions have worked towards ending Mexico’s pervasive corruption practices and the impunity with which the political class operates and towards peace-building in the current context of widespread violence, while simultaneously being a vocal defender of the rights of women, the LGBTTTI+ community, and against militarization in Mexico.