Ever since the 1988 Olympic Winter Games, Kananaskis Country has been known as a venue for alpine skiing competitions. However, while it still attracts numerous winter athletes from Germany, this winter paradise has a darker history. During the Second World War, prisoners of the Allied forces, including Germans, lived here in an internment camp in the middle of the Rocky Mountains.

Seebe Camp 130, Canada’s first internment camp, was founded on September 29th, 1939, overlooking Barrier Lake approximately 80km from Calgary. Initially, the camp was used to detain civilians, such as sailors from the German merchant navy and conscientious objectors. However, the United Kingdom soon began to send German prisoners of war to Canada, as they were worried these prisoners could present a significant danger in the case of a possible invasion of Great Britain. All in all, 34 000 German soldiers were interned in Canada during World War II. In June 1940, around 650 prisoners arrived at Seebe Camp 130, including some high-ranking officers. The majority were members of the German Africa Corps and had been captured by the British Eighth Army in North Africa. The camp near Seebe was one of four POW camps in Alberta; the other three were located in Medicine Hat (Camp 132), Ozada and Lethbridge (Camp 133), and Wainwright (Camp 135). Seebe Camp 130 was fitted with seven main watchtowers, all of them armed. In 1941, a tall, electric, chain-link fence was added for further security. The seven main watchtowers and two secondary watchtowers were manned around the clock by members of the Canadian Veterans Guard, which was composed of Canadian veterans from World War I. 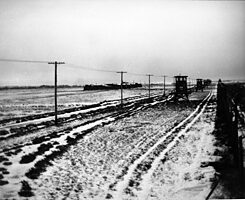 View from the guardtowers in the prisoner of war camp in Medicine Hat | © Image courtesy of Esplanade Archives, 0590.0017 When the camp first started operations, the 600 German merchant navy sailors interned there slept in military tents. Permanent barracks were later erected to house the prisoners. Soon the authorities started to worry about potential escape attempts, and they built an eighth main watchtower with a powerful searchlight after discovering an escape tunnel. However, there was never actually a successful escape attempt at Seebe Camp 130, even though it held almost 1000 German POWs. This may partly be because the prisoners were treated relatively well in comparison to the POWs in European camps. Although they did have to participate in forced labour, such as the construction of the Barrier Lake reservoir, there was also a billiards room and tennis courts at the camp, and in the winter they had skiing trips.

Today, Watchtower Number 8 can be found near the site of the old detention camp. After Seebe Camp 130 was closed at the end of WWII, the watchtower was rebuilt on McConnell Ridge and used as a lookout tower in case of fires. In 1984, however, the watchtower was brought back to the camp and set up close to its original location. It still lives there on what is now the site of the University of Calgary’s ecological and environmental field station. 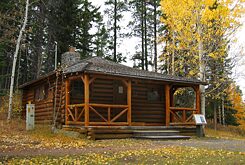 The Colonel's Cabin of Colonel Hugh de Norban Watson | © Historic Resources Management Branch, October 2003 The historic Colonel’s Cabin is also located in the immediate area. Colonel Hugh de Norban Watson, the commander of Seebe Camp 130, lived in this log cabin from 1939 to 1945. The cabin itself was built in 1936 and initially used as a forestry research station. Seebe Camp 130 was not the only internment camp in the Rocky Mountains, nor was it the largest in the province, but it is one of the few camps with buildings still in existence, and it can still be visited to this day.