Monika Dietl
“Shut up and dance”

For many in the early 90s, Monika Dietl (aka Moni D)’s radio show on SFB was a signpost into the still nascent Berlin techno scene.

Scroll down for excerpts from Monika Dietl's show "Big Beat".

In the early 90s, cell phones and the internet weren’t yet a thing. People called each other, stopped by to see each other spontaneously, or arranged to meet in advance. But how did work with event announcements that took place at short notice, or weren’t even necessarily intended for the general public? The most direct way was live radio shows, made by people in the scene for people in the scene. Monika Dietl (aka Moni D) was one of them. Her radio shows Big Beat and SFBeat for the station SFB (Sender Freies Berlin) were for many at the time the signpost for the young Berlin techno scene, especially in East Berlin, where her shows were often the only way to experience the new music before the fall of the Wall. Monika Dietl also became known for her slogan “Shut up and dance”.

Can you describe how a broadcast at SFB went back then?

Monika Dietl: We had real, analog turntables at the radio station, and they could only really do one thing 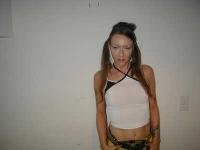 Monika Dietl | privat well: start up quickly, from 0 to 100 in a second. But you can’t mix with them. I’m by no means the greatest DJ, but that wouldn’t have worked at all. So you had to do a lot of tricks. That was really fun. In the end, you had 1000 little snippets, and they had to be mixed together somehow. You have to imagine it like this: I’m sitting in front of a big mixing console. In addition to that, I’ve got my mic, a jingle machine [Editor’s note: playback device for audio snippets/samples], CD and record players – and I have to operate them all at the same time. The stuff on tapes is done from the outside by the engineers, you can’t do that in the studio. In order to start up these tapes I had to send hand signals to the engineering room through the glass pane. To get around that, I had a lot of jingle machines made, with which I could cue in individual sounds myself. Going through the engineering department was just too slow.

So you did a lot yourself?

I did everything myself. Everything. There’s no help. Most radio people make it easy for themselves. They just sit down, moderate for a bit, and then let some records play that they’ve put together ten minutes beforehand. That works, too. But that’s just not my thing. I always thought it was stupid to do the same thing twice or to say the same thing. It did happen that a record played on two broadcasts if I thought it was really great. But in principle it was a brand new program every time. You just have to come up with something different every time.

So you had to pay attention to a lot of technical stuff...

Yes, radio stations also have these horrible things that are called compressors and limiters. When you play stuff with sub-bass, for example, the compressor starts up right when the bass comes in and pushes everything away. That’s exactly the point in the song where there's not much happening except bass, so you can just enjoy the subwoof. To the people listening on the radio, it sounded like a gap in the transmission. They thought I had made a mistake.

Did you buy the records yourself?

That was the main part of my work. You never got what you wanted, often not even at Hard Wax. On top of that, it all became a real rat race later on, because everybody wanted to be the first one with the new shit.

Did you realize that at some point you were a mouthpiece for the techno movement?

Yes, from the beginning on, because you already knew that we all listened to the same stuff. You knew each other from the parties and the moderation was full of little allusions that probably only the initiated understood. That was already a “we-feeling”.

What kind of allusion, for example?

How a certain party was or how long it had gone on for, for example. Or I gave a hint about the last party or the next one.

Can you remember any special guests?

I had many guests. But Aphex Twin was great. He was on my show relatively early in his career. An amazing figure. He’s as unrivaled as ever as a composer. He told me how he assembles his instruments and searches for parts in the dump, which he then uses to make his instruments or modify them. On top of that, the interview will always stay in my mind because it was very difficult. He was still like a little kid from Wales back then, also a little bit shy, but an absolute artist, an obsessive. With Derrick May, it was funny what happened in the show. He was desperate to convince me that I needed to have kids. Somehow we got on the topic of sex. And it came out in the process that I don’t want kids. He just said, “Oh no, you gotta have kids!” That was very funny.

we simply broke all the rules

Did you hear from other people in the scene that your show was a mouthpiece for techno?

Yes, of course. I heard that constantly. Even later on. Right after Radio 4U ended, I applied for a free radio frequency with a colleague. We thought we might have had a chance to start our own radio station. Then we applied to the Media Council. We had to submit 13 portfolios. That was an insane amount of work. Unfortunately, we didn’t get the contract. I was in San Francisco for a long time after that. A friend had invited me there. I basically got stuck there and was then also incredibly happy that I could lead a different life, that I could just be myself. So I totally forgot about everything. As I was back stranded in Berlin again ten years or so later because my visa in the U.S. had expired, I really noticed it like crazy. Even when I ordered a cab, people were like, “I know that voice!” When I went to a club, people would say, “What, the Monika Dietl? That’s you?” All the time! I had no idea what was happening. Even people like Modeselektor recognized me, or the incredible Ulrich Schnauss. That really blew my mind because he’s a great musician and I was a big fan of his. He told me that he started making music because of me.

You guys were right at the source when it came to new records. Did you also have parties on your shows with the guests?

You can’t do that at SFB. You can’t get in without a badge. You need a visitor badge. Nevertheless, guests often came with their entourage. In the last show, we simply broke all the rules. The studio was full of friends of mine, like Kid Paul and Ellen Allien. We went a little overboard and got rowdy. That was awesome. We really celebrated the fact that it was the last show and were all happy that a new era was beginning now!

Did the people from Detroit know about the show?

Yes, of course, they probably knew about the show through Tresor and I even interviewed some of them. Later, Derrick May told me at a rave in Oakland how important he thought the show was. This Berlin-Detroit connection was born out of a great mutual respect and then grew organically.

© All clips used with kind permission of SFB/RBB.