is an author and illustrator. Their work has been presented at the Musée National des Beaux-Arts de Québec in April 2019 for the exhibition Fugitifs! and at the Québec en toutes lettres festival in October 2019 for the exhibition Ceci n'est pas une Pub. Cassendo works closely with the Espace de la Diversité, a non-profit organization whose goal is to give more influence and visibility to the work of authors from various ethnic communities. 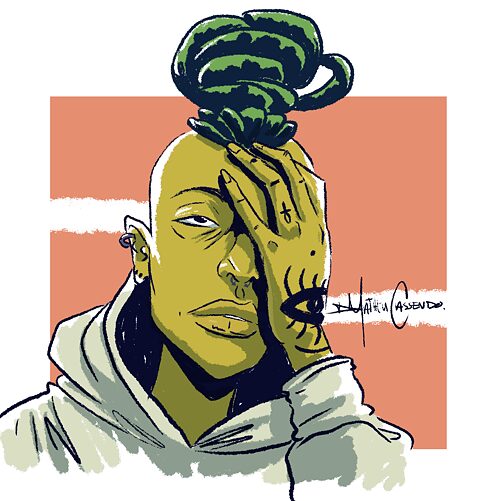 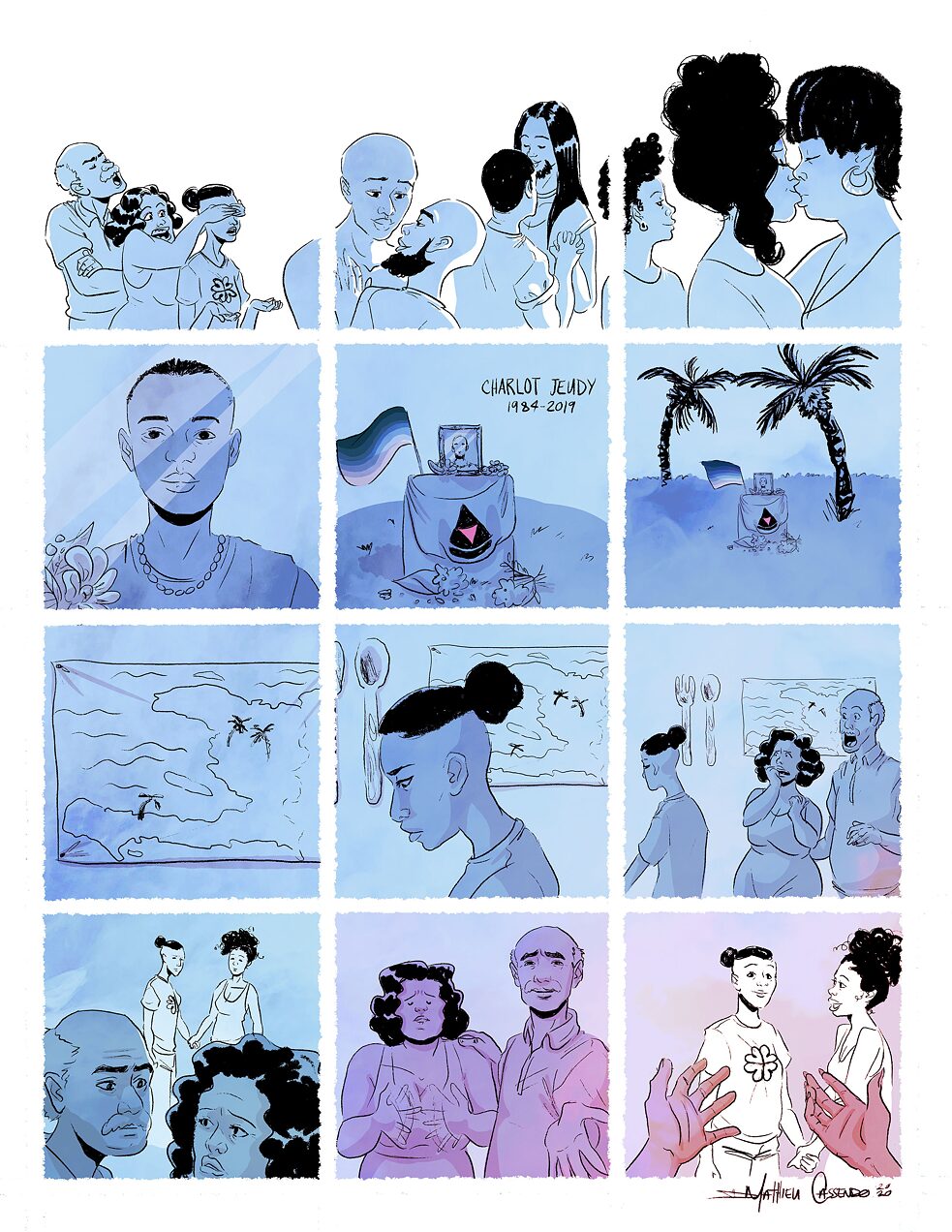 Living through a conflict ... brings great peace of mind to the soul.

This page is inspired by my own experiences. Being lesbian and black is not easy, even in a Western society. The lies about homosexuality followed my parents when they immigrated to Canada and they told them to me from a very young age. Without knowing it, they were against the very idea of my existence while at the same time contributing to my livelihood.

When they learned of my sexual orientation, a clash occurred. A lot of misunderstanding and sadness. My coming out was different from the one in this comic. But in a way, I wanted to show the stages of the process that people like my parents go through, ranging from the oppression present in the countries they have left, to the acceptance of their own child.

To me, reconciliation means personal growth. Living through a conflict in such a way that in the end all parties can get along with each other brings great peace of mind to the soul. The key word is "get along". The two groups do not necessarily understand or share the same views.
At the beginning of my life, I understood that if someone disagreed with me, it was because they were against me.
The difference had to be taken very strongly and perceived as disobedience to the social order. In this context, differences of opinion are seen as a personal attack.

I have the impression that our urge to prove ourselves right is often at the expense of others, but also at the expense of our own mental health. It’s really a shame. Questioning one's own thought patterns can lead to considerations such as: Why do I worry about X? Do the beliefs I perpetuate cause harm or progress? I want to live in a world of acceptance where critical thinking is encouraged, and I believe that to do so, it is essential to be able to listen to yourself, to determine which ideas are outdated, and to allow yourself to grow.

When I want to communicate a message in a comic strip, I approach the project as if it were a solution to a problem. How can you make a difficult topic accessible and convey a certain lightness, allowing for aesthetics and humour? My aim is to capture the necessary information on a single sheet of paper without saying too much. I consider comics which take the reader by the hand to be boring (I allow myself to say this because I have done it often in the past).

First I have a rough idea in mind. In this case, I thought of the Haitian LGBTG+ activist Charlot Jeudy, who was killed in November 2019. It was important to talk about his untimely death in order to outline the context of my parents' country. Plus, the page had to end with the acceptance of the parents.
I wrote several different texts. I’ve come to the conclusion that trial and error is the best way to work. In the beginning I had long paragraphs, which became more compressed in each new version. In the end it turned out that the final version was most effective without any text at all.

I switched to the computer to do the layout, where I did my cutting (the pre-draft, if you want). Because it’s just one page, I wanted it to look pretty even from a distance. That's why I made the first row without boxes to support the characters. The final steps were: the advanced draft and the final version.

It is tricky to talk about homophobia when you come from a so-called Third World country. It can quickly turn to racism: the idea that if a good portion of the population and government encourage homophobia, it is because they are amoral compared to the people of North America and Europe. This idea somehow sticks despite the attacks and injustices against white LGBTQ+ brothers and sisters that continue to happen here.
This work is not intended as an attack on a specific country and its anti-homosexual measures. Rather, it is about the way in which the relationship between migrant parents and their homosexual children has improved.

Dimani Mathieu Cassendo is an author and illustrator. In September 2016, the Festival des Films Black de Montréal invited them to present their paintings as part of the exhibition Black Fem'Art. Two months later they released their first science fiction album: La Petite Suceuse. They went back to web comics with La BD Annuelle sur le Racisme (2017), some excerpts of which are published in a brochure of the magazine Droits et Libertés. Their illustrations are exhibited at the Maison d'Haïti in March 2018 on the occasion of the anti-racism gala.

Ironically, one of their posters depicting a smiling black character which was drawn for the 2018 Québec Solidaire election campaign sparked controversy about anti-black racism (hihi).

They released their first solo exhibition Le jour où j'ai arrêté de faire semblant in April 2018. The latter is about the vortex in which negritude, homosexuality and politics directed against the self whirl together. Their work is also exhibited at the Musée National des Beaux-Arts de Québec in April 2019 for the exhibition Fugitifs! and at the Québec en toutes lettres festival in October 2019 for the exhibition Ceci n'est pas une Pub.