Toronto’s Fiona Smyth is a feminist painter, illustrator, cartoonist, and educator.
Fiona was inducted into the Doug Wright Awards’ Giants Of The North Canadian Cartoonist Hall Of Fame alongside Alootook Ipellie in May 2019. She teaches illustration and cartooning at OCADU (Ontario College of Art & Design University) and the AGO (Art Gallery of Ontario). 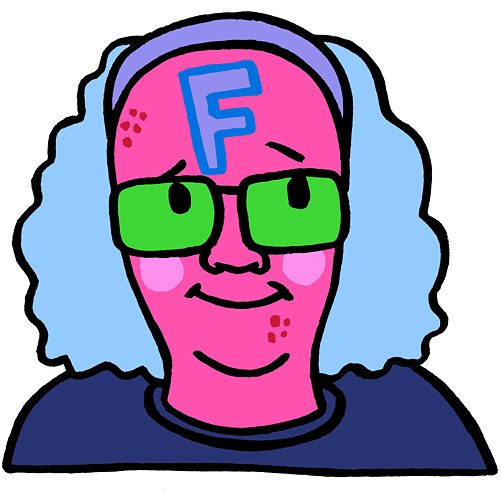 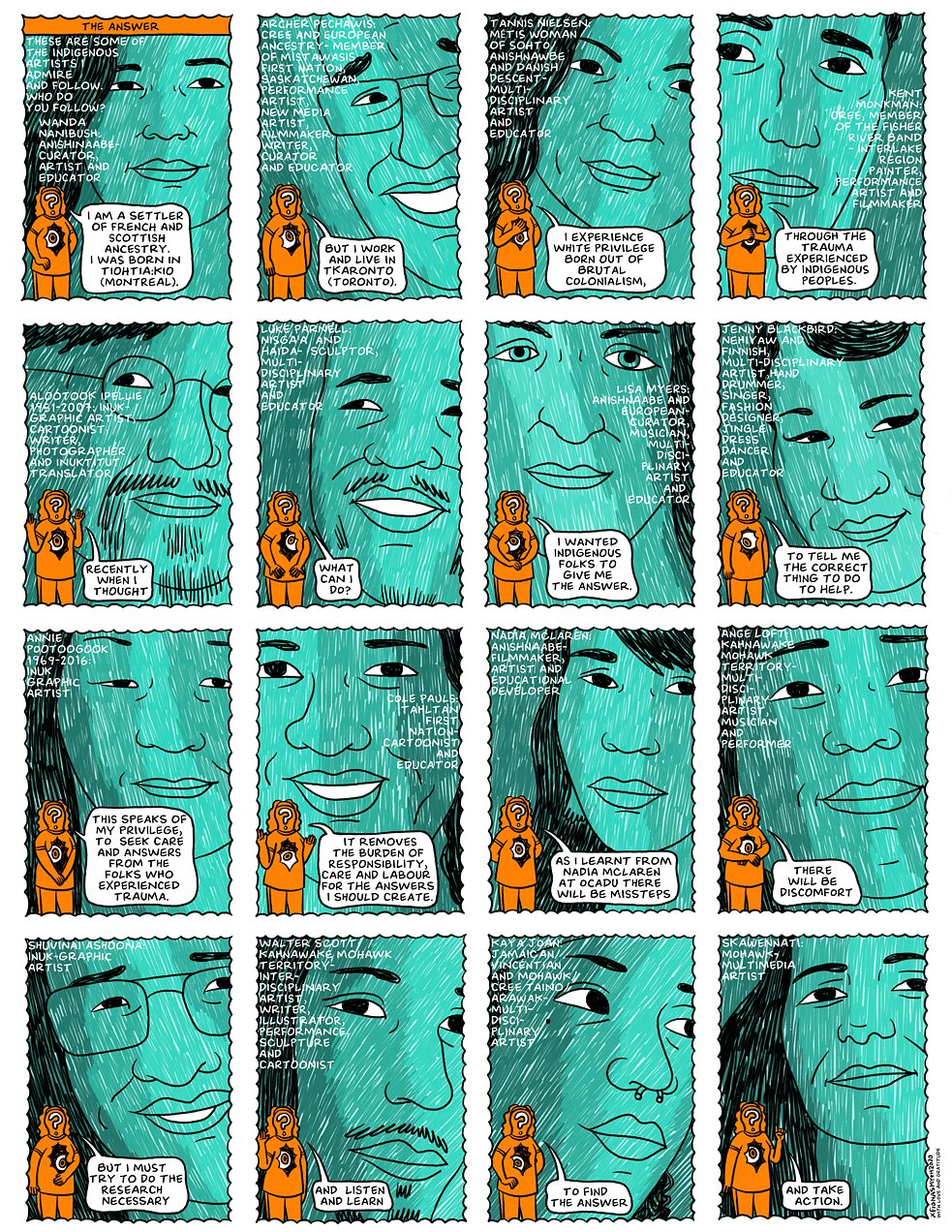 ...a previous equality and equilibrium which never existed.

I was initially overwhelmed with how to approach this work. Reconciliation is not easy to discuss, even just the meaning of the word is hugely problematic. It suggests a previous equality and equilibrium which never existed.

Thematically I wanted to discuss that difficulty and how there is no singular answer and that each of us, especially as settlers, must find a way. I also wanted to juxtapose the import of the Indigenous artists in the conversation, to take the focus off myself in an effort to bend the autobiographical cartooning norm of severe internal introspection- the lonesome thinker/sufferer. I wanted to celebrate some of the Indigenous artists who have affected my life though their art, to let them take visual prominence in the strip.

It’s an important theme to me as a Canadian/settler and as an artist whose personal work is about trauma and a how the body reveals its history even without speaking it. Canada considers itself a moral and ethical leader in the world but look to our treatment of Indigenous peoples and you will see the hypocrisy and lies. The last residential school closed in 1996. 1996!

I usually look at the format first- set up a grid and then work within or beyond the original constraint. For this strip I created a very tight grid and imagined the number of artists I would include. At first the opening and closing panels had different images but then I figured I could include two more artists and conceptually that made more sense. Other solutions were completing the last panel with me holding a sign reading “and take action” but that felt superficial, to be honest my actions are in the classroom or in painting or a comic. I also thought of portraying myself working on the comic within the last panel but that would suggest this comic was the answer, which it is not.

I wrote a script and finessed it along the way even in the last iterations of the comic. I drew and coloured in Procreate and then added lettering in Photoshop. I have been working more digitally in the last few years and I’m new to Procreate in the last 6 months.

Check out the artists included in The Answer, some you may know already.

The Artists From The Answer

Toronto’s Fiona Smyth is a feminist painter, illustrator, cartoonist, and educator. She collaborated with writer and sex educator Cory Silverberg on the Kickstarter funded picture book What Makes A Baby in 2012, re-released by Seven Stories Press in 2013. The second book in the series Sex Is A Funny Word was named a 2016 ALA Stonewall Book Award Honor book and won the 2016 Norma Fleck Award for Canadian Children’s Non-Fiction. A collection of her monthly comic CHEEZ from Exclaim Magazine was published by Pedlar Press in 2001 and her first graphic novel The Never Weres was published by Annick Press in 2011.

Fiona collaborated with writer Mariko Tamaki for her stories in Secret Loves of Geek Girls and Theater of Terror - Revenge of the Queers, and cartoonist Ron Rege Jr. on Perish Plains Volume 4 for Perish Publishing. Her comics can also be found in Resist #1 and 2, edited by Francoise Mouly and Nadja Spiegelman, Mark Laliberte’s 4PANEL 2, and a thirty year collection of her comics titled Somnambulance published by Koyama Press in 2018.

Fiona was inducted into the Doug Wright Awards’ Giants Of The North Canadian Cartoonist Hall Of Fame alongside Alootook Ipellie in May 2019. She teaches illustration and cartooning at OCADU (Ontario College of Art & Design University) and the AGO (Art Gallery of Ontario).