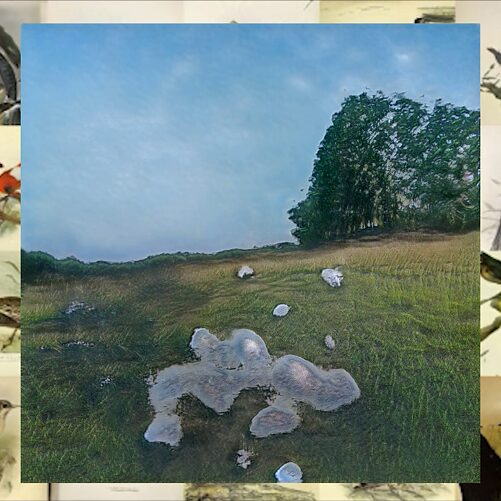 New Nature Vitrines is an exploration of all that lies - unknowably, irreverently, monstrously - beyond the human notion of “nature”.

We still do not know one thousandth of one percent of what nature has revealed to us.

The series assembles audiovisual and sound works by contemporary artists, filmmakers, technologists, and scientists, foregrounding stories and scales that interrogate the inherent anthropocentrism of images, often by riffing on the codes and conventions of nature films, or subverting them altogether.

The artists, based in Germany, Canada, Mexico, and the United States, propose intricate soundscapes, airborne and microscopic perspectives, images imprinted by lichen, dirt, fur, and bacteria. Their works excavate complex biological, interspecies, and computational systems, all in a constant state of becoming, flickering with realities beyond our consciousness and invoking idiosyncratic reinventions of our relationship to the natural world.

The works are presented in the vitrines of the Goethe-Institut Montreal from November 16 to December 6, as well as exhibition spaces in three different Berlin neighborhoods – Berlin Weekly (Mitte), feldfünf (Kreuzberg), and goeben berlin (Schöneberg) - and Goethe-Institut New-York (December 15, 2020 until January 8, 2021).

Their placement in windows across the city diverts the restrictions of our COVID times to present decentralised and unexpected, emotional and visceral encounters with nature, springing forth from the quotidian facades of our cities.

The public is able to watch the moving image works from outside all venues. Stereo sync audio is made accessible for the Berlin venues through the visitors’ smartphones. More info here: www.newnature.live

In Berlin, selected works by Jenna Sutela are featured at feldfünf; Joan Jonas’ “Waltz” is presented separately to the works in the vitrines at goeben berlin.

New Nature is a series of encounters over the course of 2020 between contemporary artists, filmmakers, immersive and VR creators, technologists, and climate scientists from Germany, Canada, the US, and Mexico. The project is an initiative by the Goethe-Institut Montreal, realized with the support of the Federal Foreign Office of Germany, in partnership with the National Film Board of Canada, Centre Phi, Milieux Institute at Concordia University, Museum of the Moving Image, Massive Science, XR HUB Bavaria, UnionDocs Center for Documentary Art and Retune - Creative Technology Platform.

This otherworldly short film takes a deep dive into lichen, a species that confounds scientists to this day. Lichen offers us a look at this remarkable life form and asks what we might learn from it. Ancient and diverse, both an individual and a community, lichens can live in the most extreme environments, including outer space. This meditative film bridges science and philosophy, and the words of lichenologist Trevor Goward illuminate the terrain in poetic and thought-provoking ways.

Parallel I opens up a history of styles in computer graphics. The first games of the 1980s consisted of only horizontal and vertical lines. This abstraction was seen as a failing, and today representations are oriented towards photo-realism.

Courtesy of the Artist © Suzanne Kite

(stones make birds make stones)
In response to Martha Tuttle’s installation, A stone that thinks of Enceladus. StyleGAN manipulations show photographs of stones trying to reassemble birds. Sounds include recordings of a Hudson River estuary, the river lapping at the feet of poet, the Taos hum, a Jacob's Ladder electrical device, the rehearsal of a conch shell sextet, a harp excerpt from a previous work, and the artist's voice.

Using various levels of imagery, the essay film Europium weaves a narrative around the rare earth element europium; named after the European continent, the material will be culled from the ocean floor to ensure brilliant color images on smartphone displays, and to guarantee the authenticity of euro bank notes. The film describes this seemingly mundane fact as a return and repetition of history, exposing the invisible ghosts of the past as they appear in the modern objects of our lives.

Parallel III seeks out the boundaries of the game worlds and the nature of the objects. It emerges that many game worlds take the form of discs floating in the universe – reminiscent of pre-Hellenistic conceptions of the world. The worlds have an apron and a backdrop, like theatre stages, and the things in these games have no real existence. Each of their properties must be separately constructed and assigned to them.

The video work reflects the relationship people have with their environment and questions the genre conventions of the classic nature documentary. The animals looking directly into the camera, which is usually forbidden in nature documentaries, is almost aimed at and the animal is established as a part of the recipient as well as their counterpart. What starts as a landscape and nature documentary turns into an experimental essay film that transcends genre boundaries, and thus undermines their predictable narratives. A hitherto familiar environment takes on strange characteristics and oscillates between stagnation and movement, realism and hypnosis, naturalness and artificiality.

Lunar Pond is part of an audiovisual series about lunar cycles and rhythms in an attempt to evoke, integrate and develop the mythical presence of the Aztec lunar goddess Coyolxauhqui, thus evoking the eroded contemporary landscape of our time.

A monster film without monsters. Inspired by the existence of taxonomies of monsters at the heart of Early Modern European science, the film explores and reinterprets a way of seeing the natural world that is almost impossible to imagine from today’s vantage point. Early Modern naturalists were guided by a logic in which scientific truths were discovered through visual analogy. The word “monster” comes from the Latin “monstrare”, meaning to show, to reveal, to demonstrate. A Demonstration picks up on these themes in a poetic exploration of the boundaries of sight and the metamorphosis of form.

A fracture runs through the image. Hydraulic pliers and drills ready the filaments of Capital for the great industrial ordeal. The strata, black holes, begin to crack. There is a battle: who has stolen the earth?

Inhumanities is a projection mapping video that uses the form of technological abstraction to explore Black feminist ecological responses to narratives on the Anthropocene. Via abstraction, these videos ask how the Human is constituted by nature (and vice versa), towards planetary repair.

Holobiont considers the idea of embodied cognition on a planetary scale, featuring a zoom from outer space to inside the gut. It documents Planetary Protection rituals at the European Space Agency and explores extremophilic bacteria in fermented foods as possible distributors of life between the stars. Bacillus subtilis, the nattō bacterium, plays a leading role. The term 'holobiont' stands for an entity made of many species, all inseparably linked in their ecology and evolution.

The story is: we love the thing, we take the thing and move it to a different place, so it will be closer to us and we can look at it, and then we kill it. We have made a movie of its death, so we can watch it again and again, faster, slower, backwards.

Nam - Gut (the microbial breakdown of language) presents a homebrew computer operated by a symbiotic colony of bacteria and yeast and producing a new kind of language. A text about code laws and the gut brain, inspired by an ancient Sumerian incantation, is processed by tea,sugar,acetobacter, saccharomyces, brettanomyces, lactobacillus,pediococcus, gluconacetobacter kombuchae,zygosaccharomyces kombuchaensis, and Jumbo.

nimiia cétiï (2018) is an audiovisual work by Jenna Sutela using machine learning and the movement of Bacillus subtilis nattō, to generate a new written and spoken language. The machine, in this project, is a medium, channeling messages from entities that usually cannot speak.