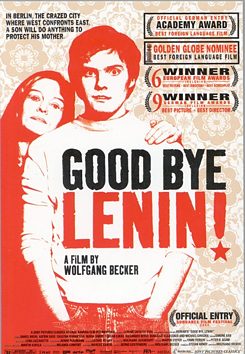 October 1989. In East Berlin, Alex’ mother, a staunch socialist, falls into a coma only to wake up after the fall of the Berlin Wall. Will her weak heart withstand the triumph of capitalism in her beloved country? To save his mother, Alex transforms the family apartment into an island of the past, a kind of socialist museum where his mother is lovingly duped into believing that nothing has changed. What begins as a little white lie gets out of hand as mum wants to watch TV and even leaves her bed one day…

In a wonderful, touching and comic manner, the multi-award-winning GOOD BYE, LENIN! tells the story of how a loving son tries to move mountains to restore his mother to health – and keep her in the belief that Lenin really did win after all.

Introduced by Prof. Barbara Schmenk, UWaterloo Centre for German Studies, where she works on language, power and gender.

“Wolfgang Becker's film about one man's attempt to make history stand still is a tragi-comic journey into political upheaval and personal worries. Taking wry pot-shots at the monolithic ideologies of Communism and Capitalism, Becker turns this family's crisis into a symbol of Germany's own attempt to heal old wounds and rebuild itself.” – BBC

“Funny but not a comedy, serious but never overbearing, emotional in an engaging and bittersweet way, Good Bye, Lenin! is a wonderful film unto itself about a world unto itself.” – Los Angeles Times

“A romantic comedy so smart and sweetly mature, it's liberating.” – TIME

Director Wolfgang Becker, born in 1954, studied German, History and American Studies at the Free University Berlin, then worked at a sound studio and studied at the German Film & Television Academy (dffb). His graduation film BUTTERFLIES won the Student Academy Award in 1988, the Golden Leopard at Locarno and the Ophüls Festival Saarbrücken. His comedy LIFE IS ALL YOU GET (1997) was in competition at the Berlinale before GOOD BYE, LENIN! won the Berlinale Blue Angel Award for Best European Film 2003. GOOD BYE, LENIN! launched actor Daniel Brühl’s international career; they reunited in Becker’s most recent cinema film ME AND KAMINSKI (2015).


Part of Germany @ Canada 2017
Partners from Immigration to Innovation