Film Screening "SCHULTZE GETS THE BLUES" 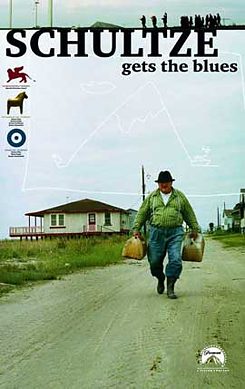 SCHULTZE GETS THE BLUES (Germany, 2003, 114 min, 35mm), directed by Michael Schorr, with Horst Krause, Harald Warmbrunn, and others

SCHULTZE GETS THE BLUES tells the story of a man who has spent his whole life in a small town in Sachsen-Anhalt in East Germany. Schultze's life, divided between work and the pub, allotment garden, folk music and fishing, is rudely interrupted when he and his buddies Manfred and Jürgen lose their jobs. As boredom sets in and maintaining the daily routine deteriorates into a farce, Schultze discovers a life on the other side of the hill.

From his polka-powered accordion, the amateur musician coaxes the fiery zydeco music of the US South, which threatens to disrupt the respectable anniversary celebration of his local music club. Faced with the choice of sliding back into the old ways or ending up as the local freak, Schultze makes a decision which will take him deep into the swamps and bayous of Louisiana ... and back again.

“How he switches off the light, but then returns to the kitchen, turns on the radio, searches for the station and moves his ear towards the loudspeaker and finally takes his accordion to try to play the blues – this is one of the greatest scenes that German film has created in recent years!” – Berliner Zeitung

“A genuinely endearing soul, Schultze earns our admiration not because he indulges himself in a senior citizen's lark but because his journey, like our hero himself, has depths we hadn't suspected.” – San Francisco Chronicle

“In this disarmingly bittersweet comedy about a middle-aged polka accordionist who gets a new lease on life, accomplished first-time writer director Schorr recalls the deadpan drollery of Kaurismaki.” – Variety


Michael Schorr was born in 1965 in Landau, West Germany. After studying Philosophy, Music and Film, he enrolled at the Konrad Wolf Academy of Film & Television in Potsdam-Babelsberg to study directing. His films include the documentaries HERBSTEN (1997), FISCH, MEER, BLUES (1998), LEBEN 1,2,3 (2000), and FERNER LIEFEN (2002), as well as the feature films SCHULTZE GETS THE BLUES (2003) and SCHRÖDERS WUNDERBARE WELT (2006).