Andrianus “Oetjoe” Merdhi (Sumte/Niedersachsen) was one of the five Indonesian filmmakers who spent around three weeks in Germany to stay and work in a German environment. He observed and eventually produced a film without the help of a crew – except for a student chosen by HFBK Hamburg who accompanied him during the whole process.The topic, the story, the angle, the design and the production plan were all decided upon independently at the location of the shoot.

You studied in Germany, came back to Indonesia as an engineer and then worked in Papua as a lecturer. Could you tell us more about your journey that led you to be interested in becoming a documentary filmmaker?

When I was still in senior high school, I became interested in photo journalism. I think that there is a resemblance tot he pattern of documentary films. Meanwhile, BJ Habibie, the development of airplanes and the paradigm of Germany as a country known for its progress in technology all inspired me to study technology in Germany. However, along the way I realized that the field of technology wasn’t something that would make me happy. I decided to just finish my studies but upon my return to Indonesia, I actively joined an educational program that was subsidized by Germany.

Through FORUM KOPI, a forum for Indonesian students in Germany during college, I began to learn more about the region of Papua. This made me decide to move there and work as a lecturer in a remote area in Papua that is still isolated. It was there that I began to pursue photo journalism again and continued to make a documentary film. On the other hand, the interesting part of a documentary is that it motivates us to learn and broaden our horizon, to encounter other cultures, that it challenges us to communicate outside our usual social sphere and of course, that it gives back to others with the aim to nurture their imagination and emotions.

What were the driving factors behind your decision to participate in the project 5 Islands/ 5 Villages?

Pepe Danquart and his works became the most important factor for me, and the fact that he was involved in the filmmaking process. Other factors were the inspiration of my own experience and having been connected with issues concerning refugees several times, as well as the chance to have my film included in a festival – therefore, when HFBK and Goethe-Institut organized a workship, I thought that it would be a good opportunity to give it a try and improbe my own work.

In addition, the Goethe-Institut has always played an active role in the field of film, such as a film’s preparation or film screenings, and it also has its own audience. These are the reasons why I signed up for this project.

How did the preparation process for your film look like?

When making a documentary film, the most important factor is research. Without proper research, we lose direction. The result of my research included the information that the village of Sumte as a shooting location is a remote and desolate area.
Without prior research, I couldn’t have imagined what could be done in an area like that. I had three weeks time; one week I spent in Hamburg, and the other two at the shooting location in Sumte. During the filming process, I was helped by an HFBK student majoring in film. In addition, I also had to prepare a synopsis about making this film. Rekam gambar | © Andrianus Oetjoe Who chose the shooting location? Could you describe the process of the development of the film?
At the end of the workshop, Pepe Danquart asked me what I would film if I was to return to Germany. My answer was quite personal: I said I’d film something based on my personal, social experience. In 2015 and 2016, Germany faced a migration crisis. Therefore, I thought I could make a film about the way German people see the refugees. My friends, who have often been involved in refugee issues, supported my idea. Maybe there are already many flms that deal with the topic of refugees, but to show it from a German perspective seemed to be interesting. And eventually, I got Sumte as shooting location.

The days in Hamburg were used for discussions, brainstorming, input and the preparation process. I needed to be very thorough about the refuguees issue because it is quite a sensitive topic. In addition, we prepared non-technical issues, for instance what to do when the sources in the film refused to be interviewed and similar things. Basically, our counterparts from HFBK gave us feedback, but didn’t contribute their own ideas. We were given complete freedom to develop our own ideas to make our film.

Did you face any challenges when you were making the film?

There were some, including the students who accompanied us during the process of filming. Of course, on one hand it gave me the chance to have deeper discussions about the film, but one the other hand, this could also influence the process of making the film. Communicating with the people also wasn’t something trivial. Only after four days we could decide and to proceed to the next step and determined an appropriate source for film. Even though I can speak the German language, the communication with our protagonists proved to be rocky as they seemed to be more comfortable speaking to people they are familiar with. At the beginning of the process, I could feel this quite strongly, but towards the end, we handled it much better. Besides that, the Internet reception in Sumte was quite poor, and therefore it was difficult to obtain access to the Internet. This meant that our communication with the tutors in Hamburg was quite troublesome.

Sumte itself is desolate, isolated, located in the former border area between West and East Germany, and used to be a shelter for refugees. What is your viewpoint of this?

In the film, the refugee actually only plays a minor part, as he doesn’t appear that often. During the editing process, I realized that this was a place where people come and go. There are guest workers from Romania, there are women who go to the office; they come and go back again. Generally speaking, that’s the way it is. I also tried not to offer any conclusions, only from the perspective of being a witness. It is much better to open the room for questions. The theme of remoteness and desolation is what I want to convey visually. The audience doesn’t need to come to Sumte to feel it. Therefore, the film puts a stronger emphasis on atmosphere. 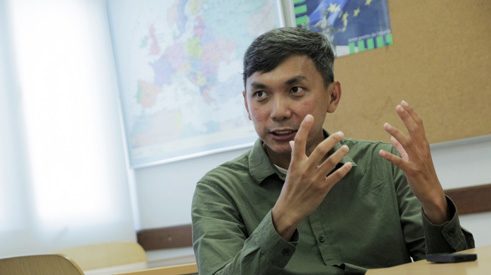 Andrianus Oetjoe | © Adin Amiruddin
Is there a certain message that you would like to convey to the audience through this film?

I am trying to communicate with the audience through the film. It was a challenge for me to convey something to an Indonesian audience that may or may not have had a taste of Germany – and Sumte in particular – yet. .

It would be even more rewarding if the Indonesian audience could get valuable information from this film besides enjoying the location and the natural surroundings that are so different from what we know in Indonesia. It is different for the German audience; I would already be satisfied if they can get something out of this film, experience and witness something – and regard it as something that is part of the current situation in Germany.

I will try to include the film in festivals that deal with issues like migrants and refugees. Perhaps we will organize to screen the films in Hamburg.

I hope this film can also be somewhat of an antidote to the current situation in Jakarta – like in the film, in terms of human beauty, there is a Rainy who fights for the place he lives in, pays attention to the natural environment, the surrounding communities and cares about the humanity that he feels.

From a filmmaker’s perspective, this film also strives to return to the essence, without having to see where we are coming from or which nationality we have – maybe that can be captured as the message of the film. In my opinion, one of the goals of a documentary filmmaker is to find out how to break the clichés. I have always been fascinated by Adorno’s theory: “Art should be free from ideology, it is enough for it to bear witness of what happened. It has to be true.”