When Mohamed Khair Tarabulsi boarded the plane to Munich in the summer of 1972, he was at his athletic peak. He had spent the past several weeks building up his strength and endurance and working on his technique.

The athlete, born in 1950 in Beirut, had already won a number of weightlifting tournaments in Lebanon, Syria and Turkey. The only thing that worried him was the weather in Germany and how it would affect his performance. Mohamed Tarabulsi was afraid of catching a cold.

The aeroplane with 19 Lebanese athletes on board landed smoothly at Riem, Munich’s former airport, on 14 August 1972. There were no boarding bridges back then. Mohamed and his companions left the plane on foot and headed for the terminal building that had been specially upgraded for the Olympic Games, where, after a routine passport and luggage check, he was given an athlete’s welcome by local volunteers. Mohamed Khair Tarabulsi was relieved: the sun was shining and a pleasant 25 degrees Celsius made the fear of a damp and chilly Germany melt away.

Along with his fellow delegation members from Lebanon, he moved into one of the two newly constructed olympic villages that would be a temporary home to more than 13,000 athletes from 1 August to 18 September 1972. The new buildings were outfitted with every imaginable luxury available in the 1970s. A note from the Olympic archives contains a message that could have been written by Mohamed Tarabulsi: Peaceful, lots of green, running cold and especially hot water in the showers, modern kitchens, colour TVs and short distances to training and sports facilities.

Mohamed Tarabulsi was young and ambitious. On the first day after his arrival he already resumed his training. At the opening ceremony on 26 August 1972, he proudly marched into the Olympic Stadium in Munich as part of the Lebanese team. 62,000 people cheered for the athletes. The self-supporting high-arched canopy of the Munich stadium was even more impressive when viewed from the green in the centre. The day before, Mohamed Tarabulsi had joined weightlifters from other countries to admire the Olympic grounds from above, from the observation platform of Munich’s television tower, another recent construction project.

The atmosphere at the opening ceremony was breathtaking even though Mohamed Tarabulsi hardly understood any of the German-language announcements, but the stadium announcer Joachim Fuchsberger also provided information in English and French. The athletes’ entry march went on for 90 minutes, accompanied by a musical medley of European, Chinese, Arabic, African and South American tunes – played by the big band led by Kurt Edelhagen, who was famous at the time. The games were officially opened by former West German President Gustav Heinemann, the president of the organising committee Willi Daume and IOC President Avery Brundage. The youth welcoming address was given by 3,500 schoolchildren from Munich, accompanied by the Tölz Boys’ Choir. The opening ceremony had a ‘flower power’ theme and was perfectly produced for colour television, which had been introduced in Germany at the beginning of the 1970s. After the raising of the Olympic flag and the lighting of the Olympic flame, 5,000 peace doves flew into the sky to spread the message of harmonic and spectacular games around the world.

The weightlifting competitions began the day after the opening ceremony. A total of 188 athletes took part, competing in nine weight classes.  Mohamed Tarabulsi had observed his opponents closely: he had paid close attention to their style, how they approached the weights, their breathing technique and the physical potential in their arms, abdomen and legs. He wanted to see how strong the other athletes were in their snatch, clean and jerk, the three traditional techniques in weightlifting. 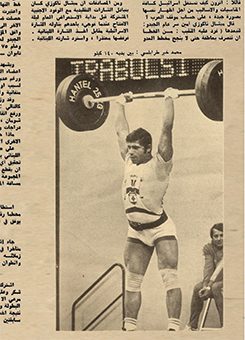 Winning the silver medal – news in AL-Hawadeth from September 8th, 1972 | Image courtesy of UMAM Documentation and Research On 30 August 1972, Mohamed Tarabulsi achieved a sensational feat. Lifting a total of 472.5 kilos, he won the middleweight silver medal for Lebanon. He surpassed the Italian Anselmo Silvino by 2.5 kilos and was only beaten by the Bulgarian Yordan Bikov, who managed to lift an additional 12.5 kilos. Mohamed Tarabulsi only just fell short of winning a gold medal. He attempted a snatch of 146.5 kilos, which would have set a new world record, but failed, so the attempt didn’t count in the official scoring.

The joyful reaction to Mohamed Taraboulsi’s victory was beyond words. The handful of journalists who had flown in from Lebanon were ecstatic. For two days, the young athlete was featured on the front page of every newspaper and was the main story on state television. In 1952, the country had won two medals, but ever since, the Lebanese athletes had returned home empty-handed. Winning silver in Munich was balm for the Lebanese soul. On the evening of his success, he celebrated with a small group of his coaches and staff.  Mohamed Tarabulsi walked around the Olympic Village proudly bearing his medal and was congratulated by athletes from all over the world.

All of a sudden, the relaxed atmosphere, the joy over his success came to an abrupt end: on 5 September 1972, PLO fighters took 11 members of the Israeli delegation hostage in the Olympic Village. In exchange for freeing the hostages, they demanded the release of 232 Palestinians from prison in Israel. Another demand was freedom for the German terrorists Andreas Baader and Ulrike Meinhof as well as the Japanese terrorist Kōzō Okamoto. At first, the games continued despite the hostage situation, but after a number of protests by other athletes and public outcry, they were suspended. The Israeli government, who were brought in immediately, refused any form of negotiations. During a failed rescue attempt by German security forces, all the hostages, five of the terrorists and a police officer were killed.

The athletes’ living quarters became a high-security area. The games were interrupted, the grounds were sealed hermetically, some athletes were evacuated. There were snipers on the roofs of all the houses. Tanks were called in. How did the PLO fighters get onto the grounds unnoticed? Did they have help from inside the Olympic village? Everyone was under suspicion, including Mohamed Tarabulsi. Had Lebanese athletes helped the PLO fighters? Mohamed Tarabulsi was caught up in the dragnet investigation by the Munich police and German domestic security. For a while now, there had been intelligence linking German terrorists of the Red Army Faction, RAF, to Lebanon. Had the athletes from Lebanon been given any money or simply information, names and addresses to pass on to German RAF fighters?

Mohamed Tarabulsi was quickly cleared of any suspicions after a brief interrogation by the German police. Tarabulsi put his heart and soul into being an athlete and was just happy to have won a medal. He had never been interested in political activities. But he was afraid that the games would be brought to an end and that his success in Munich would always be overshadowed by terrorism instead of being remembered for the sport.

But the people responsible in Munich and at the IOC refused to let the 1972 Olympic Games be blackmailed by terrorists. After the bloody end to the hostage situation, the games remained suspended for another day. After a memorial ceremony in the Olympic Stadium, IOC President Avery Brundage recommenced them by declaring, “The games must go on!”.

The atmosphere in the Olympic village turned positive again. Sport and athletic competition, international friendship and the Olympic idea won out over terror and political extremism. Mohamed Tarabulsi also always believed in the power of sports to bring people together.

The closing ceremony for the Olympic Games was held on 11 September 1972, a day later than originally planned. The athletes and their staff marched into the stadium bearing their flags and lined up in the inner green behind the flags. The atmospheric lighting in the stadium dimmed. Avery Brundage stepped onto the stage. It was the last official appearance by the IOC President who had been in office since 1952 and was set to hand over the reins to the Irishman Lord Killanin. As his final official act, Avery Brundage declared the games in Munich to be over. Many of the athletes had tears in their eyes. The atmosphere was very emotional. Avery Brundage then addressed the audience in German:

Dear people of Munich, your warm and kind hospitality has moved us deeply. We celebrated days of brilliant joy together, and we suffered through the difficult hours of the deepest darkness united as one. The time has come to say goodbye. We shall return home and so we bid you all: Farewell!

After minutes of applause by the athletes and the audience, the lights went out. 85-year-old Avery Brundage returned to the VIP stand. The stadium’s display panel bore the message “Thank you, Avery Brundage”. The Olympic flame was the only source of light at that moment. After a moment of silence, the Olympic flame went out at 8:02 p.m., accompanied by the sounds of a trumpet and kettledrums. All the athletes and visitors stood in memory of the victims of the hostage crisis.

Mohamed Tarabulsi would often recount this touching moment. At the peak of his athletic career, he became a part of world politics on German soil and part of a ceremony watched live by over a billion people all around the world. He never made it back to Germany.

Reception in Beirut in Az-Zaman from September 18th, 1972 | Image courtesy UMAM Documentation and Research
After his return from Munich, he was honoured by the former Lebanese Prime Minister Saeb Salam and was then given the opportunity to work for the fire department. At the end of 1972, Mohamed Tarabulsi succeeded at the World Weightlifting Championships. In 1978 and 1982, he prevailed in the lightweight category at the Asian Games. His friendship with Germany, his memories of Munich always remained strong.  On 1 January 2002, Mohamed Tarabulsi died of cancer. He had hung his silver medal from Germany above his hospital bed.