A pink retro TV, not much bigger than a rice stove, set up in front of a group of young people. English and Thai snippets fly through the dark room. There is discussion, laughter, the atmosphere is as relaxed as on a university campus, the difference being that here 14 students from Thailand and Europe are standing in front of their own works of art, shortly before the opening of the exhibition "Exchange Rate".

A video is playing on the TV. A young Thai woman on the screen muses about love, in a very serious way. "Love doesn't happen just once," is one thing she says, and "Love is another form of art in our lives." Many attendees nod, the topic speaks to everyone. Change of subject, now it's about fear. "I don't think fear makes us a better person, but fear makes us more mature. And it makes us stronger," says the man in the black TV. Another switch, this time to a TV set that is green like a frog. "Anger is like a weapon – if we use it at the right moment," the voice says, and the announcer explains how he deals with his shifting anger. Back on the pink TV, it's all about love again – an infinite video loop about human emotions.

"Emotivity" is the name of the installation on the three retro TV sets. It is a work of art that Thai art student Hana (Patthreeya Ritngam) and English photographer Melody Peacock created together in just two weeks, without knowing each other beforehand.

They are two of a total of 14 students, all in their early twenties and from different cultures, who were brought together in Bangkok to create something new, thanks to an initiative launched by the “European National Institutes for Culture“ (EUNIC). The title of the exhibition and the entire project is “Exchange Rate“, and the meaning of the title goes far beyond the idea of a Thai-European artistic exchange.
Seven Thai students of Digital Communication Design from Silpakorn University International College in Bangkok and seven young artists from Germany, Austria, France, Italy, Portugal, Great Britain, and Spain were selected for this project. Coming from different backgrounds such as photography, video art, architecture, graphic design, and music, they had roughly two weeks to develop and implement their ideas in teams of two – each pair including one person from Europe and one person from Thailand. Exchange rate inspires both the format and theme of their work. 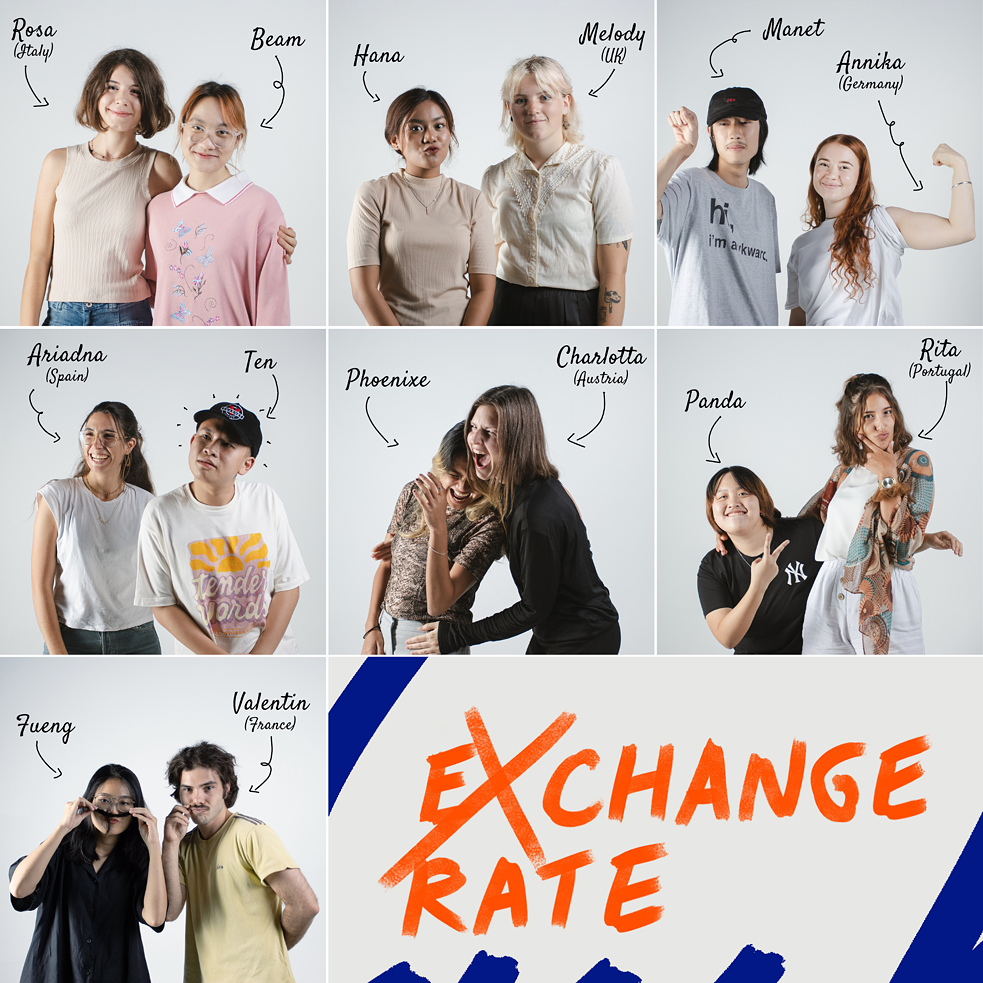 “At first we thought that it was going to be tough, given our different backgrounds, but quite the opposite was the case: We realized how alike we are in many respects,“ says Phoenixe Nievera, one of the Thai artists. She teamed up with Charlotta Öberg, who studies at the Vienna Academy of Fine Arts of Vienna, to create a piece of art called “Translations“: A curtain embroidered by them with poetry in Swedish (Charlotte's native language), Tagalog (Phoenixe's native Filipino language), and English (their common language) that doubles as a screen“. A fraction of meaning always goes lost in translation“, says Charlotta, “that’s what we picked as our theme“. They overlaid their words with street scenes from Bangkok that flickered across the canvas to add a visual language to their trilingual poems.

© EUNIC
One of the project’s main organizers was the Goethe-Institut Thailand, whose director Johannes Hossfeld states: “It is impressive how easily students of completely different artistic tracks engaged with each other, and in such short time. These were real collaborative processes that took place and led to very sophisticated results“, he says German architecture student Annika Jähnichen from Frankfurt was also fascinated by the “Exchange Rate theme. “Manet, my team partner, has a completely different perspective on his life in Bangkok than I do. Here I learned to engage with the unfamiliar“.

The extent to which society depends on each other, on a small and a larger scale, the extent to which all people are alike despite all differences is the basis for the installation of the architect-to-be and the photography student, entitled “it-all-flows-in-you“: It is a fragile wooden construction (Annika‘s creation, referencing the city’s skyscrapers) with photos of passersby, taken by Manet on the streets of Bangkok.
The Spanish ambassador Felipe de la Morena raves with enthusiasm: “These young people are fantastic. You can tell that they have a lot of potential. As long as we can count on a young generation like them, we are safe“. Tim Walz from the German embassy adds: “I was impressed with how well this intercultural exchange worked out. Both sides benefited tremendously from it“.

© EUNIC
You could see how happy the young artists were about the success of their exhibition. For some of them it was also their last evening, the next day they went back home to the universities in Manchester in England and Évora in Portugal, Frankfurt in Germany and Vienna in Austria, Campobasso in Italy, Barcelona in Spain, and Arles in France, where the new university term has already started. “We all learned from each other,“ says Rosa Evangelista from Italy. “Not only from an artistic point of view, but also in terms of our daily lives. Beam is only 21 and only two years older than me, and yet she is a true businesswoman. I learned a lot from her“. Panda, who collaborated with the Portuguese student Rita Silva, was in turn surprised at how differently the guests from Europe perceived Bangkok. “Everything was new to them. I think our lives were turned upside down during these two weeks“.

What will remain after the project are chat groups dedicated to continuing the exchange of ideas. Where will the young artists’ path lead after graduation? Who will visit whom? The intensive exchange as a mixture of cultural dialogue and collaboration has inspired many friendships. The students parted with the promise to visit each other soon, in Europe or in Thailand.