FAZ Review by Andreas Platthaus
When someone like her maneuvers, it is truly worth its while

Judith Schalansky’s latest book is a collection of stories devoted to the overarching theme of loss. But what we gain from it is a kind of literature only rarely found.

What exactly is this book about? The publisher of Judith Schalansky’s „An Inventory of Certain Losses“ doesn’t specify its genre, but even before its publication, it received the Wilhelm Raabe Prize, one of the most prestigious literary awards in Germany and one that in the previous ten years had only been awarded to novels. While the jury noted that the work consisted of “very heterogeneous texts,” it avoided using the term “stories.” By contrast, Judith Schalansky herself does not. And yet, it is not until the very last page of her book, in the index of sources and images, that you find the word. A comment on one of the pieces states that “This story is a montage.” The others are not montages, however, they are all stories.

Stories, however, that obey a different formal principle than one would generally assume. But when you learn – and this realization is reinforced by a book that is beautifully set and bound – that the writer Judith Schalansky is also a book designer, you become aware of the work’s symmetry. For instance, all twelve stories have exactly the same number of pages (sixteen).

Even the preface is the same length. The process of writing such oh-so-very heterogeneous texts was thus subject to a constraint that reveals itself to those who regard the entire book not just as an anthological inventory of losses, but also as an additional chapter of itself. Together with the preface, introductory note and the index of images and sources, “An Inventory of Certain Losses” is made up of sixteen sections. And the tale it tells as a whole is also a disappearance, one that becomes painfully more noticeable the more one admires the care that was taken with the finishing touch: The book’s design is superb. 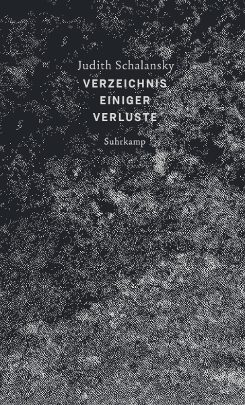 © Suhrkamp Verlag In every respect, “An Inventory of Certain Losses” is a summation of Judith Schalansky’s still young life. She was born in 1980. You might say this is an autobiographical work in which four of the stories take the author’s personal point of view, two of them in turn looking back to her native region of Western Pomerania, where the author grew up in the port city of Greifswald. The most poetic text, “Hafen von Greifswald (Port of Greifswald),” consists of impressions from three walks (or rather, explorations) along the Ryck River, which feeds into the harbor. The loss depicted here is that of a painting by Caspar David Friedrich that was destroyed by fire in 1931 and provides the story’s title. Yet it only serves as an occasion for a description of nature and cultural landscape at the highest levels of concentration and precision. What is gained here – and in each of the twelve stories, much more is gained than lost, – is a narrative tone that positions Judith Schalansky as the most important modern-day practitioner of a branch of literature she has recently revived almost single-handedly in Germany: nature writing as embodied in her series “Naturkunden” published by Matthes & Seitz.

Take, for instance, this flawless passage from another story, assembled not from personal experience, but from archival research: “Until sunset, the ships steered towards the unknown strip of land pulsating in the distance, maneuvering all night until the dawn, in which they had approached to a distance of about four miles from the island, whose southern side must have presented a stunningly enchanting picture in the light of the sun rising from the tides. Touched to the core by the supernatural vision, several crew members took up brush and pen to preserve the auspicious panorama with watery colors and variously practiced strokes rather than leave the scene to the vagaries of memory.” The very use of the nautical term “lavieren” (which in German signifies both maneuvering and applying a wash of color to a drawing) as the sailors prepare to color their drawings epitomizes the full range of Judith Schalansky’s linguistic magic.

However, her tonalities vary. The story about the lost verses of the Greek poetess Sappho – in every respect the heart of the book – evinces the opposite extreme, an essay driven de forma to a rhythmic staccato achieved by division into short thetic sections. The essay itself sings a hymn of praise to love between women – a motif that Schalansky touched on in her most beautiful book to date, the novella “Blau steht dir nicht (Blue is not your color)” from 2008, using androgynous figures, and that now rises to a grotesque climax in another chapter of her latest book: an inner monologue, a stream of consciousness, which Schalansky inserts into the mind of the great film star Greta Garbo – based on the lost debut film by director Friedrich Wilhelm Murnau, whom Garbo admired. The name of the film, “Der Knabe in Blau (The Boy in Blue),” has become the name of the story. Through color, Schalansky alludes to her own sailing novel from ten years ago.

One can feel the author’s fascination throughout the book – be it with distant islands, as demonstrated in her initial success, the “Atlas of Remote Islands” (published in 2009 with several subsequent printings and translated into numerous languages), or with a fictional and mentality-aware exploration of life in the GDR, as seen in her greatest success to date, the novel “The Giraffe’s Neck” (published in 2011). The story that takes up the thread here is called “Palast der Republik (Palace of the Republic)” and is of breathtaking conciseness. The mood suffusing “Atlas,” on the other hand, can be found in the opening story “Tuanaki” about an atoll that sank in the nineteenth century after an underwater earthquake: “One last time I looked at the pale blue globe. I quickly found the position. Exactly there, south of the equator, between a few scattered islands, this perfect piece of land had been situated, away from the world of which it had forgotten everything it once knew. But the world mourns only for what it has known and does not suspect what it lost with that tiny island, although the earth’s spherical shape would have allowed this lost spot to be its navel as well even if it were connected to the globe not by the firm ropes of trade and war, but by the yarn of a dream spun unevenly fine. For myth is the highest of all realities and, I thought for a moment, the library is the true venue of world events.”