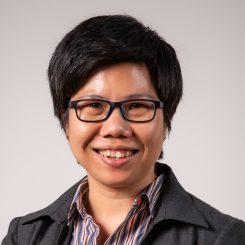 Photo: Goethe-Institut Korea/OZAK Prodpran Arunyig studied German Literature at Chulalongkorn University in Bangkok and received the prestigious Ananda Mahidol scholarship for her outstanding achievements. With this, she completed her studies abroad at the Catholic University of Eichstätt-Ingolstadt, where she studied Modern German Literature, German Linguistics and Classical Philology (Latin). In 2010 she graduated with a M.A. In her master's thesis she treated "The Reception of Petronius in German Literature of the Eighteenth Century".

After returning to Thailand, she worked initially as a freelance interpreter and translator. Since 2016, she has been a lecturer at the Faculty of Liberal Arts of Thammasat University in Bangkok and teaches German Literature and translation courses. Prodpran Arunyig lives in Bangkok.