With his Stumbling Stones, Gunter Demnig keeps the memory of the victims of National Socialism alive. The first Stumbling Stones workshop outside Germany opens during the summer – at the Goethe-Institut in Amsterdam. In an interview, the artist explains how this came about.

You have been keeping the memory of victims of National Socialism alive with the Stumbling Stones since the 1990s. Now there’s a Stumbling Stones workshop outside Germany for the first time: in the garden of the Goethe-Institut in Amsterdam. What’s the story behind this?

Gunter Demnig: At the beginning, the Netherlands was actually a bit of a problem. People were against the Stumbling Stones. Until Borne, a district in the province of Overijssel, made the decision around 2004 or 2005: “We’ll do it!” This started everyone else off.
Now the Netherlands is the country with the most Stumbling Stones outside Germany. And we are still receiving many requests. In Amsterdam itself, the waiting time is four years. This can sometimes be unfortunate because very many of the relatives are already over ninety. Once I went specially to Amsterdam for the day because an elderly lady had cancer and knew that she would not survive the year. So I said: “I’m coming and we’ll do it.”
In Amsterdam the workshop was founded through a “Stichting” – similar to a registered charitable association – by Alexander Stukenberg, the designer and coordinator of STIFTUNG – SPUREN – Gunter Demnig for the Netherlands. He was trained and can now make the Stumbling Stones too. I organised a fully equipped workshop especially for him and it’s wonderful of course that the Goethe-Institut has provided the room for this. 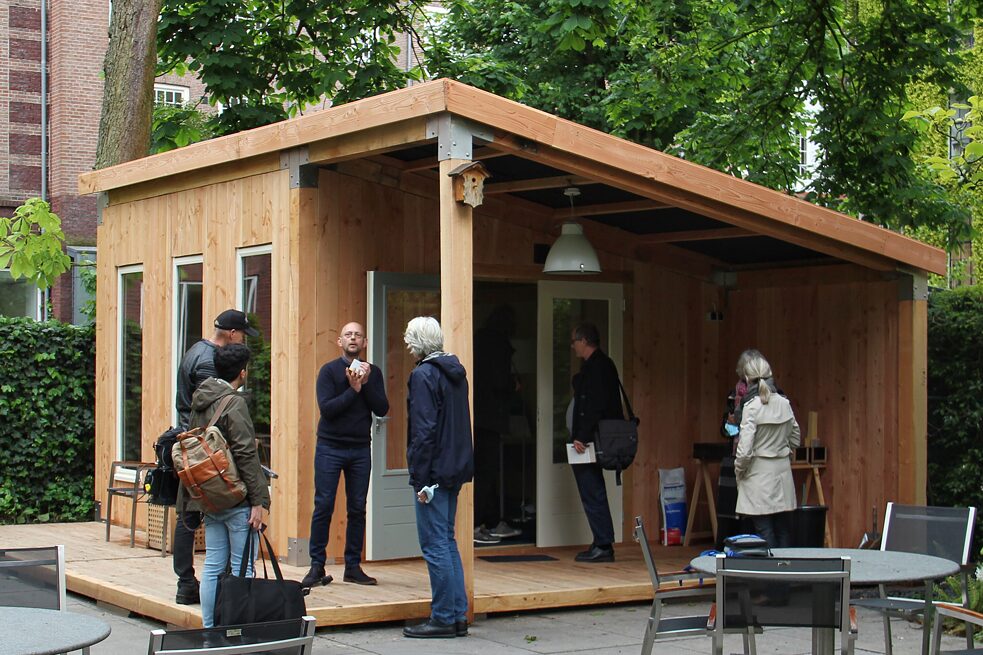 Stumbling Stones workshop at the Goethe-Institut in Amsterdam | Photo (detail): © Michel van Es
How many requests do you currently receive for a Stumbling Stones to be laid?

Gunter Demnig: It varies, but also includes the other European countries – increasingly Spain or Italy – because many people were sent to Germany as slave labourers.

How long does it take to produce a stone, up to the point that it is laid?

Gunter Demnig: We require a lead time of at least six months. We have to get the data which is then checked and then we make the applications. Sometimes an application goes back and forth three or four times, until an inscription is approved by absolutely everyone and laid.

How widespread is the Stumbling Stones project in general?

Gunter Demnig: We are approaching 90,000 stones and in August Serbia will be the 27th country to take part. The project is now taking on the dimension that I have always dreamed about. Symbolic stones are appearing in all the places where the German Army, the SS and the Gestapo committed their terrible deeds. The whole thing has become a generational question, because now grandchildren or great-grandchildren ask, what became of our grandma? Why didn’t we ever have grandparents? So it continues unabated.