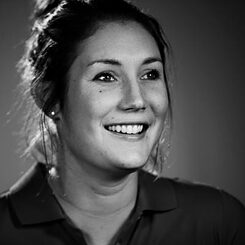 She was the only athlete from North America to come out publicly in opposition to Russia's anti LGBTQ+ laws before the Sochi 2014 Olympics.

She now lives in Toronto and works for CBC Sports where she hosts Players Own Voice- The Podcast which debuted at #3 on iTunes. She is a passionate advocate for mental health issues, eradicating homophobia in sport, and telling the stories of Canada's High Performance athletes.