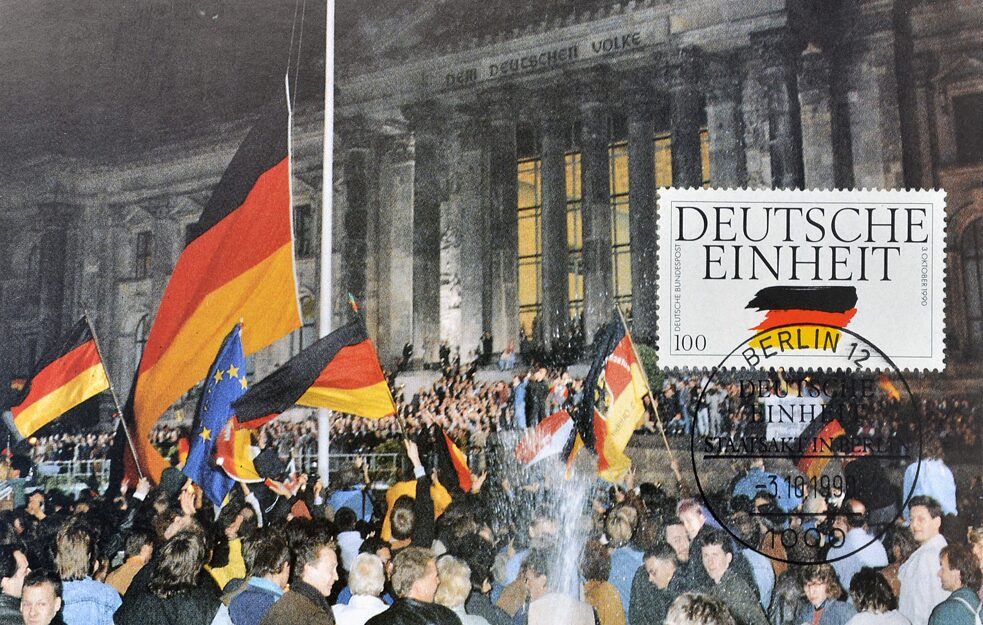 One year after the fall of the Berlin Wall and the end of the SED regime, the goal of West German postwar policy had been achieved: the reunification of the divided country. In 2020, we will celebrate the 30th day of German reunification. Look back with us on an exciting chapter of German-German history.

Thirty years after German reunification, are there still differences between East and West? In an interview, former GDR civil-rights activist Freya Klier talks about the time just after the Berlin Wall fell, the new freedoms it brought and about whether Germans are now “one people”.

Remembrance Politics
The ambivalence of coming to terms with history

Germany and the Germans brought unprecedented suffering to the world during the Nazi era. The way Germany dealt with its past is considered an example of a successful historical reappraisal. But does that really correspond to reality? How did the two German societies deal with National Socialism and the Holocaust after 1945?

Now, what belongs together, will grow together

Spring '90
"Suddenly everyone is here again“

One year after Berliners danced on the wall, Germany is one country again. But how did the reunification feel for a former inmate of Hohenschönhausen? A story about Argentinean steak at the Stasi headquarters, unexpected reunions and Berlin clubs. 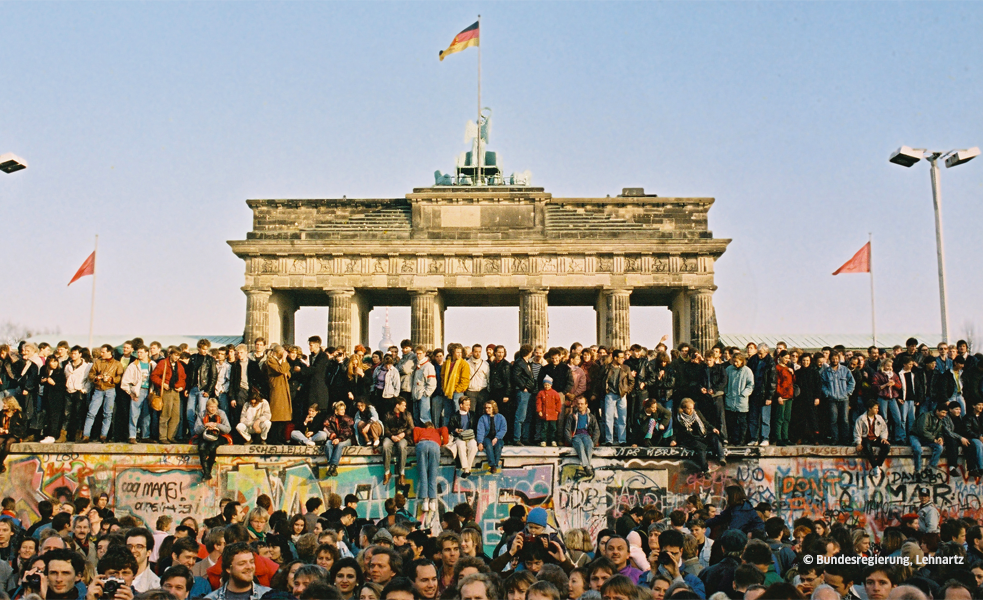 Mr. Gorbachev, tear down this wall!

Ronald Reagan at the Brandenburg Gate on 12 June 1987

... also marked the end of the Cold War. Humanity let a sigh of relief. On this occasion, the Bundesstiftung zur Aufarbeitung der SED-Diktatur has produced a contemporary historical exhibition, which the Goethe-Institut Montreal showed in November 2019.

The history of the Berlin Wall and of the inner-German border is documented on 20 large-format posters. On display are a number of impressive photographs and documents from the two newspapers’ archives. Addressed themes are the GDR’s border regime and its victims, escape helpers and flight, everyday life along the inner-German border and within the partitioned city, as well as the joyful overcoming of Germany’s partition during the Peaceful Revolution in 1989.

Read on to learn more about the Wall, its history and the people who had to live with it.

Modern-day development projects vs. trailer parks and teepees: where the Wall once divided Berlin in half, the city's housing culture is now torn between memory and modernity, nostalgia and progress.

In any case, it wasn’t for the bananas

While the leaves on the right and left of the Berlin Wall are turning autumnal, the Peaceful Revolution is beginning in the GDR. One year later, Germany is again one country.

The facts are familiar - but how did autumn 1989 really feel? On Monday demonstrations and the sale of chunks of the Wall to tourists.

Experience this era in 7 chapters with reports and photos from the time, told and photographed by contemporary witnesses.

Chapter 1
On the traffic signs' Absurdity

Chapter 4
The first day "over there"

Stories about the wall 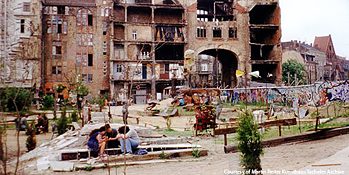 Podcast
The Big Pond #48: Legacies of the Berlin Wall

“It was chaos, it was total chaos.” When the Berlin Wall unexpectedly fell in 1989, it triggered a time of massive flux for the newly reunited capital of Germany. For The Big Pond, KCRW Berlin speaks to Berliners who helped build the city’s lasting legacy.

German showrunners have discovered that life on opposite sides of the Iron Curtain makes for gripping television.

Exhibition | September 28 to December 18, 2019 | Goethe-Institut Montreal
The Wall - a border through Germany

On display are a number of impressive photographs and documents from the archives of two German newspapers. Addressed subjects are the GDR’s border regime and its victims, escape helpers and flight, everyday life along the inner-German border and within the partitioned city, as well as the joyful overcoming of Germany’s partition during the Peaceful Revolution in 1989.

When the Berlin Wall fell on November 9, 1989, this set the domino in motion leading to the reunification of the two Germanys on October 3, 1990 and the downfall of some of the most oppressive regimes in Eastern Europe. This historic event became a source of inspiration for many decades for filmmakers from both East and West Germany. The Goethe-Institut presents four films, two from East Germans and two from West Germans, to mark this important anniversary.

The Goethe-Institut and the Faculté de communication de l’UQAM cordially invite you to come and mark the 30th anniversary of the fall of the Berlin Wall as part of the Journées de la culture.

The wall was a building of fear. On 9 November 1989 it became a place of joy.

The exhibition „The Wall – a border through Germany“ was produced by the Federal Foundation for the Study of Communist Dictatorship East Germany (Bundesstiftung zur Aufarbeitung der SED-Diktatur) and by the newspapers BILD and DIE WELT in the year 2011 on the occasion of the 20th anniversary of the fall of the Berlin Wall.

The Goethe-Institut Montreal will be showing this contemporary historical exhibition from 28 September 2019.

On display are a number of impressive photographs and authentic documents. Teaching materials that allow you to integrate the subject into your classes are available here.

The material is divided in three parts:

Activties during the visit
These activities refer to the content (text and photographs) of the posters and should be used during the visit of the exhibition. More about the Berlin Wall
Here you will find some assingments to deepen the knowledge of your students about the Berlin Wall. They can find the answers either on the posters or by researching multimedia sources.