Culture of Welcoming
Library Services for Refugees and Asylum Seekers 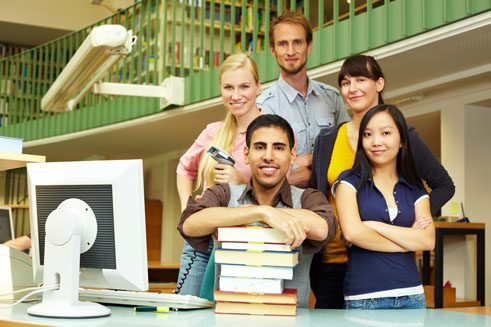 Arriving in a new country with a different culture and language confronts all refugees with a challenge. To make their arrival easier, libraries in Germany offer many different services and so contribute to a culture of welcoming.

“Coming to Leipzig”, “Someone is on the Move”, “Overcoming Strangeness”, “Dialogue in German, “With Open Arms” – in many federal states more and more libraries want to ease the settling in of refugees and aylum seekers with special services. In these activities, libraries usually cooperate with civic initiatives. Libraries provide primarily their media expertise, but beyond that the encounter between people and contact with locals facilitate getting to know the new surroundings.

In their media services libraries have been able to draw on the holdings acquired in recent decades for “guest workers” and immigrants. With the aid of project funding and donations many libraries have been brought up to date these stocks and made them available to refugee and asylum seekers. Libraries also seek to reach people directly where they live – for example, the Bremen City Library with media boxes or the Erlangen City Library with language promotion kits. In special library tours, library staff at the Duisburg City Library and the “Asylotheque” in Grassau in Upper Bavaria introduce users to the multilingual offerings. An important focus of the libraries’ welcome services lies on media for children and young people. This target group is also in the forefront of encounter offerings: libraries in Cologne offer sponsorship and mentor programmes for extracurricular work with refugee children. Municipal libraries in other cities organize mentors for families as part of the welcoming initiative, and under the title of “Coming to Leipzig” the Leipzig City Library trains sponsors for refugees and asylum seekers.

The creative project “Someone is on the Move” of the Magdeburg City Library gave refugee children the opportunity to tell about and present their homelands. The workshop for young people at the International Youth Library in Munich, “Overcoming Strangeness”, offered Germans and refugees and asylum seekers the opportunity for creative exchange.

The library as place

In view of the living conditions of refugees and asylum seekers in temporary shelters without technical equipment and WLAN, the concept of the library as place takes on a special meaning: Public libraries are low-threshold services, and they have sought to lower the bureaucratic hurdles yet further. Library cards are issued free of charge, the otherwise required presentation of official papers is waived and premises, internet access and media service are made available. In Hamburg, for instance, citizens donate money for free customer cards online passes which enable refugees and asylum seekers to use the library online services, as well as lending a limited number of physical media. Libraries offer language courses and computer workstations for learning German. Complemented by dictionaries from the library collections, the essential conditions are in place to ensure that the library can be used for individual and collective learning. Language courses and initiatives such as “Dialogue in German” at the Hamburg Public Libraries have gone down well. Here people can exchange experiences and make contacts in a pleasant atmosphere.

The nationwide services of libraries are made possible only through donations, sponsors and public funding. Voluntary helpers are indispensable for all these actions. The libraries therefore cooperate closely with humanitarian organizations such as the Alfred Töpfer Foundation and the German Red Cross and employ themselves voluntary staff. This includes many people with immigrant backgrounds. They receive support and continual professional training from public libraries. All library projects collaborate closely with various local initiatives and civil society partners.

The first step to a welcoming culture

Refugees and asylum seekers often constitute very heterogeneous groups, hailing form various countries with various languages and cultural backgrounds. At the beginning libraries can therefore offer them only general services. The contribution of libraries to a welcoming culture thus consists to begin with in facilitating access to information, knowledge and encounters. Only once the interest awakened can libraries target the specific needs of the individual.

Beate Detlefs has directed libraries at home and abroad since 1985, including for the Goethe-Institut. She lives in Berlin.