Goethe Annual Lecture 2022 Mithu Sanyal: Politics – What’s love got to do with it?

We are delighted to have Mithu Sanyal as one of this year’s speakers of our Goethe Annual Lecture series at the Goethe-Institut London. In her talk, the author, cultural scientist, and journalist will explore the pitfalls and promises of a politics of love in times of ever-growing divisions.

The talk will be moderated by Nastaran Tavakoli-Far, journalist and radio/podcast/TV host.

It’s a preconceived idea that love and politics don’t go together. That they are polar opposites. Moreover, love has become a dirty word in politics. We can talk on social media about sex till the cows come home – but love is... too cute, too lovey-dovey, and too unpolitical.
This has not always been the case. Most movements for social justice had a love of ethics. Gandhi placed love at the centre of his campaign to free India. Martin Luther King preached and practised love. And James Baldwin called for a politics of love.

What has happened to marginalise love in the political discourse? And what can politics informed by love look like?

Book Tickets through Eventbrite Register for the livestream

"Refreshingly bold, honest, critical and yet empathetic take… Sanyal is not only courageous and funny, but also gifted with a decent portion of self-irony." Clemens Ruthner, Ö1 Ex Libris on Mithu Sanyal and Identitti.

Mithu Sanyal is a novelist, academic, literary critic, columnist and broadcaster. Her work has been published by international newspapers including The European and The Guardian, DIE ZEIT, Süddeutsche Zeitung, NZZ, Frankfurter Rundschau etc. Her books include a cultural history of the Vulva (Wagenbach) and Rape – from Lucrezia to #metoo (Verso Books). Her debut novel Identitti (2021) was shortlisted for the German Book Award and is published in English by Astra House and V&Q Books. She has just finished a book about Emily Brontë which is due out in October 2022 with KiWi. 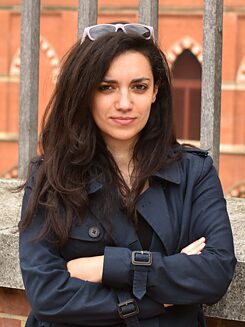 © Nastaran Tavakoli-Far Nastaran Tavakoli-Far is a journalist and radio/podcast/TV host fascinated by why we do what we do. She reports on economics, business, technology, psychology, and the intersection of these, and increasingly does investigative work too. This has led to her investigating a women's wellness company for the BBC which has had significant impact, and she is currently doing deep dives into tech investments in the Western US, and how Silicon Valley is impacting how we work, create communities and find purpose in the modern age. She recently co-hosted the weekly podcast Think Like An Economist with Betsey Stevenson and Justin Wolfers, where she helped these acclaimed economists teach listeners super tools from economics we can all use to live better, whether making decisions about our careers, investments or tricky family dynamics. She has interviewed people such as Daniel Kahneman, Dan Ariely and Esther Perel and her work has received acclaim from international press including the Financial Times, Time Magazine and Denmark's Politiken.
She was educated at the London School of Economics (Economics BSc) and Columbia University (Journalism MS) and has received awards from the Foreign Press Association of New York and the Shorty Awards.

Here you can find videos of previous lectures.