In Conversation with Marius Hulpe
Poetry: A Link Between Countries and Cultures

The ASEAN Literary Festival is an annual cultural event that sees the participation of all ASEAN countries – it features an extensive and diverse programme for everyone who is interested in literature. This year, the festival coincided with the 50th anniversary of ASEAN and took place in the Old Town of Jakarta (Fatahillah Square). Numerous writers from ASEAN countries as well as Europe participated, with poet, prose writer and essayist Marius Hulpe representing Germany.

How did you like the ASEAN Literary Festival in Jakarta? How does it compare to the Makassar International Writers Festival, that you joined in 2016? What kind of differences did you notice?

I think, here in Jakarta everything is a little bit bigger and at the same time, the festival is not as tropical and experimental as the one in Makassar. The setting seems to be more established, and that makes it different. That’s why I am very happy to have been able to experience different forms of festivals within the Indonesian culture. Both festivals seemed very political to me, maybe that is one of the similarities. And of course the sincere togetherness; there is hardly any reservation between the people. This is something we could actually try to implement in German literary and cultural festivals. We live in a culture that is dominanted by distance and representation, people hardly approach one another, unlike here in Indonesia. In that regard, Indonesians are world champions

What does poetry mean to you?? 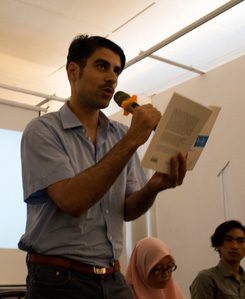 Marius Hulpe | © Goethe-Institut Indonesien How much time do you have? A couple of years? If you were to accompany a single author and his works over a years, you would definitely get a lot of different answers to this question. You then need to multiply these answers with the number of all existing poets. For me, poetry is a form of writing in certain moments. Poetry has many advantages. In philosophy, we have speculative realism, that puts a strong focus on the phenomenon of acceleration. Poetry is for example a good antidote to the excessive acceleration of our daily lives. People often complain that they don’t have time to read anymore. In that case, I can only say: read a poem every day, ideally this poem will cover the same ground as ten novels in only ten minutes. You can then spend the rest of the day thinking about what you have just read.

Currently, poetry in Indonesia is highly appreciated, not least because of M. Aan Mansyur. Many young people express themselves in poetry. How would you rate the situation in Germany, especially regarding the youth?

It could be more vivid and nuanced, less assertive and bound to the curriculum as well. Schools especially, in my opinion, miss the target by far. Individual teachers and mediators who are committed to poetry created after 1945 are few and far between. Many are simply not brave enough. Here in Indonesia, there is a tradition of oral poetry, but this has a very positive effect on the broadness of the recipients. What is still lacking is perhaps an accomplished literary criticism, but that would only be the next step anyway. It’s more important to read, read aloud, talk about it and tell stories. How and why did this come into being? Under what conditions? I myself became enthused with poetry this way, by someone who is unfortunately not with us anymore.

These days, poems are spread globally on social media with the hashtag #instapoetry. In addition, “poetry slams” have become more and more popular? What do you think about these phenomena?

I fully support the first one, but when it comes to slams, I don’t have much knowledge. I was often dragged to such poetry slams, but I never liked the atmosphere. That is, of course, subjective, but slams are simply not my style.

You joined the Makassar International Writers Festival 2016 on the island of Sulawesi. What expectations did you have of Jakarta, and were they fulfilled in the end?

Definitely! I had heard before that Jakarta is supposed to be much more exhausting than anything I had seen from Indonesia so far - a true sinkhole. That may be true, but at the same time, you are also rewarded with marvelous impressions. Take the traffic, for example - at first glance, it seems to be pure chaos. But this is a misconception.

Often, elderly men are standing in the middle of a crossroad - in Germany, they would probably be retirees - and then, hundreds, literally hundreds of motorbikes, buses, taxis and trucks are coming at them at full speed from different directions, without any traffic light. With only a few hand gestures, they are able to direct the traffic and receive a coin through the car window every so often. In Germany, this would be unthinkable. The cars would probably mow them down.

What will you take back to Germany from your time in Indonesia?

Like last time, a lot. The many encounters, of course, and what was really interesting and exhilarating for me is the observation that we are not that far away from each other, that we care about the same topics, and that there is a huge, unexploited potential for intercultural exchange. And what can be more beautiful than the knowledge that there is still much left to do?

The interview was conducted by Nicole Brune,
Kulturweit Freiwillige at Goethe-Institut Indonesien (March-August 2017)