How do you create an interesting game? What is the process for becoming a game developer and the steps for production-to-marketing your own game? The PRESS START! podcast invites us to explore the world of game development. Listen to inspirational stories from players in the gaming industry in this podcast! 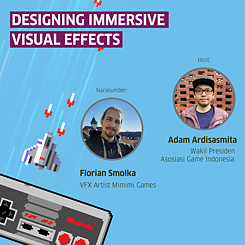 © Goethe-Institut Indonesien Florian Smolka (Mimimi Studio) designs visual effects for games. To do that, he has to combine two different skills: programming and art. In this episode, Florian explores what it takes to make a game more immersive and interesting with visual effects.

Biography:
Florian Smolka is working as an VFX artist at Mimimi Game Studio. He was involved in developing real-time tactics games such as Desperados III and Shadow Tactics: Blades of the Shogun. He has spent 9 years working in the game industry. As a VFX artist, Florian is in charge of designing the audio and music in a game. 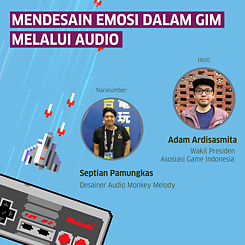 © Goethe-Institut Indonesien Septian Pamungkas (Monkey Melody) is responsible for designing the audio and music for numerous games. Making music for a game has its own complexities as it relies on the control and input from the player. He talks about what techniques an audio designer needs to design suitable music for a game.

Biography:
Septian Pamungkas is the founder of Monkey Melody, a company that develops music and audio for games. He has 8 years experience in multimedia and the game industry as a multimedia specialist and sound designer with a credit list of over 70 multimedia projects. He is also the initiator of “Game Music Talk Indonesia”, the first talk show and seminar on game audio in Indonesia.

Being a 3D Designer for Games in Japan 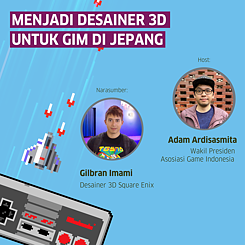 Biography:
Gilbran Imami is a 3D designer at Square Enix Japan. Prior to that he was a computer graphic designer in the Character Team division at Koei Tecmo Japan. At Koei Tecmo, he helps design 3D models of characters in the game Dynasty Warriors 9.

Painting Art in a Game 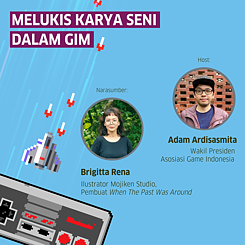 © Goethe-Institut Indonesien Brigitta Rena (Mojiken Studio) has produced numerous beautifully artistic illustrations for games, including “Raven Monologue”, “She and the Light Bearer”, and “When the Past Was Around”. Here she shares her insights into designing artistic value illustrations.

Biography:
Brigitta Rena is a 2D artist at Mojiken Studio, where she has illustrated several games, including  Raven Monologue, She And The Light Bearer, and When The Past Was Around. Apart from creating illustrations for games, she has also worked on designing visual identities, caricatures, illustrations for children’s books, editorial illustrations, and various promotional videos.

From Animator to Game Developer 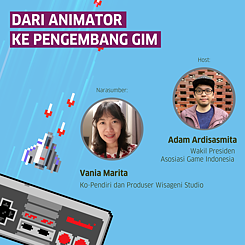 © Goethe-Institut Indonesien Vania Marita (Wisageni Studio) started her career as an animator and then moved into the game industry. In this episode, Vania speaks about the different challenges of creating animations and games. 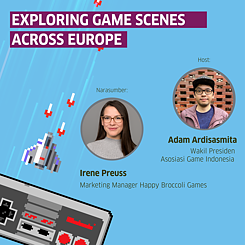 © Goethe-Institut Indonesien Irene Preuss (Happy Broccoli Games) started her game career working to localize games into different languages. She is currently responsible for building networks among game companies in Europe. Based on her experience, Irene shares her takes on different gaming scenes among European countries.

Biography:
Irene Preuss has been working in the games industry for the last 4 years in business development, event organization and marketing roles. She is currently managing the marketing strategy for the Berlin-based indie studio Happy Broccoli Games working on the title Kraken Academy!! set to release later this year. After being involved in organizing several events around Europe, Irene has built a strong network of gaming professionals and is very keen on bringing people together.

From Triple A to Indie Studio 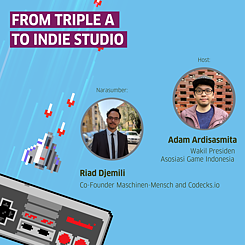 © Goethe-Institut Indonesien Riad Djemili (Maschinen-Mensch & Codecks.io) tells the story of how he quit his job in a Triple A game studio in Berlin to be an indie game developer. Riad also shared how he used personal branding as a marketing strategy.

Use this link to get discounts for Codecks.io

Biography:
Riad Djemili is the co-founder of Berlin indie game company Maschinen-Mensch. Their debut title Curious Expedition, a game about fictitious 19th century expeditions was released in 2015 on Steam Early Access and has sold over 200,000 units. For the sequel Curious Expedition 2 the team has grown from two to eight people and is working with Swedish publisher Thunderful.

Since 2019 Riad is also the CEO of the Codecks company, which works on a playful project management tool dedicated to game developers.

Riad started working in the game industry in 2005 and worked for seven years at Berlin game company YAGER, where he among other titles worked on the critically acclaimed game Spec Ops: The Line. 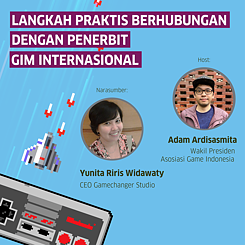 © Goethe-Institut Indonesien Riris Widawaty (Gamechanger Studio) has a unique career journey. From being the head of a library, she moved into the gaming industry and became the CEO of a game studio. She reveals tips about how to deal with game publishers and how to recognize good publishers.

Biography:
Riris Widawaty is the Director of Gamechanger Studio, a game development studio. Her background is in library and information science. She was a librarian for 20 years before becoming a game developer in 2013. She also heads another game studio called Gambreng Games.

Strategies for Developing a Game Studio at an International Level 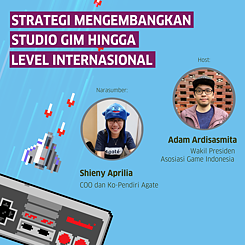 © Goethe-Institut Indonesien Shieny Aprilia (Agate Studio) shares how she started up Agate when she was a university student and how it grew to become a game studio with hundreds of employees and international level collaborations with companies such as Square Enix and Electronic Arts.

Biography:
Shieny Aprilia is the co-founder and Chief Operating Officer of Agate Studio. When she first joined Agate in 2009, she was a game producer. A year later she was appointed Chief Operating Officer. While at Agate, she led the development of the gamification trend in Indonesia. She is the 1st winner of the Indonesia Young Woman Future Business Leader 2014 awarded by SWA magazine.

The Ins and Outs of the Game Publishing World 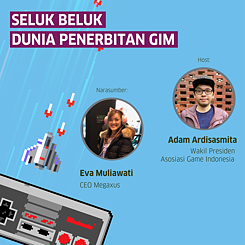 © Goethe-Institut Indonesien Eva Muliawati (Megaxus) has published a variety of popular games, one of which is the well-known “Ayo Dance”. She shares her journey beginning with her stay in Korea and continuing to her research of popular games and developing her own game publishing company.

Biography:
Eva Muliawati is the CEO and founder of Megaxus Infotech, a game distribution company founded in 2005. Megaxus has successfully released at least 19 games for PCs and mobile devices. The most popular games published by Megaxus are Ayo Dance and Lineage II. Under her leadership, Megaxus has become the leading game publishing company in Indonesia.

Ricky Setiawan (GGWP) expresses his views on the game industry in 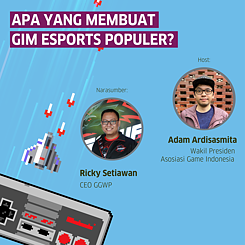 © Goethe-Institut Indonesien Indonesia. Based on his experience running media operations that focus on eSports, Ricky explains how eSports has become popular in Indonesia.

Biography:
Ricky Setiawan is the CEO and founder of GGWP.id, a news agency reporting on the latest news on esports while providing game guides. GGWP.id also has its own highly acclaimed esports team. During his time as a student at the University of Indonesia, he earned 12 titles in business competitions, one of them being the P&G ASEAN Business Challenge in April of 2011. His skills in writing earned him the distinction to be the only Indonesian representative for a Wikimedia conference in Poland. Prior to starting his own company, he worked at IBM, an American IT company. 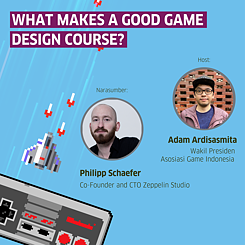 © Goethe-Institut Indonesien Philipp Schaefer (Zeppelin Studio) went on to found a game studio after winning Microsoft Imagine Cup when he was a student. Philipp talks about the importance of teaching relevant knowledge that can be put to use for future game designers.

Biography:
Philipp Schaefer is the co-founder and CTO at Zeppelin Studio. He overlooks the development from the production perspective and organizes the asset flow with the artists, the sound studio and the level designer. He had previously been the Project Manager at gamebook.io, where he was involved in project conception and team management for serious games. 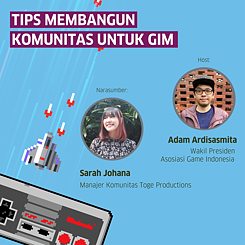 © Goethe-Institut Indonesien Sarah Johanna (Toge Productions) shares tips and tricks for building a community for games. She also explains how a community manager for mobile games differs from a manager for computer games. Further, Sarah discusses how game developers can use Twitter to build relationships.

The Importance of Joining thE Game Developer Community 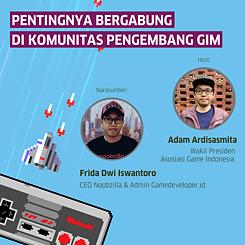 © Goethe-Institut Indonesien Frida Dwi, also known as UB (Noobzilla & GameDeveloper.id), talks about his experience as an active member in a game developer community, about career building, and the life of an indie game developer.

Biography:
Frida Dwi Iswantoro, better known as UB, started his game development career in 2007. He currently develops games with the Noobzilla studio, a game development duo team from Sleman, Yogyakarta. Since 2012 he and GameLan (Jogja Game Developer Community) have undertaken more than 100 events, including sharing sessions, expos and routine game jams. Managing the GameDeveloper.ID site is another of his responsibilities, a site which collects information and data related to Indonesian game developers. 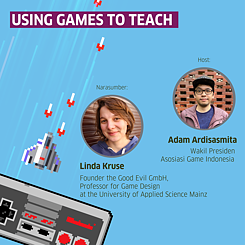 © Goethe-Institut Indonesien Linda Kruse (the Good Evil GmbH) juggles her roles as a game studio founder, game designer, professor of game design, and vice chairwoman on the board of the German Games Industry Association. She talks about how games can be used as an educational tool. She also discusses how she advocates for more diversity in the game development industry.

Biography:
Linda Kruse is the game designer and founder of the independent game studio the Good Evil GmbH. She graduated with an M.A. in Game Development and Research and holds a B.A. in Creative Producing. Since 2018 Linda is vice chairwoman on the board of the German Games Industry Association e.V. and one of 25 women whose “inventions change our life” was awarded by Edition F. She has been a professor for game design at the University of Applied Science Mainz since 2020. Linda’s aim is to contribute to a better planet through games & play.