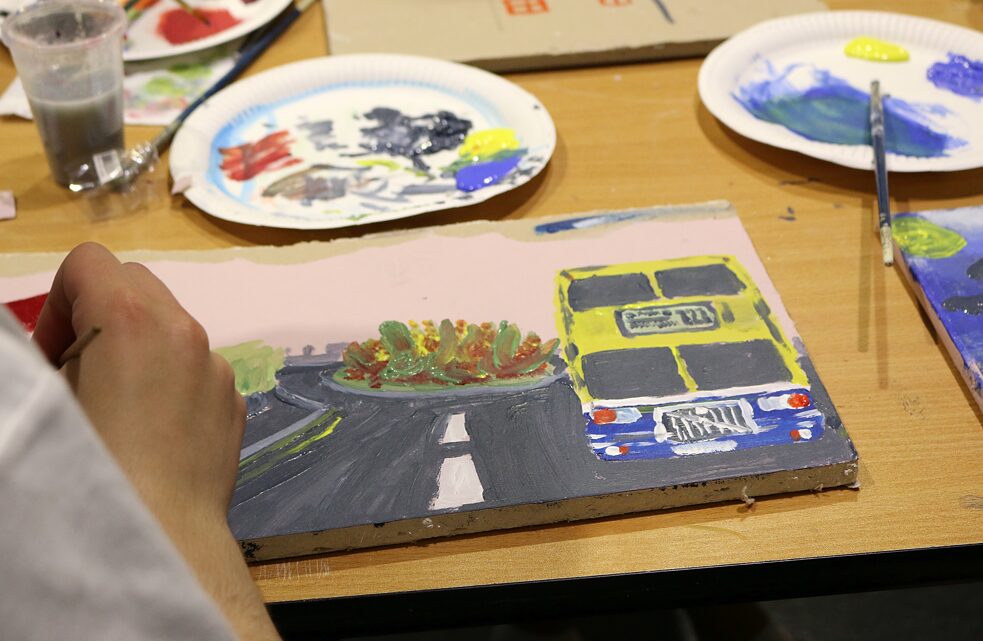 The Creative Arts Programme is an project of the Trinity Access Programme in cooperation with the Goethe-Institut Irland and partners from the cultural scene for students who are between school and further education.

The week-long programme is designed to help young people from across Dublin gain greater access to culture and cultural institutions. It is a spin-off of the Freiraum Project, which was very successfully adopted until 2021 but has now ended. 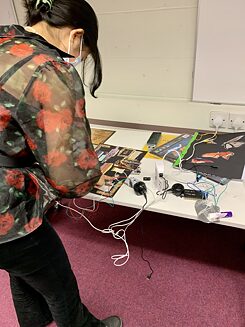 Gallery Day 2022: In the workshop with artist Tara Whelan, students made sound collages. | © Goethe-Institut Irland During the week of the Creative Arts Programme, each day is dedicated to a different cultural institution: students participate in music, theatre, art, and creative writing workshops while gaining access to theatres, galleries, writing centers, or concert halls – places they may have previously perceived as denied. In the workshops, representatives from the institutions encourage the young people to discover new ways of thinking, to use their creativity, and to become actively involved in Dublin's creative scene – and in this way to take the spaces for themselves as well. 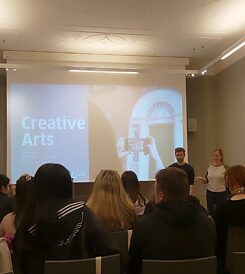 After a two-year pandemic, the Creative Arts Programme was back on site at the Goethe-Institut Irland. | © Trinity Access Programme While the festival was held digitally in 2020 and 2021 due to the global pandemic, the workshops will once again take place on-site at the partners in June 2022. Partners this year include Douglas Hyde Gallery, The LAB, Fishamble Theatre Company, Abbey Theatre, Fighting Words and the Royal Irish Academy of Music.

What has happened so far ...

Creative Arts Programme 2022
After two years in which the workshop week had to take place online due to the pandemic, this year the Creative Arts programme again took place on site in the cultural institutions with students from all over Dublin. Despite, or perhaps because of, the social isolation of previous years, the young people quickly developed a great group dynamic, making the week a very special experience.

Monday, 13 June:
Goethe-Institut Irland and Trinity Access
The students spent the first day of the week at the Goethe-Institut Irland: after a brief introduction to the work of the institute, the students were able to test their German skills in a small get-to-know-you session organized by the LanguageDdepartment. In a social media workshop, they then created Culture Profiles on events from the fields of art, literature, music, film, and theatre in the design programme Canva. To conclude the day, the students explored their literary interests and investigated the library with a scavenger hunt.

Tuesday, 14 June:
Gallery Day
The second day was all about galleries: Douglas Hyde Gallery introduced the students to contemporary art, while they approached the field of Visual Thinking Strategies (VTS) with The LAB and solved an assignment. In the afternoon, they were able to get creative themselves in a workshop with artist Tara Whelan, creating sound collages from snippets of noise and old magazines and coffee table books.

Wednesday, 15 June:
Theatre Day
Theatre Day was shared between the Fishamble Theatre Company and the Abbey Theatre. This was all about what it takes to put on a good play: After some acting warm-ups as well as input on theatre design, the students came up with their own exciting stories. With the help of experienced staff from both theatres, they turned these into short scenes and tested their acting skills in the process.

Thursday, 16 June:
Fighting Words Day
On this day at Fighting Words, the young people tried their hand at creative writing. They were given the opportunity to write stories, plays, song lyrics or even poems under supervision - and they were able to let their imagination run wild. In two groups, the students wrote two texts, which were to become the basis for the following day.


Friday, 17 June:
Royal Irish Academy of Music (RIAM)
On the last day of the workshop week, the students were introduced to the art of composing and song writing. With the help of two musicians from the Royal Irish Academy of Music, two very different and challenging pieces were created from two texts that the students had written the day before at Fighting Words. The students were particularly involved in the development of the melody and the singing, but also in the creation of the musical accompaniment. A special highlight was the performance of the two pieces during the closing ceremony.
Creative Arts Programme 2021
03.02.2021 A day with Fighting Words (postponed from 26.03.2020)
The aim of Fighting Words is to help children and young people, as well as adults who did not have the chance as children, to discover and use the power of their own imagination and creative writing skills. At its core, it is also about something much broader and more inclusive. Namely, using the creative practice of writing and storytelling to empower children and young people - from all kinds of backgrounds - to be resilient, creative and successful in shaping their own lives.
In the one-day online workshop, a group of Transition Year students were able to try their hand at storywriting, playwriting, songwriting and poetry. You can find the results here.
Creative Arts Programme 2019-2020
This series of workshops was aimed at Transition Year students. Each workshop offered an interactive introduction to a different aspect of the creative arts. The workshops took place on the last Thursday of the month from October 2019 to April 2020 (with the exception of December). The students took part in a morning, lunch and afternoon session at each institute. The schedule for these events were as follows:

28.11.2019 A day at the Goethe-Institut Ireland
The second Freiraum excursion went to the Goethe-Institut Irland in Dublin. The young people were given a guided tour of the newly renovated rooms and library, as well as an introduction to cinematography and made their own film using their smartphones.

23.01.2020 A day at the Fishamble Theatre
Fishamble is an Olivier Award-winning, internationally renowned Irish theatre that discovers, develops and produces new work on a range of scales. Fishamble has staged its productions to Irish audiences as well as in 19 other countries. Each year Fishamble supports 60% of the writers of all new plays produced on the island of Ireland - through its extensive programme of training, development and mentoring opportunities.