As the globally active cultural institution of the Federal Republic of Germany, we advocate for understanding between Germany, Europe and the world. The framework agreement with the German Federal Foreign Office is the foundation for this work. Worldwide, we provide information about the cultural and societal diversity of Germany and Europe. 158 Goethe-Instituts in 98 countries together with numerous partner institutions form the basis of our global network. The Federal Foreign Office supports our work institutionally. As a registered charity we operate autonomously on a legally independent basis and are not affiliated to any political party. We generate around a third of our revenue ourselves through income from language courses and examinations. We also receive support from the European Union (EU), further German federal ministries as well as foundations and companies in Germany and abroad.

We contribute to establishing the German language in the educational systems of the guest countries. We support over 100,000 schools worldwide in giving high-quality German tuition, and promote the advanced professional training and qualification of teachers of German. Furthermore, we offer languages courses ranging from general German courses to prevocational language courses and seminars to raise societal and cultural awareness. Our services include online courses and autonomous learning programmes. Every year, more than half a million people sit a German examination at a Goethe-Institut or one of our cooperation partners. With a wide range of educational and information programmes, we support in particular students and skilled workers from abroad on their route to Germany.

We believe in the potential of international cultural exchange. Our approximately 20,000 cultural events per year take place in partnership with governmental and non-governmental institutions and initiatives from civil society in our guest countries. We qualify, advise and interlink cultural professionals and support the development of sustainable structures in the cultural and creative economy by advanced training measures for cultural entrepreneurs or the internationalisation of creative companies. With our residence programmes, partnerships and co-productions, we promote the networking of cultural professionals around the globe. We offer stakeholders from civil society a protected space and scope for a sincere exchange of views. We do not break off democratic dialogue, even in difficult times. In our work we orientate ourselves towards the values of a democratic, liberal society governed by the rule of law.

Via our digital information and educational programmes in more than 60 languages and a network with 95 libraries, we offer a space to learn, meet up and participate. We use innovative technologies, seize the opportunities of digitalisation and, at the same time, reflect on their implications for people and society. Through diverse formats such as information trips for multipliers, specialist exchange between experts, youth exchange programmes and international festivals we enable communication on a worldwide basis.

The Goethe-Institut in Irland

Ireland's increased orientation towards the European continent in the wake of Brexit has opened a new window of opportunity between Germany and Ireland to get to know each other better and to build new cultural bridges.

Having opened its doors on Dublin’s Merrion Square in October 1961, the Goethe-Institut has long played an important role in sharing a contemporary image of Germany, fostering cultural cooperation and exchange, and promoting the knowledge of the German language.

Over the past six decades, more than 50,000 language students have passed through the institute’s doors; and it has hosted more than 5,000 events and projects, including exhibitions and concerts, film screenings and readings, artistic performances, artists’ residencies and more. During the same period, the institute’s library holdings have grown year on year: between its global online library service (Onleihe) and its library on Merrion Square, almost 30,000 titles can currently be accessed by anyone, free of charge. In addition, the library is a welcoming space for individuals and groups.

The Goethe-Institut came to Ireland in the same year that Ireland submitted its first application to join the European Economic Community (EEC), and it has had a steady presence in Ireland ever since. It has been the first point of contact with Germany for generations of people in Ireland, and it has always worked to provide space and opportunities for intercultural discourse and exchange.

As an organisation with a strong emphasis on collaboration, the Goethe-Institut in Dublin has built many long-lasting relationships with fantastic partners in Ireland and beyond, and they are committed partners for all who actively engage with Germany and its culture.

Looking towards the future

In 2022, the Goethe-Institut will explore its role against the backdrop of developments such as Brexit and Covid-19, and in the context of topics such as environmental challenges, representation and access, and opportunities offered by advancing digitisation and new digital technologies like in the transregional project "Living in a Quantum State".

The Goethe-Institut will provide a platform to discuss these challenges with its partners; to find out which areas are of particular importance to them; and to consider how the Goethe-Institut in Ireland can support them in a meaningful, comprehensive and sustainable way.

As Ireland is increasingly turning towards Europe in the wake of the UK’s departure from the EU, ties between Ireland and Germany are growing ever closer. In addition to strengthening political and economic links, the Goethe-Institut has observed a burgeoning interest in Germany from people in Ireland, particularly from younger people, many of whom are considering Germany as a place to live, or have moved there in recent years. Similarly, Ireland is attracting many young professionals from Germany.

The Goethe-Institut sees itself as an important cultural mediator in this regard, who can offer an introduction to German culture, facilitate cultural exchange and provide modern language teaching. The Government’s current strategy for foreign languages in education, ‘Languages Connect’, emphasises the need for education providers and employers to work together to increase awareness of the importance of gaining proficiency in foreign languages.

The Goethe-Institut is responding to this by developing new initiatives that combine learning German with professional orientation. The ‘Enterprise German’ programme, for example, which connects Irish schools and universities with German companies in Ireland, is proving highly successful. The institute is also working with partners to develop business communication online courses, designed specifically for Irish export companies.


About the Goethe-Institut Irland 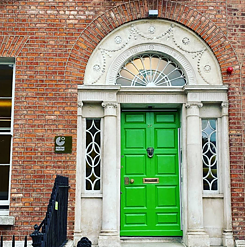 (C) Goethe-Institut Irland  The Goethe-Institut is Germany’s cultural institute, which is active in 98 countries worldwide. It opened its doors in Ireland sixty years ago, in 1961, and is based at 37 Merrion Square in Dublin.

It operates from a European perspective and works independently, without political ties. Its objectives are to promote the knowledge of the German language, foster cultural collaboration and exchange, and convey a contemporary image of Germany. It does this through maintaining and building relationships with partners from the cultural and educational sectors in Ireland.

The institute runs an extensive cultural and events programme, offers language courses and qualifications, and an on-site and online library, which combined holds more than 30,000 titles. These can be accessed by anyone, free of charge, once registered. To find out more, visit: goethe.de/Ireland.

Our Jahrbuch (Annual Report) offers a comprehensive overview of the work of the Goethe-Institut.